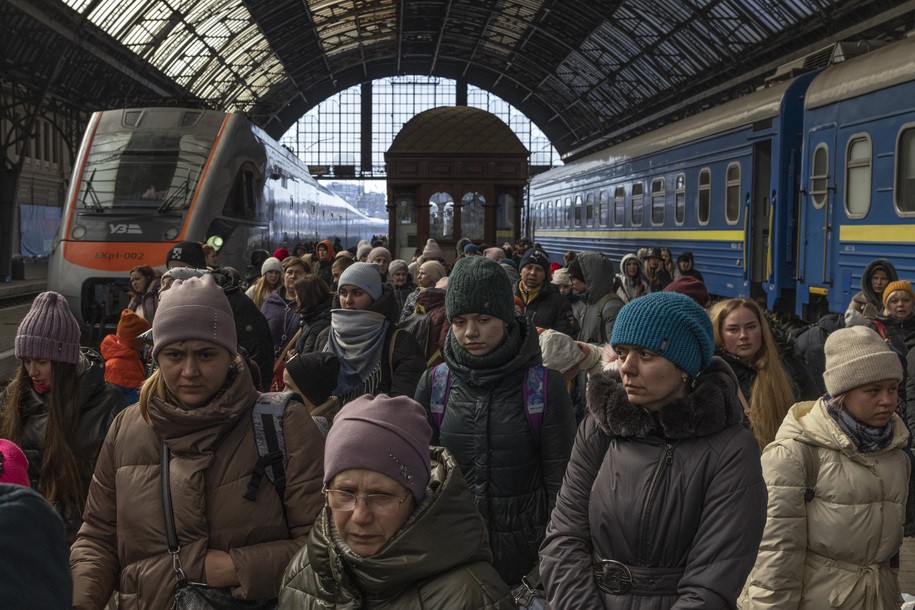 Women and children from elsewhere in Ukraine arriving in Lviv, March 11, 2022.

A week before the war began, it was clear to everyone except Vladimir Putin that he was about to direct his nation into a disaster that would ultimately be worse for Russia than for Ukraine.

When Putin started the buildup around Ukraine, he may have thought that he had this in the bag. After all, Donald Trump spent four years attacking allies, running down the North Atlantic Treaty Organization (NATO), and showing Ukraine that all the U.S. wanted from them was more corruption. The most important European member of NATO is heavily dependent on Russian natural gas. The pandemic has left the U.S., Canada, and the U.K. even more politically divided—with the assistance of some good old fashioned propaganda. Ukraine itself has still been unable to shake off two decades of deliberate Russian interference, invasion, and funding of separatists. This must have looked like a cakewalk. 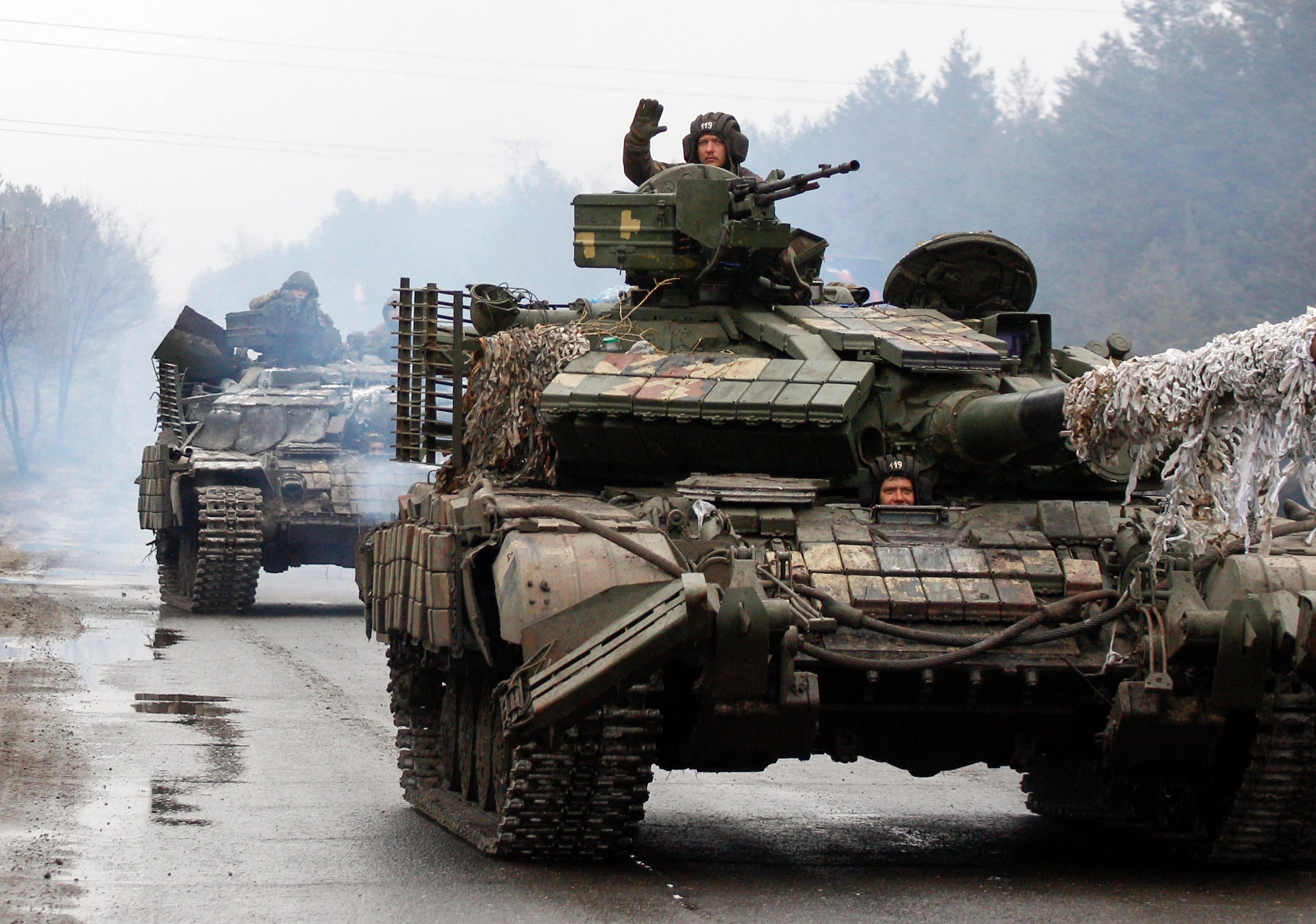 Ukrainian tanks on their way to confront Russia’s invasion, Feb 25, 2022.

What better symbol could there be for the opening day of Russia’s invasion of Ukraine than what occurred at Snake Island? Confronted by a flotilla led by the flagship of Russia’s Black Sea Fleet, the small number of Ukrainian defenders in this small offshore facility had what may be the defining conversation of the entire war.

Russian warship Moskva: “Snake Island, I, Russian warship, repeat the offer: Put down your arms and surrender, or you will be bombed. Have you understood me? Do you copy?”

Hey, how did that turn out? We’ll definitely get to that. A woman sits in Dorohozhychi subway station in Kyiv, March 2, 2022.

Sure, Snake Island had the snazzy reply, but there may be no better example of how Russia’s poor planning and Ukraine’s quick thinking would define the next 10 months than what happened at Antonov Airport in Hostomel, 10 kilometers northwest of Kyiv.

Within hours of Putin’s declaration that a “special military operation” was underway, Russian airborne special forces dropped into Antonov Airport and began to take over the facility. More Russian troops were on their way, not just coming down the highway from Belarus but bound for the airport on two immense transport planes. The airport offered tremendous strategic value, and Russian forces were so confident in their position that they even welcomed in news crews to film them calmly taking positions around the airport.

Then Ukrainian forces fought back and wrested the airport away from Russian troops. They also purposely damaged the runway too badly to allow Russia to land those big transports. A day later, reinforcements began pushing Ukraine out of the airport again, but by then Russia has missed this chance to quickly capture a functional airport on the outskirts of Kyiv. 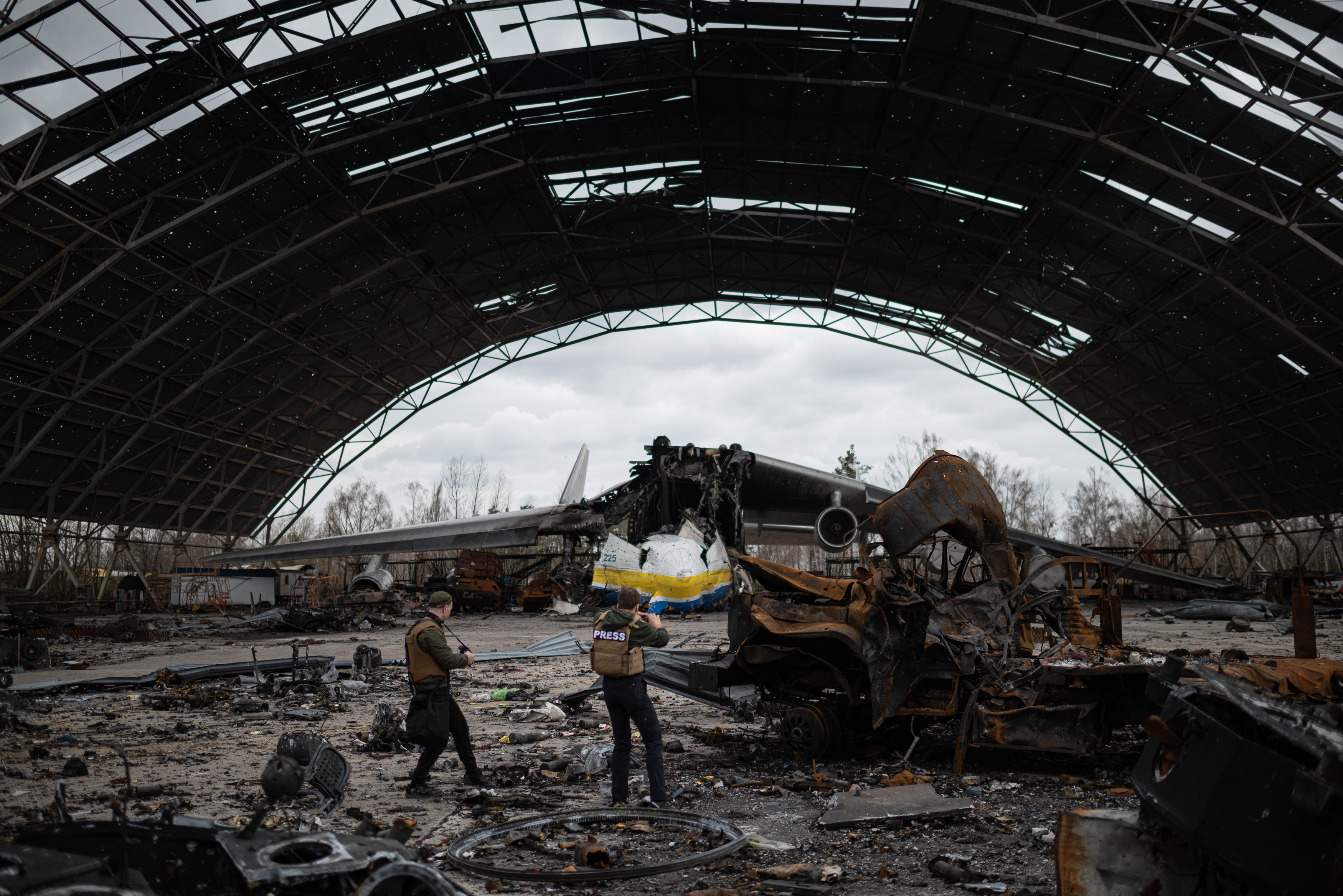 The destroyed Ukrainian Antonov An-225 “Mriya” cargo aircraft, the largest plane in the world, at Hostomel, April 8, 2022.

Truthfully, that quote heard round the world might not be a quote at all. It wasn’t recorded, and it wasn’t until a U.S. official repeated what Zelenskyy reportedly said when offered a ticket out of Kyiv that the phrase gained credibility. But even if it wasn’t a perfect quote, it was a perfect definition of who Zelenskyy turned out to be. His presence in the streets of Kyiv in those first days, visibly walking among the citizens, pulling members of his Cabinet in his wake, trading his suit for an olive-drab T-shirt … it was all pitch perfect. The man everyone needed at the moment they needed him most. 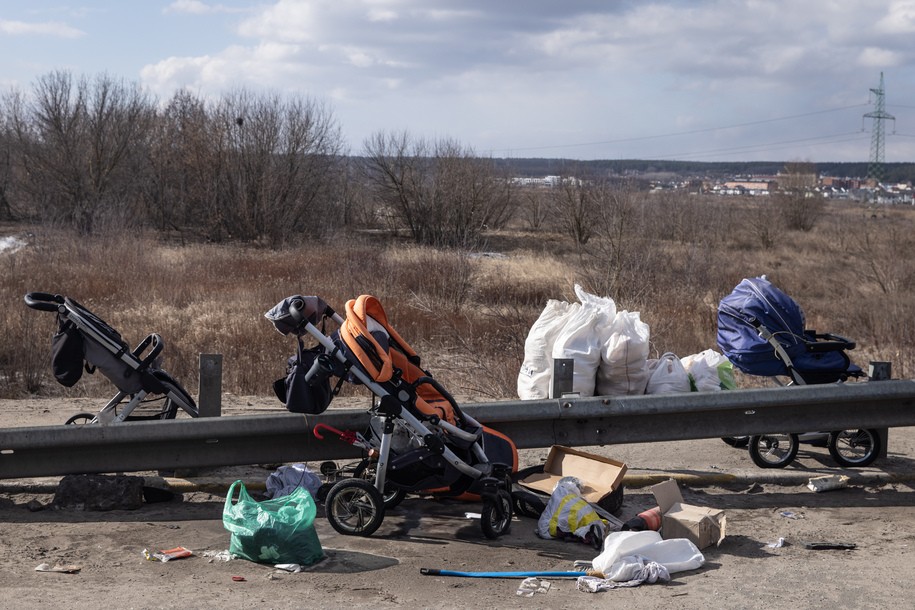 Strollers left on the bridge outside Kyiv as families snatched up infants and ran because of Russian forces shelling the area, March 10, 2022.

This wasn’t so much a moment for Ukraine as it was a moment for how the media covered the war in Ukraine. The 20-, or 30-, or 40-kilometer convoy was an event spread out over days, a much-hyped grindingly slow movement of Russian trucks and armors down the highway from Belarus. What was significant about it was the the media played it up as a good thing for Russia. It wasn’t just Putin who expecting Russia to take Kyiv in days—it was much of the American news media. They treated that 40-kilometer convoy as if it represented an unstoppable force on its way to smash through Ukrainian forces, when the truth was the whole thing was symbolic of Russia’s inability to plan and operate a large force far from its own borders. 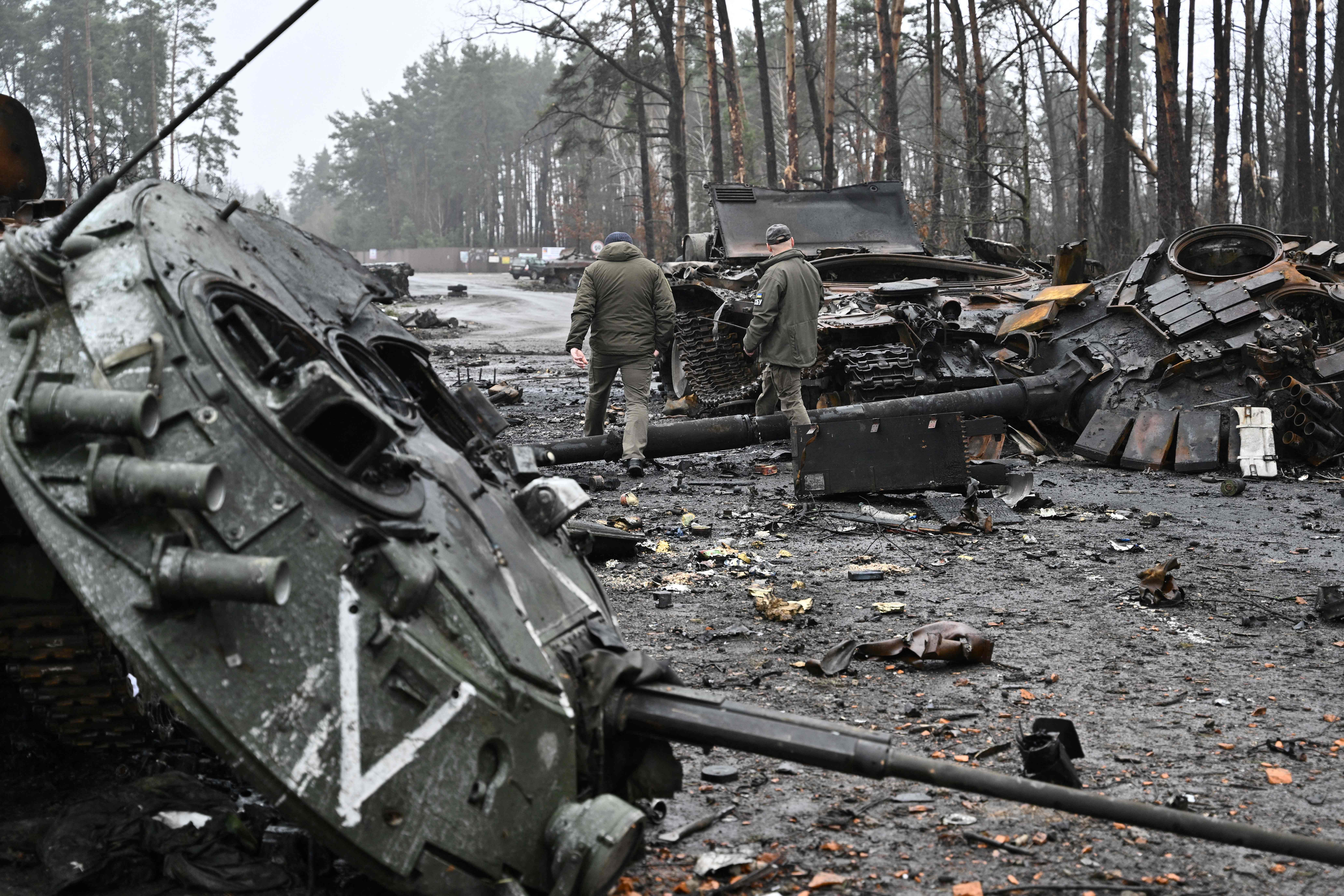 Two weeks into the fighting, Russia had not captured Kyiv. However, it still seemed to be coming ever closer to making that a reality. On this date, some of the first images out of Irpin and Bucha revealed the true horror of Russia’s actions. Meanwhile Amazon was selling “Z” T-shirts and Tucker Carlson was proudly cheering on Putin’s horde each night.

It was on this day, as the bridges into Kyiv were falling and people were scrambling over the river, passing children from hand to hand, that Ukrainian soldiers searching through a destroyed Russian tank discovered that Russian forces might not be well supplied in most ways, but they had brought with them their dress uniforms to prepare for a victory parade in Kyiv.

It wasn’t until this point, about two weeks into the fighting, that the U.S. banned the sale of Russian oil, the EU pulled together its first sanctions, and Western companies began to desert Russia in droves. The discovery of the dress uniforms at the same time that people were beginning to realize Ukraine would not fall in a matter of days seemed like a perfect match. 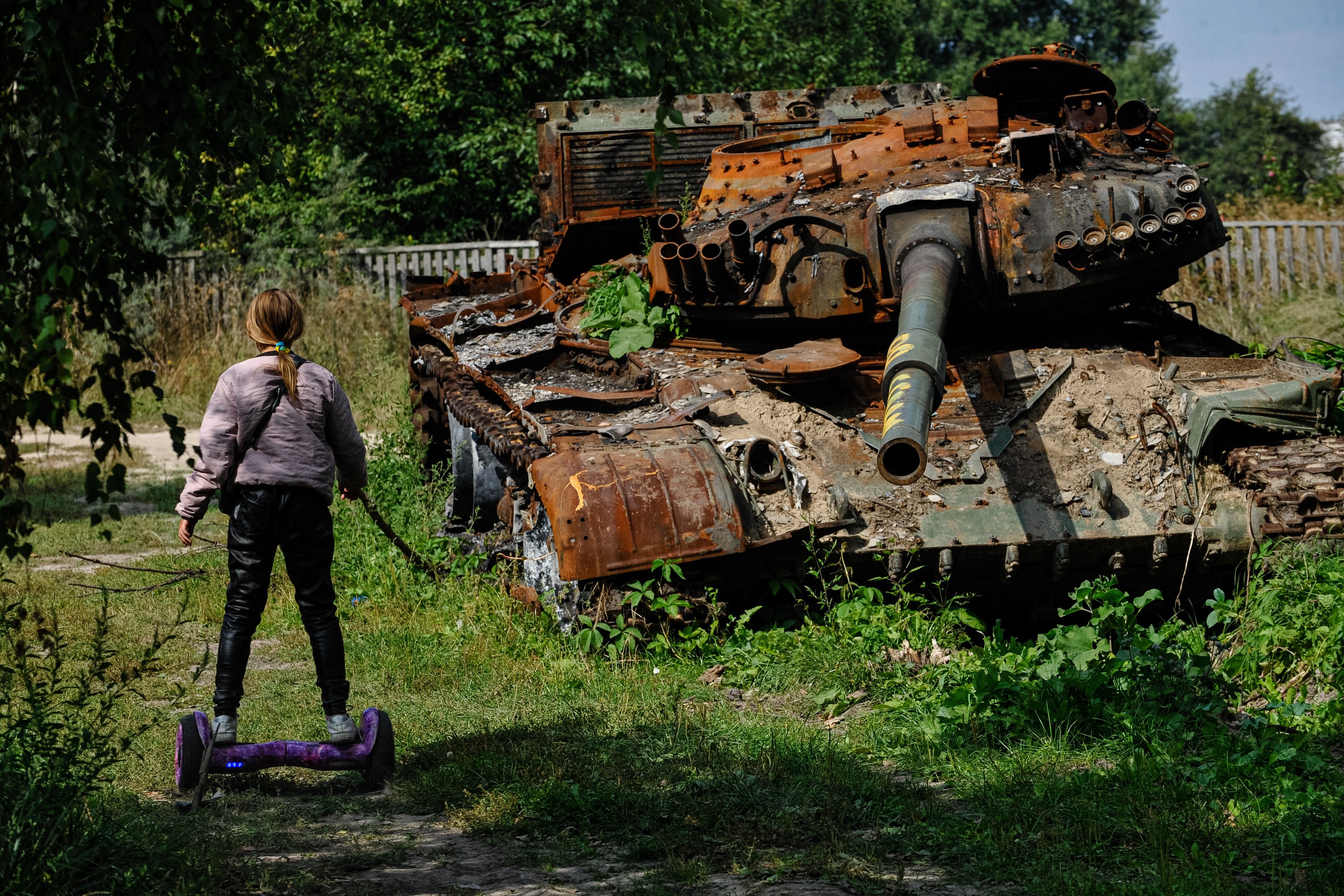 Ukrainian girl rides a hoverboard past the burned out remains of a Russian tank, Chernihiv oblast, Sept. 7, 2022.

There are too many instances of rampant cruelty to single them all out. As of this writing, over 53,000 Russian war crimes are under investigation. However, if there’s a moment of utter horror that defines Russia’s absolute disregard for life, decency, and anything that resembles humanity, this is the one. Mariupol had already withstood days of shelling at this point. In spite of a sign noting that there were children sheltering inside the city’s beautiful drama theater—a sign made to be visible from the the air—a Russian pilot bombed the building on March 16, leading to between 500 and 600 deaths. Russia has since built a facade around the site that hides the ruins behind pictures of Russian artists. 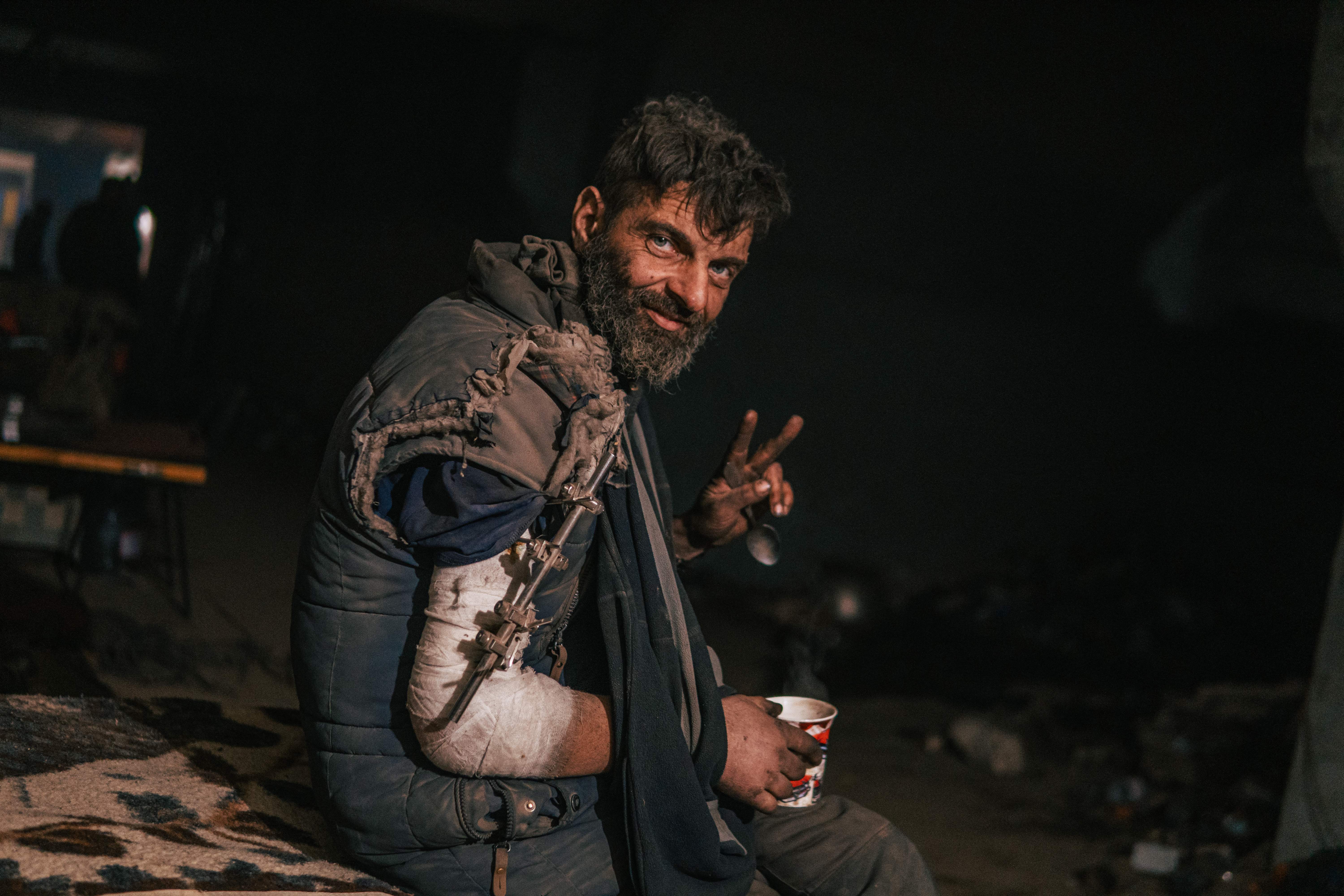 Injured Ukrainian serviceman inside the Azovstal iron and steel works factory in eastern Mariupol, May 10, 2022.

It may be years before analysts and military historians are able to sort out just how much of what’s happening now in northern Ukraine is the result of Russia seeking to consolidate territorial gains to the south, and how much is simply having their asses handed to them in a bucket (My guess: 10%/90%). But in any case, on Friday the list of Ukrainian cities and towns liberated, and the collection of Russian equipment left behind, is growing almost too quickly to catalog.

On this day it was clear that Ukraine was making a breakthrough, but everything was in such flux that it wasn’t even clear that the movement in Kharkiv was going to be the breakthrough.

On Tuesday, Ukrainian forces made a sudden and forceful attack in southern Kharkiv oblast near the town of Balakliya. By all accounts, this attack caught Russia by complete surprise. Ukraine apparently managed to move enough force into the area that they had an advantage in both men and armor. Also they reportedly used NATO-style combined arms tactics, with armor, infantry, artillery, and air support all working in concert. When a core of resistance prevented Ukraine from immediately capturing Balakliya, they didn’t stop. They took Bairak to the south. They took Vrubivka to the north. They completely encircled Balakliya and they just kept going. 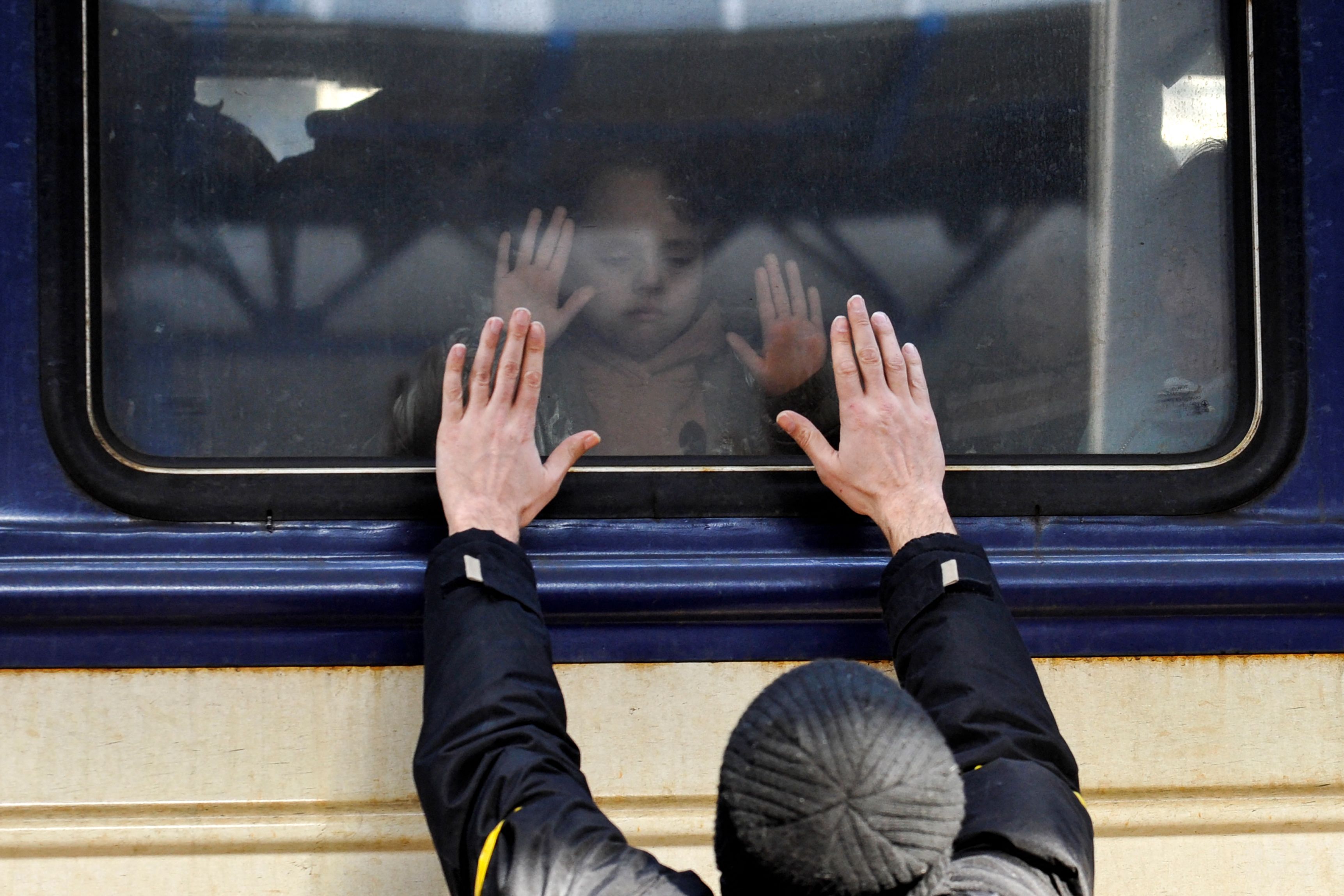 A man says goodbye to his child on an evacuation train, Kyiv central train station, March 4, 2022.

Put this down as a day where the predictions were hopeful and also, thankfully, turned out to be right. Maybe it’s not so much that I’m glad I was right on this one as it is that I’m very glad the “experts” were wrong.

The conventional wisdom has flipped 180 degrees in less than a week. Rather than waving bye to Russians retreating across the Dnipro, everyone—from Ukrainian officials to television analysts—are now expecting Ukraine and Russia to face off for The Mother of All Battles III: Kherson Showdown. The number of articles in the last few days saying that Ukraine will face a “tough fight” in Kherson likely exceeds Russian casualties in the war. This Newsweek article is typical, with the inclusion of this stomach-dropping quote:

“The Russians are going to leave behind nothing but dust,” one former resident predicted. “The only question I have is whether it will be worse than Mariupol, or only as bad as Mariupol.”

Somewhere in this, I realized that 10 wasn’t nearly enough. Where are the weeks of fighting in Severodonetsk? Where’s the long fight at Azovstal? What about Russia finally capturing Popasna after that little town gave its literal all? The whole protracted early act around Kharkiv where every bridge on the Siverskyi Donetsk seemed like a goal just out of reach? Where’s the bombing of the bridge? You know, the critical bridge. Not that bridge, the other critical bridge, the one that defined everything that was going to happen next. Where’s the sinking of the Moskva? Oh. Hang on a second. #0 The Sinking of the Moskva 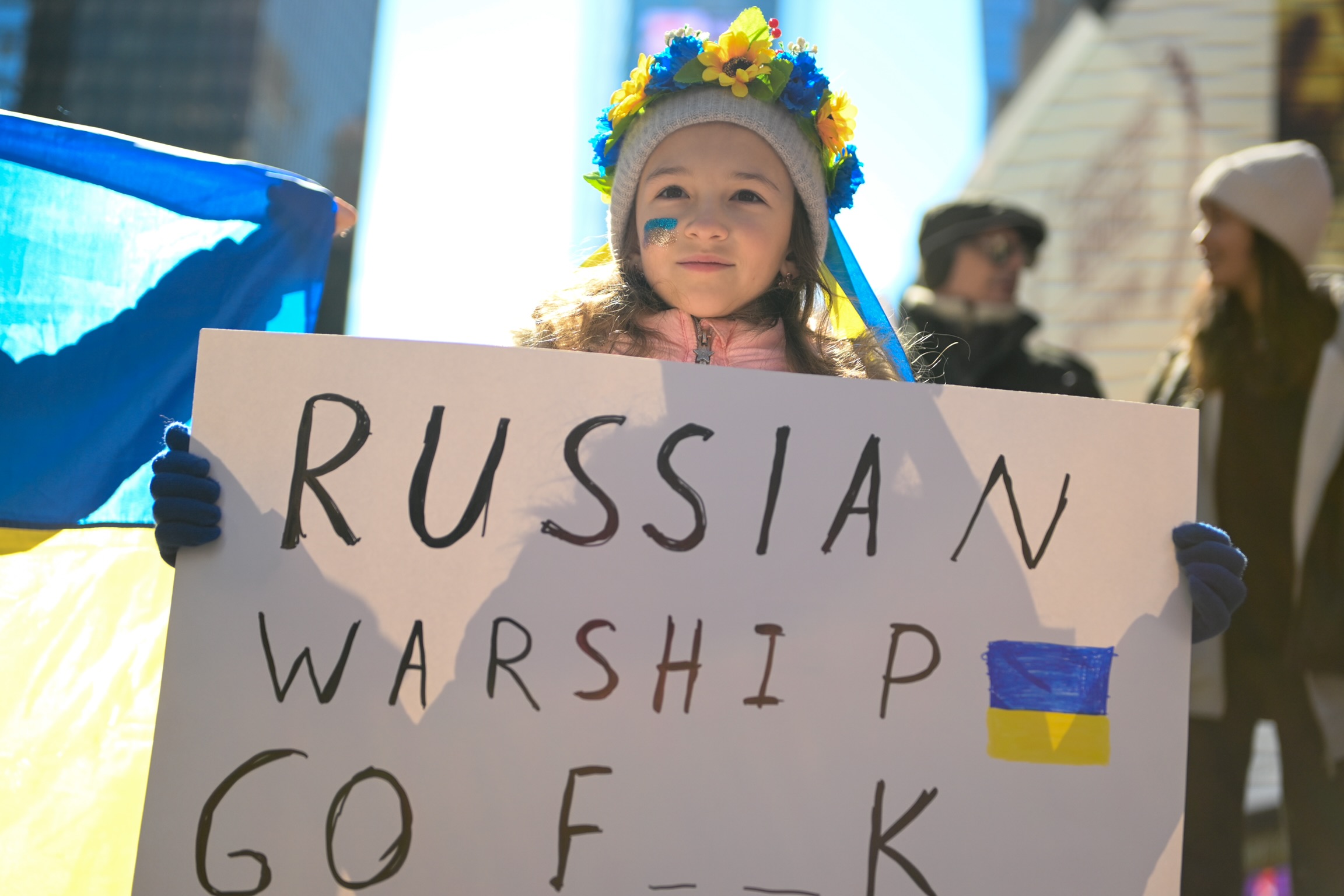 So many moments, good and bad, didn’t make this list. Once I started looking, so many things happened in the opening days of the invasion that were so critical to what came later that I just couldn’t let them go. So everything that happened after March got short shrift.