Bracing for another massive wave of Russian attacks on Ukrainian cities

At this latest round of attacks is still only an expectation, not a fact. Should fears of a massive wave of attacks on Tuesday emerge, look for additional updates.

In early November, Ukraine received its first NASAMS (National Advanced Surface-to-Air Missile Systems) which integrates U.S. and European components into a series of networked launchers that can take down incoming missile at a range up to 50km. A second unit is now reportedly in place and additional NASAMS units are on the way.

In many areas, Ukraine is currently dependent on the older S-300 missile system, which dates back to the Soviet era. More S-300 systems have been provided by European nations. Ukraine also has other older defensive systems, including ZU-23 anti-aircraft guns and 9K33 Osa missile systems. Ukraine has also captured several air defense systems from Russia, including at least four Pantsir surface-air missile systems.

The Iranian Shahed 136 drone, which was so devastating when Russia first began launching them toward Ukrainian cities in September and October, has become less effective over time has Ukrainian forces have learned how best to bring them down with man-portable missiles or machine gun fire. However, there low flight profile can make them difficult to spot until very near the target, and some percentage of these drones are still getting through. With a reported cost of only $20,000, taking these drones down with high-end air defense systems where every shot is significantly more expensive quickly becomes problematic.

While the Shehad drones have been primarily used against civilian targets, Russia’s Lancet drone has been increasingly their go-to solution in the field. Part of the reason that the number of Russian armored units lost in the area around Bakhmut has decreased, even as the number of troops lost each day has remained at ghastly levels, is how much Russia is leaning on these drones. Drones and human waves operating under artillery cover seems to be the new version of “combined arms” that Russia has concocted in the area.

But though the Lancet has quickly gained a fearsome reputation, not every strike is all that effective. For example, if all you saw was the first part of this video, this hit on a D-20 howitzer may look devastating.

But keep watching for a few minutes, and the result of the Lancet strike turns out to be … a flat tire. All those “lancet destroys X” videos may be counting a lot of deaths that aren’t real.

On Tuesday morning, the Ukrainian government announces that it has a 30% deficit in electricity and that more widespread rationing and lengthy blackouts can be expected in many cities. This announcement comes just two days after the the state energy company, Ukrenegro, reported that most power had been restored in Kyiv and that they have even successfully restored power lines to Kherson and other recently liberated cities.

However, replacing damaged power plants is expected to take much longer, and there are fears that additional damage from Russia will keep Ukraine facing extensive blackouts until better air defenses allow addressing energy production, as well as distribution. With fears of another Russian wave attack looming, there seems little that the company can do to harden the electrical system against potential damage.

Over the past few months, thousands of generators—from human-portable to rail-car sized—have been sent to Ukraine to allow backup power for hospitals and other critical infrastructure components. This has helped to keep the lights on in these facilities even when Russia has taken out local power. Longer term, multiple nations have pledged to help Ukraine replace the damaged power plants. Earlier this month, the U.S. announced that it would work with Ukraine on construction of a Small Modular Reactor (SMR), a new design for nuclear plants that is expected to be much safer than large older plants.

Numerous images have emerged on Tuesday of a very large explosion near the Russian city of Chelyabinsk. Russia which is over 1,500km away from Ukraine near the border with Kazakhstan. Russia has reported that this resulted from too much explosives being using in a blast meant to shatter rocks as part of a construction project, and is not an act of sabotage or war. Right now, it does appear to be an isolated incident, whatever the cause.

Things have been looking very grim south of Bakhmut over the last 48 hours, with reports that Russia had fully captured the towns of Ozarianivka and Optyne. However, on Tuesday morning this does not seem to be the case. Both towns are reportedly still in dispute, with Ukrainian forces holding on to locations in areas of both. Ukraine still appears to have full control of Kurdyyumivka, which falls between the two areas of dispute. 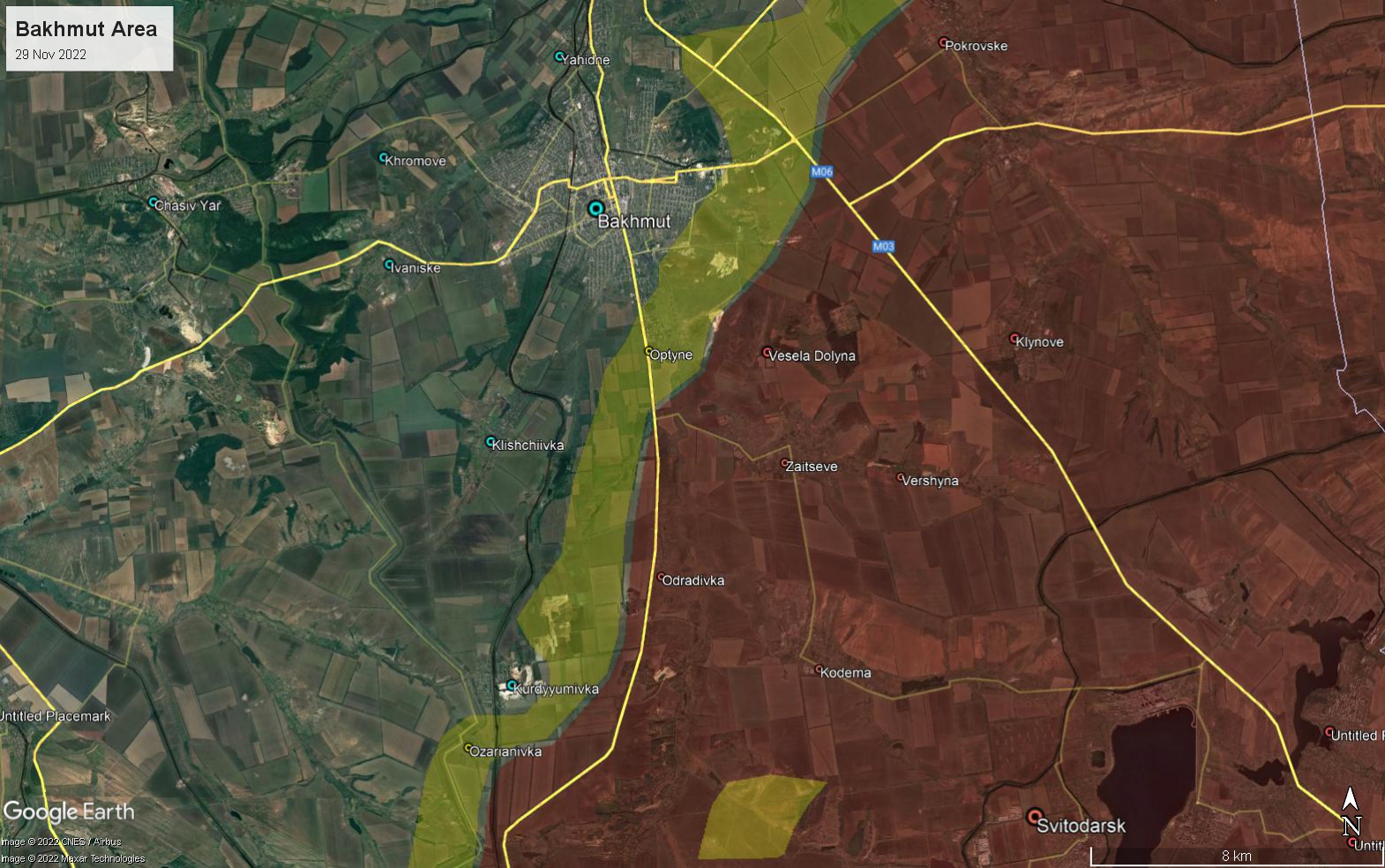 Russian forces attacking south of Bakhmut. Open image in another tab for a closer look.

(NOTE: The little yellow blob east of the highway is an error that somehow appeared on the map after it was saved to an image. Please ignore it. All of this area is under Russian occupation.)

In the last two weeks, Russia appears to have shifted much of its effort in the Bakhmut area south of the city. It has gained ground along the the T0513 highway and the assaults along this line from south of Ozarianivka up to Bakhmut have been particularly intense. On Monday evening, Russia appeared to be pushing west toward the rail lines north of Kurdyyumivka and toward two small villages in this area. If Russia takes this area, they would be better positioned to move toward Bakhmut from the south.

At this point, the number of Russian forces lost in the attempt to capture Bakhmut numbers in the tens of thousands. Capturing the city no longer represents a significant strategic goal, as Russia is no longer positioned to make a serious play for all of Donetsk. The areas along the front line have been so reduced, that the comparisons to World War I battlefields are made daily.

Taking Bakhmut would gain Russia nothing. But the cost of the battle over this city continues to rise with high casualty rates on both sides. Ukrainian defenders at Bakhmut have seen the worst fighting and worst conditions of the war. And they’ve seen it for months on end.

I’m going to have to add some whole new categories of drones to the guide.

Germany will transfer 14 THeMIS Milram Robotics robotic ground complexes to Ukraine, which are designed to transport the wounded military personnel and cargo. pic.twitter.com/FjqvnF8GR1

It shows just how bad the war is going for Russia. pic.twitter.com/4ivyt5BpDh