»  Membership in Christian churches is dropping like a stone, and 72 percent of you place most of the blame for the desertion on the lunatic MAGA cult and its “angry god” mega-church grifter allies.

»  In early August, when asked to complete the phrase “____ in disarray,” 54 percent of you chose Republicans, 46 percent chose pundits, and 0 percent chose Democrats.

»  32 percent of Daily Kossacks ride a bike frequently or sporadically. 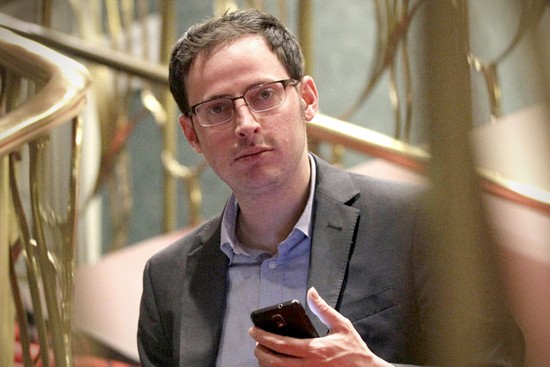 As a courtesy, all C&J polls are kept far, far away from Nate Silver.

»  After the House voted 267-157 to codify same-sex marriage rights into law, 99 percent of you agreed that the Senate should pass it, too (which it still has not done).

»  Regarding the components in the Inflation Reduction Act, 47 percent like the tax hike on the rich (and increased IRS scrutiny) the best, followed by the climate provisions (32%) and Medicare being allowed to negotiate lower drug prices (20%).

»  Only 4 percent believe Russia should not be designated a state sponsor of terrorism, and only 2 percent do not support President Biden’s student loan debt relief plan.

»  And 85 percent of you believe calling the six MAGA cultists on the Supreme Court “toddler poo for brains” is unfair to actual toddler poo.

As always, thanks for participating in our C&J polls. If you’re on Weight Watchers, remember that voting counts as 16 cardiovascular workout points.

And now, our feature presentation…

Note: On the advice of my feng shui coach, I moved the bearskin rug over the sinkhole. Mind your step.

Days ’til the midterm elections: 36

Days ’til The Great Highwood Pumpkin Festival in Illinois: 3

Number of House districts that have, respectively, a Democratic and Republican lean, according to chief political analyst Nate Cohn at The New York Times: 215 / 220

Years since Cohn has seen district maps this close: 40

Minimum number of shootings at U.S. schools this year: 130

Current public support for, respectively, the Labour party and the Conservative party in Britain following Liz Truss’s first two weeks as prime minister, according to a YouGov poll: 54%, 21%

Puppy Pic of the Day:  Good on ya, Curly…

CHEERS to October. Busy month ahead! Autumn kicks into high gear for leaf-peepers, cider-lovers, flannel wearers, and pumpkin spice nerds. The Supreme Court, now including the chamber’s first Black woman, gavels itself into session. Pink ribbons proliferate for breast cancer awareness month. The Nobel Prizes will be doled out starting today, and this year I’m the favorite to win in the category of “Just You For Being You.” Plus: 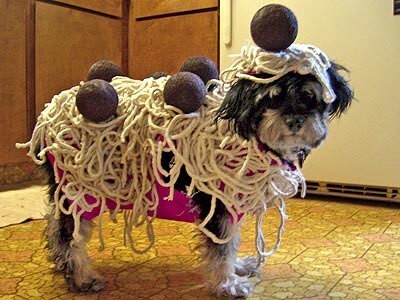 Dogs: you might wanna find a good hidey hole until November.

Barack and Michelle Obama celebrate their 30th anniversary today. October’s full moon (the 9th) is called a “Hunter’s Moon” because it’s in the shape of a laptop Ha Ha Ha Ha Topical Moon Humor!  Advocates for the right to keep and bare arms—lots and lots of arms—will celebrate World Octopus Day on the 8th. It’s LGBTQ History Month and the 11th is “Coming Out Day.” Plus it’s also “ex-gay awareness month” during which we’ll all reflect on how there aren’t actually any ex-gays to be aware of. Columbus Day (the 10th) becomes more of an unwanted relic as more states and communities replace it with Indigenous Peoples Day. And I’m predicting the right-wingers will boycott Halloween on the 31st because, of course, wearing masks is now worse than the holocaust.

Oh…and Ukraine will continue updating their tote board during their ongoing Russian tank blow-up-a-thon.

New movies include David O’Russell’s murder mystery Amsterdam, a biopic about Emmett Till’s mother in Till, and yet another entry in the Halloween franchise. (I keep telling Jamie Lee Curtis: if you want to finish off Michael Myers for good, you gotta haul out the wood chipper. But does she listen to me? Nooooo.) But none of them will match the high drama of the next House Jan. 6 Committee hearing.  And hovering over everything like the Tasmanian Devil on Red Bull is Hurricane Midterms, a month-long torrent of political ads, texts, emails, and stunts ahead of the November elections. Strap yourself in. Bumpy ride ahead.

JEERS to the first Monday in October. Ugh. The Supreme Court justices—three normal ones (including newbie Ketanji Brown Jackson, who was investitured in Friday) and six Federalist Society star chamber ones—are back in black and ready to roll back the hands of time this week. On their plate: letting Americans of color know their proper place in society (Spoiler Alert: below whites),  screwing around with LGBT rights, and screwing around with gun restrictions. Oh, what fun they’ll have…

The new cases on racial issues all ask the justices to adopt what challengers say are race-neutral approaches to the law, a line of argument that could appeal to Roberts based on his past votes and writings. If the court embraces those arguments, it would further weaken the landmark Voting Rights Act, end the consideration of race in college administrations, and strike down part of a law that gives preferences to Native Americans seeking to adopt Native American children. 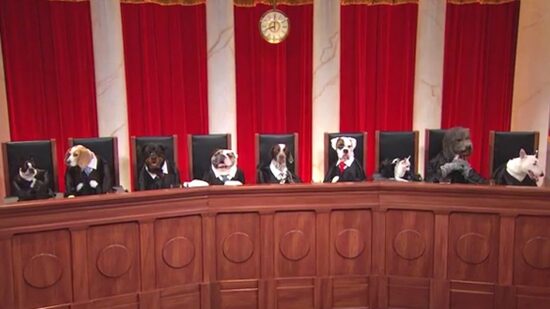 The court will tackle other contentious issues in the coming months, including a new clash between conservative Christians and LGBTQ rights in which a web designer wants to turn away people who ask her to create a website for same-sex weddings.  […]

The justices are also hearing an elections-related tussle in which Republicans are seeking to limit the power of state courts to review gerrymandered maps and restrictions on voting.

Before I forget: C&J sends our congratulations to Justice Alito for winning the annual Flies-That-Accumulated-on-the-Supreme-Court-Window-Sills-Over-the-Summer Eating Contest. Fifteenth year in a row—6.4 pounds in two minutes and 16 seconds. Hey, they don’t call him Renfield behind his back for nothin’.

CHEERS to 24 hours of vittles and gratitude.  This country is so stingy with holidays and free time in general.  It’s like relaxing = slacking or something, and it’s ridiculous.  But at least Honest Abe Lincoln gave us a little respite when he was president. On October 3, 1863, he gave a speech in which he proclaimed the last Thursday in November as “Thanksgiving Day.”  Then the tryptophan kicked in and he fell asleep. Slacker.

CHEERS to socialism: the great savior. I scream, you scream, but, above all, the hurricane victims all scream for the sharing of pooled resources from all 50 states so they can get their lives back to some semblance of normalcy cream. (Yes, I’m available as poet laureate if you need one, Joe.) While a few scattered Republicans—Hi, Matt Gaetz!—would rather watch people suffer and die, everyone else agrees that socialism is the precise solution for what clawed its way through the south last week. Yes, even Florida Gov. Ron DeSocialism. And socialism you shall get, from the most competent administration in decades:

The White House announced late Saturday that the Bidens will visit Puerto Rico on Monday and Florida on Wednesday.

This is not just a crisis in Florida. Or in South Carolina. Or in Puerto Rico.

We’ll do everything we can to get these communities back on their feet.

[T]he Federal Emergency Management Agency announcing some generators purchased for medical needs by residents will be covered by tax dollars. Residents who lost power after the storm struck in areas covered by Biden’s major disaster declaration will be eligible for reimbursement, which for now include only the Florida counties of Charlotte, Collier, DeSoto, Hardee, Hillsborough, Lee, Manatee, Pinellas and Sarasota. Additional areas could be designated after damage assessment, said the White House. […]

“To the people of Puerto Rico, we’re not gone away; I am committed to you and the recovery of the island,” Biden said after a FEMA briefing on Thursday. “We’ll stand by you for however long it takes to get it done,” he said.

As if it needs to be said: no.  There will be no flying rolls of paper towel.

CHEERS to the love-in in Lowell. “I’m not a student in your classroom,” said a testy Scott Brown as his senate rival Elizabeth Warren was in the process of handing him his dunce cap after thoroughly schooling him in last night’s debate. The biggest jaw-drop happened when Brown was asked who his favorite Supreme Court justice was and he professed his love for…Antonin Scalia. No more explanation is needed beyond Digby’s tart tweet:

“Naming Scalia is a big boo-boo. Kagan was the right answer—she’s from Massachusetts.”

Advantage: Warren. But, at the same time, it’s worth reminding everyone that there’s no reason for Elizabeth to go around measuring any senate office drapes yet. I called dibs on that job months ago.

And just one more…

CHEERS to lovebirds with longevity. “Barack and Michelle…sittin’ in a tree…K-I-S-S-I-N-G.”  President Barack and First Lady Michelle Obama celebrate their 30th wedding anniversary today. To put that in perspective, that’s longer than any of Donald Trump’s, Rudy Giuliani’s or Newt Gingrich’s three marriages (or, for that matter, the blissfully departed Rush Limbaugh’s four). Their genuine affection and support for each other while in the White House was inspiring, classing up everything from haughty state dinners to raucous campaign rallies to public service campaigns to readings of Where the Wild Things Are at the Easter Egg Roll. You simply could not see these two having a great time together and not break your face smiling.

To prove all of my points above, enjoy a few memories: 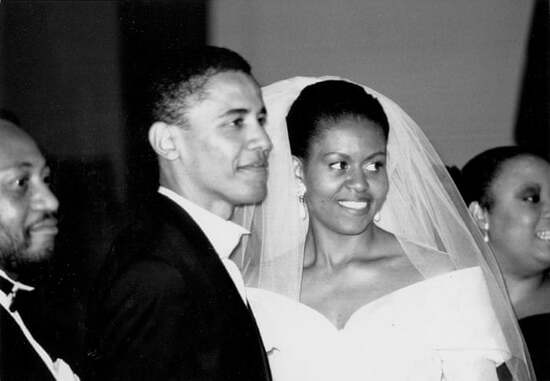 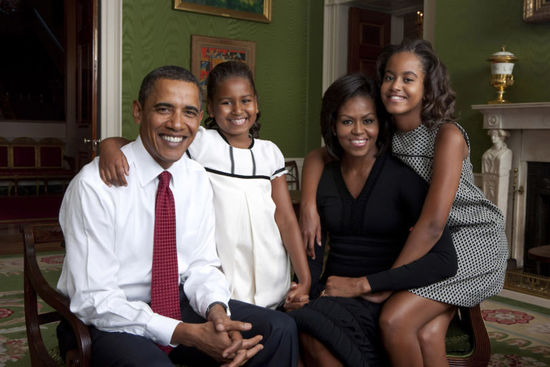 The Obamas in September 2009. Sasha’s now at the University of Michigan. Malia’s at Harvard. 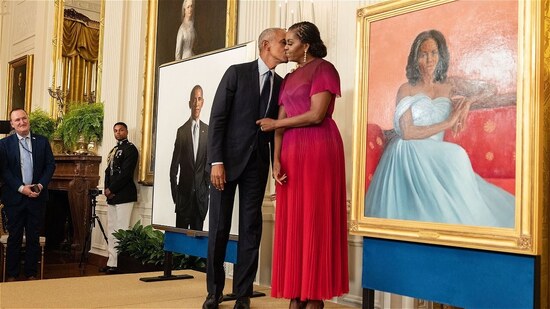 I’m told that the anniversary gift for year 30 is pearl.  I know the perfect place to get one. Unfortunately, it’s a real dive.

Have a tolerable Monday. Floor’s open…What are you cheering and jeering about today?

”The very worst moments have been times when judges have essentially reflected Bill in Portland Maine’s set of views in their legal decisions.”