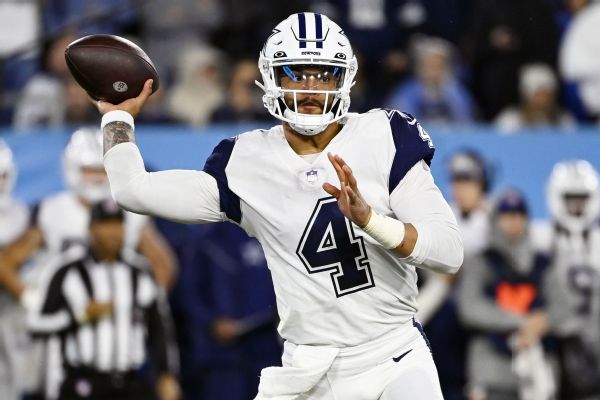 NASHVILLE, Tenn. — The Dallas Cowboys were not going to apologize for their 27-13 win against the Tennessee Titans.

“A win’s a win, and we’re going to take it and we’re going to get better from the mistakes and make sure that we’re improving,” quarterback Dak Prescott said. “But a road win, short week, you’ve got to take them all. And style points and all that, that’s for y’all who think games are won on paper.”

On paper, the Cowboys should have won by more against a Titans team that rested a number of key players, including running back Derrick Henry, and had Josh Dobbs make the first start of his NFL career. A win or loss would not have impacted Tennessee’s spot in the AFC South. Their season comes down to their Week 18 matchup against the Jacksonville Jaguars.

The importance of the Cowboys’ Week 18 matchup against the Washington Commanders will be determined by how the Philadelphia Eagles fare Sunday against the New Orleans Saints. If Philadelphia wins, it wins the NFC East and clinches the top seed in the conference. If the Eagles lose, then the Cowboys would win the division if they beat the Commanders and the Eagles lose to the Giants in their finale.

He’s also a fan of his team. The Cowboys have won eight of their past 10 games, with the only losses coming in overtime to the Green Bay Packers and Jaguars. For the first time since 1994-95, the Cowboys have posted consecutive 12-win seasons. On Thursday, they overcame three first-half turnovers by Prescott, including two interceptions that raised his season total to an NFL-high 14.

Coming off an emotional 40-34 win against the Eagles at AT&T Stadium on Sunday, McCarthy knew this game would be tough, calling this stretch the most difficult of the season.

“I’m in tune with the injuries and all the things that are going on,” McCarthy said. “All the little stuff. Yeah, it wasn’t clean. This was not a clean performance. We recognize that. I’m not disputing that at all. But I do know my football team. I know that they came out of a hard victory on Sunday and took a little longer to get their bodies back. That’s what Thursday night football is. It’s a tough challenge. But the most important thing is we answered the bell and we got it done.”

The Cowboys were playing their second straight game without starting linebacker Leighton Vander Esch and were working another secondary combination with Nahshon Wright playing more snaps in the nickel defense while also coming up with an interception. On offense, the Cowboys were without leading rusher Tony Pollard, who has a thigh bruise, and lost center Tyler Biadasz in the second half to a high right ankle sprain.

“It’s just a testament to how our team fights to make it through this three-game stretch,” defensive end DeMarcus Lawrence said. “I mean the body is on fire, you know? And we still overcame and got the victory tonight.”

And now they have some extra time to get ready for Washington, although the exact date of the game has yet to be set.

“Rest,” Prescott said. “Obviously get the rest we need, get our bodies back underneath us and then mentally understanding what’s to come. Take a couple of days or two and get away from it, but know when we come back we’ve got to finish this season off on the right foot and we’ve got a long, long run ahead of us that we know we’re capable of making.”