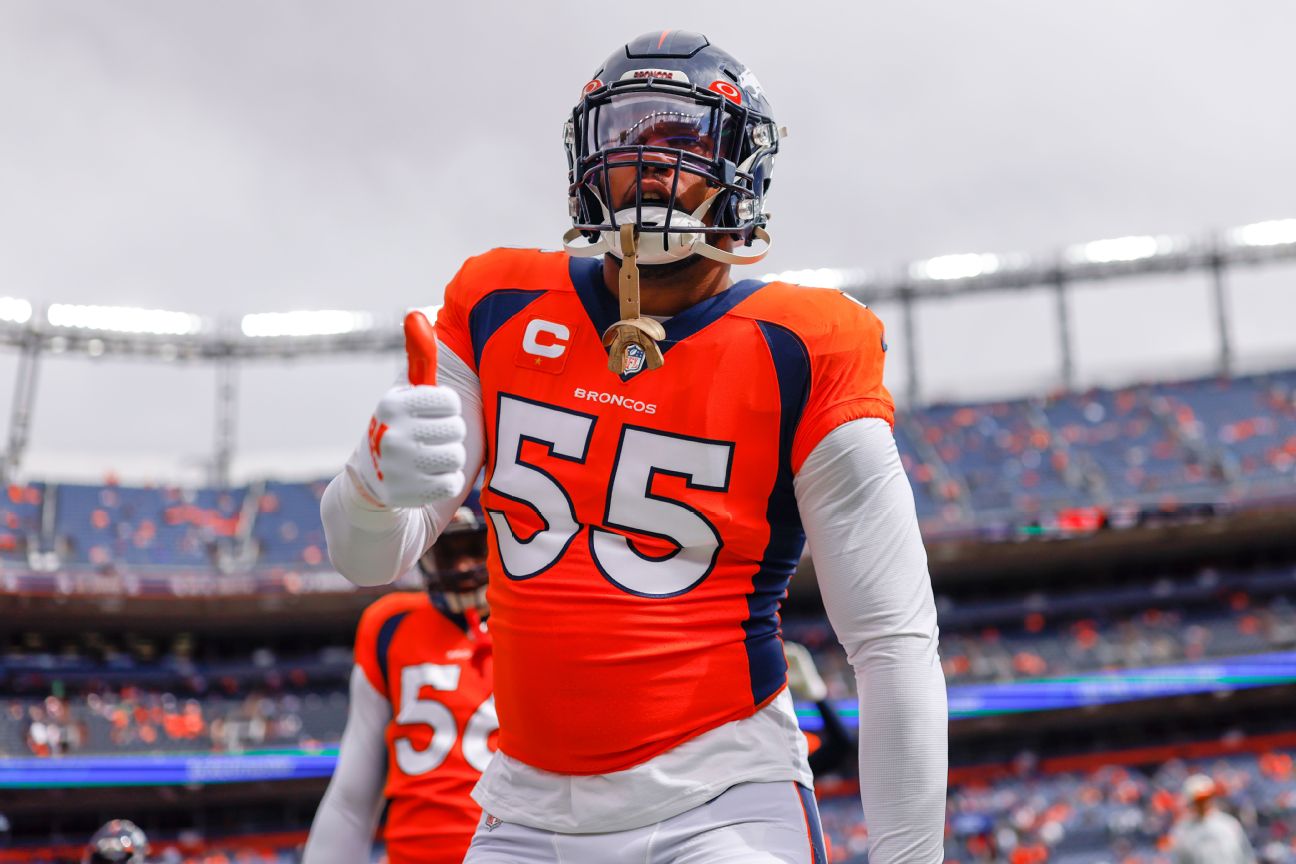 The Denver Broncos traded outside linebacker Bradley Chubb to the Miami Dolphins on Tuesday for a package that includes the 2023 first-round pick that Miami acquired from the San Francisco 49ers last year.

The Dolphins also sent running back Chase Edmonds and a 2024 fourth-round pick to Denver for a 2025 fifth-round selection along with Chubb.

The trade is pending Chubb and Edmonds passing physical exams, the Dolphins said.

Miami then replaced Edmonds by acquiring running back Jeff Wilson for a 2023 fifth-round pick from the San Francisco 49ers in a separate deal. The trade reunites Wilson with Dolphins coach Mike McDaniel and running back Raheem Mostert, his former backfield mate in San Francisco. Wilson has rushed for 468 yards and two touchdowns this season.

The Broncos, meanwhile, addressed their pass rush after dealing Chubb by acquiring defensive end Jacob Martin from the New York Jets, pending a physical. Denver sent a 2024 fourth-round pick to the Jets for a 2024 fifth-round selection along with Martin. Martin has 1.5 sacks for the Jets this season, his first with the team after signing as a free agent.

The Dolphins have pressured opposing quarterbacks on 22% of their dropbacks this season, the fourth-lowest rate in the NFL, according to ESPN Stats & Information research. Miami has 15 sacks in eight games, ranked 21st in the NFL.

Chubb is scheduled to become an unrestricted free agent after this season. The Dolphins are expected to work out a long-term deal with Chubb, sources told Schefter.

With the trade, the Dolphins will not have a first-round draft pick next year after forfeiting their own selection as punishment for tampering with Tom Brady and Sean Payton before this season.

The Dolphins signed Edmonds in free agency this year. He has rushed for 120 yards and has scored three touchdowns (two rushing, one receiving) in his first season in Miami. He will join a Broncos backfield that includes Melvin Gordon III and Latavius Murray after starter Javonte Williams suffered a season-ending knee injury this season.

The Dolphins entered the 2022 season hoping for their offense to drastically improve and for their defense to carry over its success from the 2021 season, when they led the league in defensive expected points added from Week 8 to Week 18.

While Miami ranks seventh in yards per game through eight games, its defense has sputtered, ranking 23rd in yards allowed per game and 27th in defensive EPA. Chubb fits in as a boon to a pass rush that blitzes at the sixth-highest rate in the league but owns the sixth-lowest sack percentage. The Dolphins rank 27th in pressures with 15 and 69, respectively.

With Chubb’s arrival, the Dolphins turned their 2021 trade with the San Francisco 49ers for the No. 3 overall pick into essentially Jaylen Waddle, Tyreek Hill and now Chubb.

The Broncos weren’t going to trade Chubb unless they got the return big enough to ship their 2018 first-round pick, who is having his best all-around season with the team, elsewhere. Chubb said last week he hoped to stay in Denver, but knew it was out of his hands.

“It’s good to have that come up. … It’s just cool to be in a position where the interest comes in,” Chubb said this past week in London. “At the end of the day I just let all that stuff be handled by the people who handle it. I just go out here and do what I can.”

It is the second consecutive season Broncos general manager George Paton has dealt the team’s best pass rusher just before the deadline. Last year, he dealt Von Miller to the Los Angeles Rams.

Paton has said this past week the Broncos were “not in the mode where we want to get rid of our best players,” but he has also said he would like to recover draft picks in the rounds where the Broncos no longer had picks after the deal to acquire Russell Wilson.

This deal gives the Broncos a first-round pick again next April.

Paton told reporters Tuesday that preliminary talks on a contract extension had taken place with Chubb and his representatives but trade talk “really heated up this morning.”

Paton said he would not have made the trade “without a first-round pick (included), that was obviously a key piece.”

Chubb is on track for his first double-digit-sack season since he had 12 his rookie year. He missed all but four games in 2019 with a torn ACL and missed 10 games last season with bone spurs in both ankles.

ESPN’s Marcel Louis-Jacques and Jeff Legwold contributed to this report.