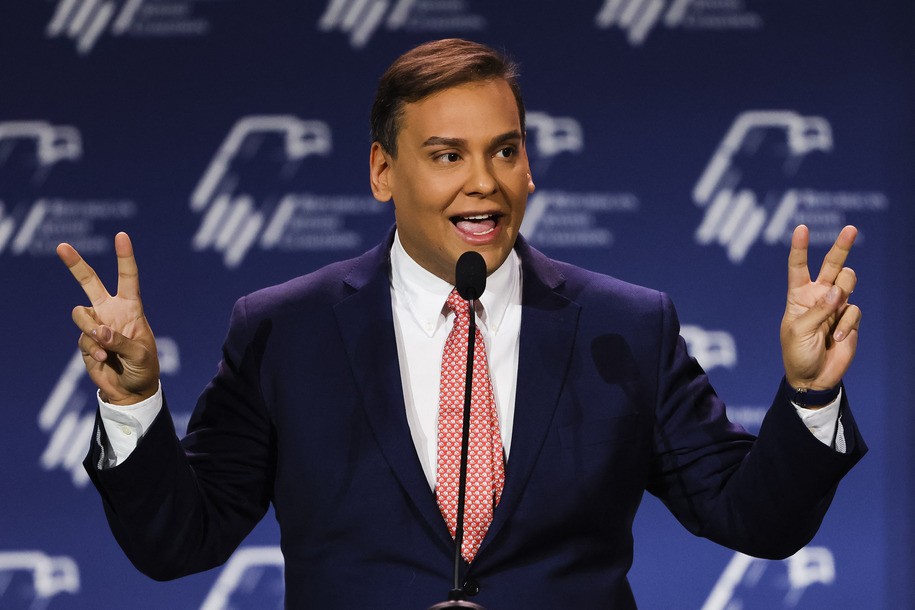 Santos doing his “I am not a crook” Nixon impersonation.

At this point in the saga of Rep.-elect George Santos, it might be easier to list the things he’s claimed about his life story that are true than the lies. It’s getting more bizarre by the day. The list of lies and inconsistencies includes his name, his sexual identity, his race, his ethnicity, his education, his professional life, his charitable work, the cause of his mother’s death and how many times she died,  his proximity to some of the nation’s deepest traumas, and—mostly importantly—how come he had so much money to give to his own campaign. Actually, that last one isn’t a so much a lie as a big omission. He’s not telling anyone where the hundreds of thousands came from. That’s also the one that could get him legal trouble.

New York’s Nassau County district attorney Anne T. Donnelly is opening an investigation to determine just how much of a fraud this guy is. “The numerous fabrications and inconsistencies associated” from Santos “are nothing short of stunning,” Donnelly said in a statement. Santos’s would-be constituents “must have an honest and accountable representative in Congress,” she added, and “if a crime was committed in this county, we will prosecute it.” Donnelly’s spokesman, Brendan Brosh, confirmed in a statement, “We are looking into the matter.”

Maybe they’ll look into how he allegedly defrauded Saint Rita’s Catholic Church, in Long Island City, Queens after his mother’s second death. Yes, second death. In one timeline he tweeted, “9/11 claimed my mothers life.” Another time he said that she died a few years after 9/11. Her documented death, though, was in 2016. At least that’s when Saint Rita’s picked up the tab for the funeral after Santos told the pastor the family could afford it. Father Jose Carlos da Silva told CBS that the church held a collection during the memorial mass and that “he didn’t count the money collected, but recalled that the amount raised was significant, and that he handed the collection directly to Santos.”

That’s the most special of them all, scamming his family’s congregation after his mother’s real death. But wait, there’s more. On Wednesday, more of Santos’s bizarre claims came to light.