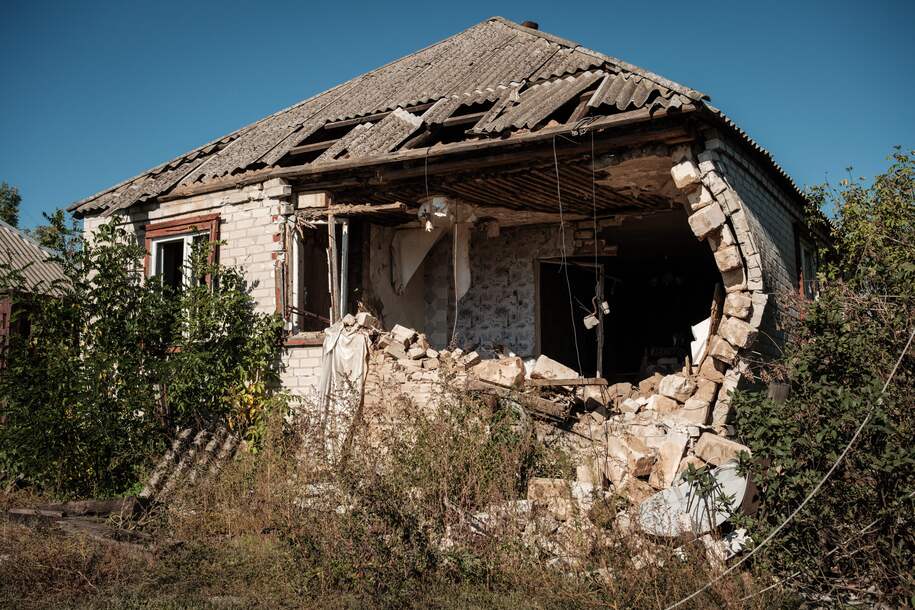 A woman continued to live in the basement of this home in Yampil after the walls were blown open. October 6, 2022.

On Wednesday, two men sailed into the port at Gambell, Alaska, on the tiny island of St. Lawrence. The population of Gambell is under 700, and over 95% of the people who live there are Native Americans of the Yupik peoples. As might be expected, it’s one of those everybody-knows-everybody places … but nobody knew these guys, because they were Russians.

The men told local officials who greeted them that they had sailed their small boat from the city of Egvekinot in Chukotka Autonomous Okrug, the easternmost of Russia’s “federal subjects.” They sailed their small boat, which was reportedly not at all the kind of craft that should have been out on the Dangerous Catch waters of the Bering Sea more than 300 miles to reach Gambell. But if the boat wasn’t prepared, it seems the men must have been, because their navigation was right on when it came to hitting one of the first locations where they could be sure to find year-round inhabitants.

The men reportedly climbed into their boat and made this journey to avoid being mobilized for the war in Ukraine. When you weigh the relative danger … they made a good choice.

The rising public disdain—for now largely aimed at low and mid-ranking officials in charge of implementing Putin’s plans rather than the president himself – is the most significant since Russia effectively banned criticism of the war by making it illegal to “discredit the armed forces” in March.

Earlier, those laws were seeing people hauled away for even reporting that Russian forces were lacking in supplies, short on training, or incapable of subduing Ukraine. Now, any attempt to enforce that rule would only add a jail cell shortage to Russia’s other problems.

Meanwhile, back at Putin’s illegal and unprovoked invasion, there are reports that the Russian line in Kherson has collapsed. Again. 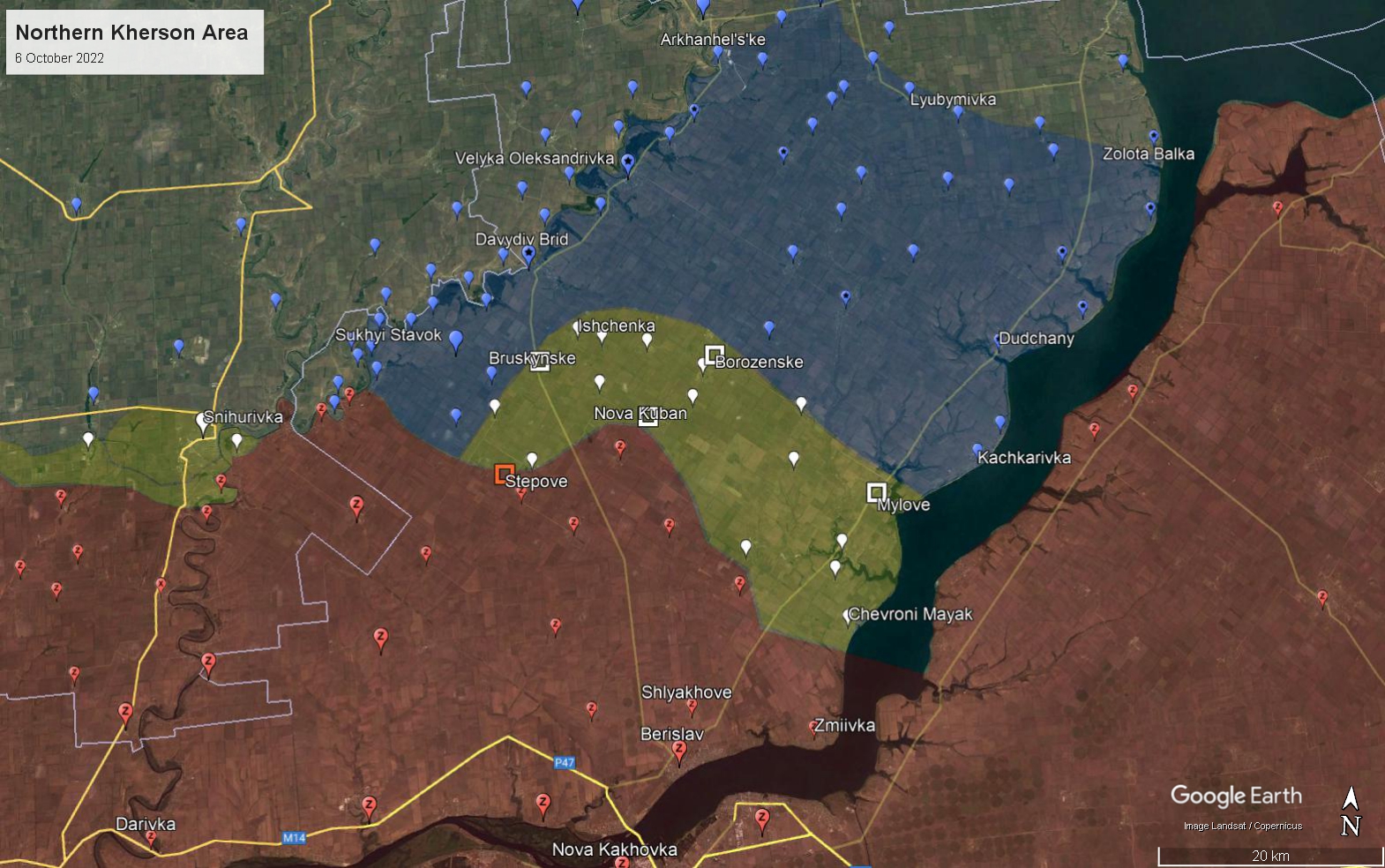 Reports indicate that the Bruskynske—Borozenske—Mylove defensive line has failed.

After three days of consistent and highly disciplined running away in a panic, Russian commanders were able to put the brakes in place better than 30km away from where the front line was last Saturday. Anchoring the left with a pair of “fortress towns” at Bruskynske and Ishchenka, and the right with Mylove, which is well positioned across a bridge that is almost certainly down, Russia created a new defensive line that was supposed to prevent any further approach to Berislav and that mostly-busted bridge at Nova Kakhovka.

However, late in the day on Wednesday, there were reports that the western end of this line was having trouble, with Ukraine both pushing around the end of the line and liberating a string of villages east of Ishchenka. Then, on Thursday, came the word that the middle of the line had started to buckle, with Russian forces dropping back several kilometers. Finally, reports that the eastern end at Mylove — in spite of a pair of downed bridges along the route from Dudchany — had broken completely with Russian forces in flight down the highway to Berislav.

However, as that big and growing slice of yellow in the middle of the map above indicated, I have a lot of reports of all this activity. What I don’t have is any kind of confirmation from either official or trusted resources.

All of this is exciting. All of this is just what I want to hear. And just how much it seems like exactly that I want, makes me distrust it that much more. There are at least two “new new Russian defensive line” maps circulating out there, but I see no reason to believe either of them.

Truthfully, I’ve been scanning Telegram and Twitter accounts, along with military blog sites, over the last hour, looking for something that would make me breathe a sigh of “okay, that looks right” relief. I’ve yet to find it.

At this point, I rate the probability that Russia has been pressed out of Borozenske, Mylove, and Ishchenka as high. But whether they’ve been completely untethered from that cluster of defensive positions on the left from Bruskynske to Stepove, I’m much less certain. I’m also uncertain about where the real line of retreat is at this time, because while sources are pitching around statements like “thrown back 10km” or “retreated 15km,” the truth is there are villages and towns in the intervening space, and I’ve seen zero reports on any fighting at those locations.

At Snihurivka, things seem a little clearer. As of mid-day on Thursday, Ukrainian forces hold the north of the city. Russian forces are mostly to the southwest, in the industrial area along the highway. But the claims that Ukraine had actually liberated the city seem to go back to an on-the-ground Russian source, who was apparently angered that Russian officers fled the town after Ukraine pressed the attack.

Meanwhile, pro-Russian accounts are blasting a steady stream of just how invincible Russian forces were today, and how the new line repelled all attacks.

When I have confirmation of the actual situation, you’ll get it.

“Why would Russia destroy their own pipeline?” makes a convenient talking point, but the biggest problem with the statement may be that they didn’t. Neither Nord Stream 1 nor Nord Stream 2 received damage that can’t be handled by their deep water maintenance crews.

In fact, by total coincidence, it seems that Nord Stream 2 has already been patched. If Germany would just give the okay for pumping gas along Nord Stream 2, Russia is ready to resume gas shipments.

That’s not going to happen.

This is the kind of “just shoot the field, we’ll hit something” artillery use I expect from Russia, not Ukraine. We’re so used to Ukraine hitting a spot on a fly’s wing at 40km that this just looks wrong.

Ukrainian MLRS rain down on a Russian SPG battery but you can see that the time of unguided missiles has passed. You can use them and still make some decent hits as shown on this video but you need so many of them that GMLRS will be more cost-effective. pic.twitter.com/mBBxIxSb6I

Why is Ukraine doing this? Well, as one source reported, they’ve captured so much ammunition left behind by Russia, they might as well use it up.

Russians re-group their equipment into scrap

We still haven’t gotten a good look at everything left behind in Lyman. But now we’re getting some glimpses of just what Russia lost as they stumbled back from the front lines in Kherson.

But this doesn’t mean that Russia was incompetent. After all, Ukraine was going forward. They had to get out of the way going backward, and with a ton of panic weighing them down.

These Iranian drones are proving to be a much cheaper way for Russia to wage their terror campaign on targets unconnected to the war, and they’re getting shot down at a rate not much better than the much faster missiles. Their low altitude and speed makes them essentially invisible to many automated anti-aircraft systems.