Free the leopards! Western tanks could be headed for Ukraine in serious numbers

Denmark has a reported 44 Leopard 2 tanks. Finland has over 200. However, many of the tanks in both countries have been in storage for years—that means leaking seals, crumbling wiring, and serious overhauls needed if great care wasn’t taken in prepping the tanks for storage. Some of the images of those Finnish tanks show them sitting in a field. Kind of like how the U.S. puts old gear out to pasture in a hot, dry desert. Except that Finnish fields are neither hot nor dry. No one should expect tanks that have been sitting there weathering through winter snows and summer rains in an open field to be joining the fight any time soon. Some of them won’t be joining at all.

A pair of Finnish politicians have launched a “Free the Leopards!” campaign through which they open to embarrass Germany enough to let its big cats go. To do so, they’re arguing that it’s time to stop having a separate stack of military vehicles for every NATO member and move to a pooled resource where tanks could be moved to where they are needed—and presumably not left rotting in a field when a particular nation doesn’t need them at the moment.

“If we can give a political signal of the larger readiness to pool resource that would negate the argument against providing tanks to Ukraine, and instead be sure it would make a significant difference,” said Green Party MP Atte Harjanne.

Assuming they get the go ahead, the tanks will have to be hauled in for retrofitting, updating, and general maintenance. Ukrainian soldiers will also need to be trained as this tank—unlike everything in Ukraine’s MBT arsenal at the moment—isn’t just a T-64 by another name.

Updated and operational Leopards might come sooner from Poland, which is reportedly once again considering driving some of its 64-tonne tanks to the border at Lviv. The U.S. has already agreed to send Poland a new stock of Abrams, making the Leopards available to lend. Poland has already sent Ukraine an astounding 240 updated Soviet-designed tanks for the fight against Russia. They are certainly not concerned about what Vladimir Putin thinks, and they have over 200 Leopards in active service. However, there are two obstacles: Poland is unlikely to surrender a large number of Leopards until they get those Abrams to replace them, and Germany still has not given their nod.

And some Polish politicians are pushing for the same kind of “shared tank pool” that Finland and Demark have been advocating.

Poland can start supplying Leopard to Ukraine only if a larger coalition is formed for the transfer of these tanks, – said Prime Minister Mateusz Morawiecki pic.twitter.com/0HhwDWiPxm

That’s highly unlikely to happen overnight. Expect NATO to draw and erase several imaginary lines before getting there.

Overall, there are good indications that Ukraine is going to get some sorely-needed Leopard 2 tanks. However, don’t expect them to arrive in time to be part of the battle for Svatove or Kreminna. Just hope they make it time to demonstrate a little of their winter prowess.

On Thursday there were reports that Russia had broken through positions at Bakhmutske and pushed Ukrainian forces back in parts of Soledar. By Friday, Russia was claiming to have taken all of Soledar. The frequency of such claims over the last few months has been so high that it was easy to ignore these Telegram channel brags at first, but over the last day Ukrainian sources have confirmed some of what Russian sources had been claiming.

Russia has reportedly pushed Ukraine completely out of the small suburb of Bakhmutske. In Soledar itself, they have neither taken the town completely, nor advanced as far as Russian sources claimed on Friday. As of Saturday morning, Ukrainian forces still held the area around the salt mine museum in the center of the town, and all of Soledar to the north and west. However, Russian forces had pushed to the area just east of the salt mine and fighting was going on in and around the large complex of buildings.

South of Soledar, Ukraine reports repelling Russian attacks on both Pidhorodne and Krasna Hora. Reaching these positions would mean Russian forces crossed a large area of open fields; a surprising development, as those fields had been a no man’s land for months.

One other thing that’s more than a little amazing is happening in the area this morning: Multiple sources are reporting that the Ukrainian Air Force is flying sorties over the area around Bakhmut, bombing Russian positions. That seems like both an incredible risk and an unmatched demonstration of just how incapable Russia has been when it comes to keeping Ukraine out of the skies.

According to publications of the Ukrainian military, Russian tactics in this advance haven’t changed—masses of people moving forward under fire while Ukrainian forces inflict maximum casualties at every step. However, the size of the assault has “ sometimes forced [Ukrainian forces] to change their positions.” Fierce fighting in the area continues after a reported ten Russian attempts to take central Soledar have been repulsed.

Despite reports from the Ukrainian MOD that an attack on Pidhorodne had been repulsed, other Ukrainian sources indicated that Russian troops had entered the small town and occupied locations along the easternmost streets. 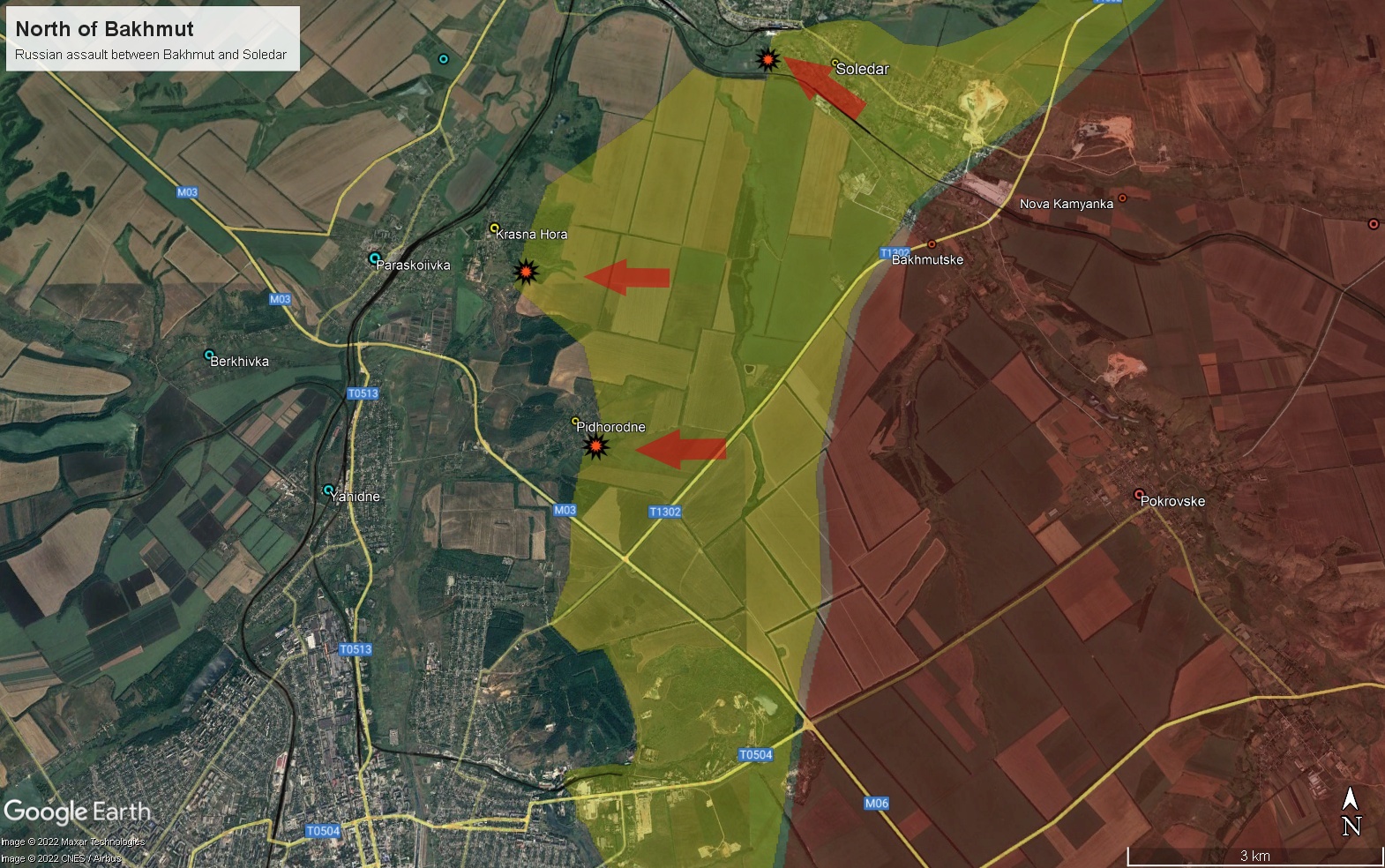 Russian assault on points north of Bakhmut. Open image in another tab for a larger view.

Should Russia take Soledar, it would not mean that Bakhmut was immediately isolated, or that Ukraine would be forced to withdraw from the whole area. However, it would not be a trivial change. Ukraine would lose control of the north-south rail line and would need to establish new defensive positions west of that line if they didn’t want Russia to encircle the city.

The fight currently going on north of Bakhmut is a serious push by Russia. Many pundits had been ready to write off Russian efforts in the area as having culminated, but this assault would seem to indicate the threat of a real, sizable Russian advance still exists. On the other hand, this could be a last-gasp, throw-everything-at-them attempt to move the needle around Bakhmut. Should whats left of Russian forces come tumbling back across those kilometers of fields in the next two days, chased by artillery as they run, it really could signal the end of Russia’s apparently endless series of attacks in this area. Or not.

It’s worth noting that Russia launched this assault began during the period Vladimir Putin claimed would be a “Christmas ceasefire.” Because he’s just the kind of guy who thinks that declaring peace then attacking is a clever strategy.

Take the “sensitive image” message on this next one seriously. After months of failed assaults, Russia has sown a terrible crop in the fields outside Bakhmut.

As kos has noted, all of Ukraine is now just one front. That’s certainly true in the east, where Bakhmut is less than 50km south of Kreminna. Had Ukraine broken through at Svatove or Kreminna before now, it’s almost certain the attack north of Bakhmut would not be happening.

But it’s not as if Ukraine is just sitting there, waiting on Western tanks or some other wonder weapon. On Russian Telegram channels, reports say that the fiercest fighting underway isn’t north of Bakhmut. It’s south of Kreminna, where Ukrainian forces are still advancing through that forest / tree farm. The daily assessment by the UK Defense Ministry notes that Russia considers what’s happening at Kreminna as a direct threat to their plans at Bakhmut. That’s meant the redirection of some T-90M tanks to the Kreminna area in the last week. At least one of those T-90Ms has been destroyed, but this morning there are videos showing a pair of the tanks taking out a Ukrainian T-72 along a highway likely just west of Kreminna. At the same time, there are reports that Russia has lost positions on the southwest edge of the city, but those same reports insist Russia is fighting to get this area back and is not withdrawing from the city.

Right now, I don’t have an updated map, because I don’t know where to draw the lines. But just as with Soledar, we may have some new reports from Kreminna by the end of the day.

There are multiple reports this morning that Russia is considering blowing up a dam near Svatove to slow the Ukrainian advance. This may seem familiar from similar stories about possibly blowing the dam near Nova Kakhovka. However, that didn’t happen. It was only after Ukraine had secured Kherson that we learned that … Russia had been seriously considering blowing up the dam near Nova Kakhovka.