It looked like a major newspaper endorsement of Mike Lee. Then things got weird 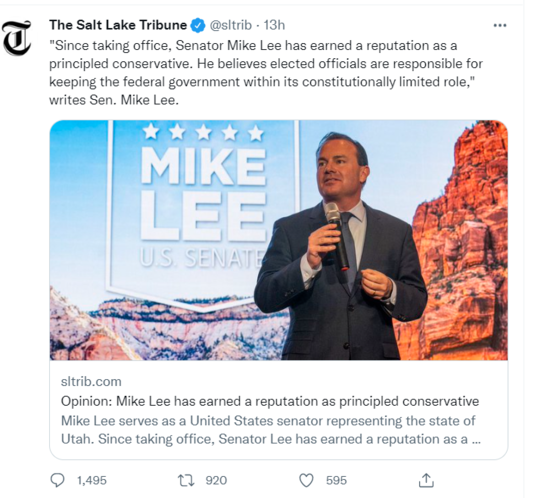 It appears that Lee and McMullin had each been given the chance to make the case for themselves in an op-ed. McMullin did it in the format of the typical politician’s op-ed, writing in the first person and focusing on why he was running and how his experience was relevant to the job.

Lee submitted a stilted biographical sketch of himself in the third person. If knowing what year someone got their undergraduate and law degrees from Brigham Young University is important to Utah voters (which, maybe?), then Lee made the case for himself. He also made sure they know that he “serves on various committees important to Utah.”

It’s basically a version of the biography on his Senate website, only less well written. And also, it’s an op-ed written in the third person! The weirdness was duly noted:

“Political scientist Daniel Drezner wants to know wtf is up with Mike Lee talking about himself in the third person for the *entire* op-ed.” https://t.co/VNYXzLIarZ

Mike Lee wasn’t able to get Mitt Romney to endorse him, but he did score an endorsement from the senior senator from Utah. https://t.co/o1inMdYA4B

Still gonna be hard for Mike Lee to lose. But this weird oped does jibe with Lee’s biggest vulnerability: that he’s a sniveling toady that no one likes. Sort of of a piece with publicly begging mitt to endorse him and getting negged.

Again, the response from the Tribune was to remove the byline. It would be interesting to learn exactly how all this went down, but as of now, the newspaper does not appear to be planning to inform readers about it.

As some of those tweets point out, Lee’s most recent foray into the headlines was when he used a Tucker Carlson appearance to publicly beg Sen. Mitt Romney to endorse him, despite Romney having made clear he would not be endorsing in the race. Lee is definitely nervous about this race, and if the main way he’s getting his name out there involves looking like a buffoon (and not in an intentional, Trumpian kind of way), it’s probably not helpful.

Lee and McMullin will debate on Monday night.