Jan. 6 committee votes to subpoena the ‘center’ of the insurrection: Donald Trump

Given Trump’s long and very public history of avoiding accountability, it is unlikely he will comply with the demand. He roundly mocked the committee online after the vote was held.

“Why didn’t the Unselect Committee ask me to testify months ago? Why did they wait until the very end, the final moments of their last meeting?” Trump opined on his disinformation-laden social media platform, Truth Social.

According to anonymous sourcing at The New York Times, Trump has told aides recently that he would testify only if he was able to do so live. The Times reported Thursday that it was unclear whether the committee would take him up on the offer. It seems such a prospect would be better for the committee and far riskier for Trump since he is already under multiple criminal and civil investigations. His testimony would require him to perform a delicate balancing act to avoid implicating himself. He would also need to avoid perjuring himself.

Whether Trump chooses to comply with the subpoena or not, the vote sets in motion new quagmires for Trump to contend with. It will also force his most staunch Republican allies in Congress to spend the midterms facing yet more questions about his conduct from voters and the press.

The territory the committee has entered now is remarkable and unusual, though not unprecedented in American history.

Former President Richard Nixon was the first president to receive a subpoena. Long before that, President John Quincy Adams and President John Tyler were subpoenaed. Tyler complied and Adams filed a written deposition, according to a report on congressional contempt power and the body’s history of enforcement of subpoenas.

In 1953, President Harry Truman, was subpoenaed by Congress but defied the request from the Committee on Un-American Activities. He rebuffed the subpoena, he said, because of his immunity as president.

“In spite of my personal willingness to cooperate with your committee, I feel constrained by my duty to the people of the United States to decline to comply with the subpoena,” Truman said.

But Trump is a former president. And how this may affect the outcome of his likely refusal weighs hugely here.

Any refusal to comply could trigger a contempt vote by Congress and a referral to the Justice Department. As a prolifically litigious man, Trump could drag out the process in court as he hopes for a Republican takeover of the House and/or Senate.

While this newest legal saga for the twice-impeached former president unfolds, the committee has laid out other startling new evidence about the Capitol attack.

Trump’s intent was mapped out by the panel on Thursday. Emails provided by the National Archives to the committee showed Trump’s plans to declare victory even before Election Day took place.

The plot to overturn the results was “premeditated,” the committee said.

The panel displayed an email from conservative activist and unofficial adviser to Trump, Tom Fitton, where Fitton gave Trump aides Molly Michael and Dan Scavino a prepared statement for Trump declaring his victory. This was sent on Oct. 31, 2021.

“The Fitton Memo specifically indicates a plan that only the votes counted by the Election Day deadline—and there is no Election Day deadline—would matter. Everyone knew the ballot counting would lawfully continue past Election Day. Claiming that the counting on election night must stop before millions of votes would stop was, as we now know, a key part of Trump’s pre-meditated plan,” committee member Rep. Zoe Lofgren said.

On the evening of Nov. 3—Election Day—Fitton sent another email to Molly Michael. He spoke to Trump about the draft he wrote. he said.

“Sending along again, Just talked to him about the draft below,” Fitton wrote.

Again this plan to declare victory was in place before any of the results had been determined, Lofgren underlined.

Further, Trump’s former campaign manager Brad Parscale told the committee that Trump had planned to say he won the election, even if he lost, by July 2020.

Some of the new information has prompted the committee to say that it will recall some witnesses for interviews.

One of those witnesses may be Jason Miller, Trump’s onetime communications adviser. Less than a week before the Capitol assault, Miller emailed Trump’s chief of staff Mark Meadows.

“I got the base FIRED UP,” Miller wrote. [Emphasis original]

He included a link to TheDonald.win, a now-defunct webpage where thousands of threatening and violent messages were posted about the joint session of Congress on Jan. 6.

In a comment on the site highlighted during the hearing, a user wrote: “Gallows don’t require electricity.”

Lawmakers could leave the Capitol in one of two ways, another commenter wrote.

“1. In a body bag. 2. After rightfully certifying Trump the winner,” a post read.

In a clip of his recorded interview with the committee, Miller said he didn’t know there was a wave of violent comments inundating social media.

In a similar vein, committee member and U.S. Rep. Adam Schiff also raised questions about the integrity of some of the Secret Service witness testimony it has received.

The FBI, U.S. Capitol Police, Metropolitan Police, and other agencies had gathered intelligence that violence was possible on Jan. 6, Schiff said.

On Jan. 4, the agency received an intelligence summary about “calls to occupy federal buildings” and “intimidating Congress and invading the Capitol building.”

On a call with Trump’s national security staff in Jan. 2021, David Norquist warned that the Capitol would be the target of an attack. Gen. Mark Milley told the committee that Norquist actually told him specifically that the greatest threat ahead was an assault on the U.S. Capitol.

Another alert was sent to the Secret Service on Dec. 24, 2020. In an email, the alert picked out statements churned up in the chatter being monitored.

The agency highlighted several statements, including one that read: “The protesters should start marching into the chambers… make sure they know who to fear.”

A Secret Service field office also shared a tip among other members of the agency that was first received by the FBI.

On Dec. 26, 2020, the source said: “They think that they will have a large enough group to march into DC armed and will outnumber the police so they can’t be stopped.”

“Their plan is to literally kill people. Please please take this tip seriously and investigate further,” the tipster wrote. “The Secret Service had advanced information more than 10 days beforehand regarding the Proud Boys planning for Jan. 6,” Schiff said. “We now know that the Proud Boys and others led an assault on the Capitol building.”

Several members of the Proud Boys, including leader Henry “Enrique” Tarrio, have been charged with seditious conspiracy and now await trial. 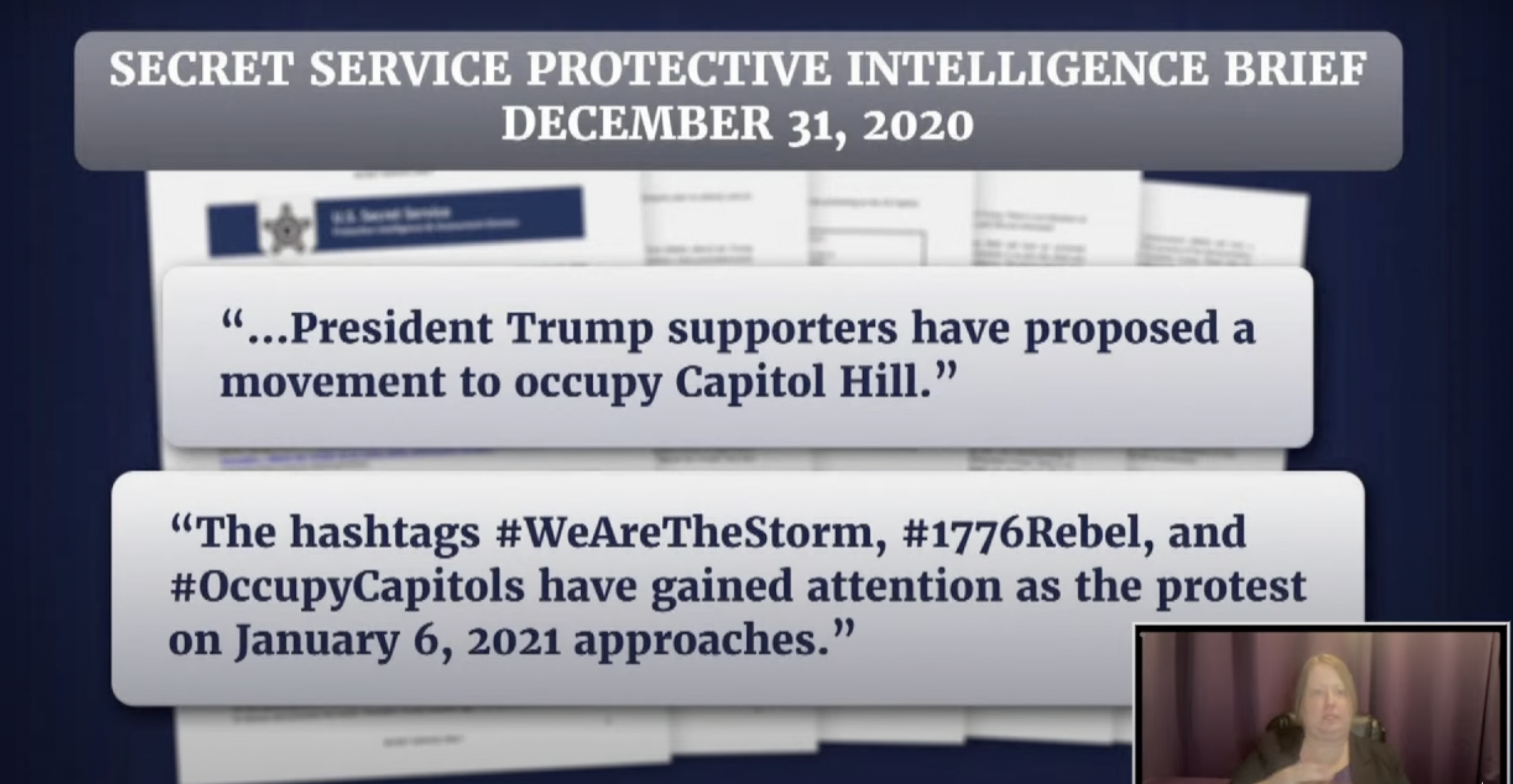 The Secret Service had also received information about “quick reaction forces” being established around the Capitol. In the ongoing seditious conspiracy trial of Oath Keepers Elmer Stewart Rhodes and four members of the group, the quick reaction force has been described by prosecutors as an integral part of the extremist group’s alleged plot to forcibly stop the transfer of power on Jan. 6.

On Jan. 6, a Secret Service intelligence report from early that morning noted the large number of people wearing tactical gear or carrying weapons.

At 12:30 PM ET, an agent wrote: ‘With so many weapons found so far, you wonder how many are unknown. Could be sporty after dark.”

When that message was sent, Trump was halfway through his speech at the Ellipse. Within the next 30 minutes, the first barriers would be breached.

Secret Service agent msg from Jan 6 around 12:30PM ET is shown:
“With so many weapons found so far, you wonder how many are unknown. Could be sporty after dark”

Select committee member Rep. Jamie Raskin highlighted that by 1:19 PM, an emergency operations center alert had gone up and Trump was notified almost immediately that more than 100 people had stormed through barricades at the back of the Capitol.

There were questions raised anew as well around Trump’s alleged fit of rage on Jan. 6 when he was told by his Secret Service detail that he would not be driven up to the Capitol to join the throngs of his supporters.

Meadows’s aide Cassidy Hutchinson said this summer that Tony Ornato, an agent-turned-White House staffer, recounted the temper tantrum to her and recalled how Trump tried to lunge at the neck of his driver, Bobby Engel.

Ornato and Engel reportedly hotly disputed Hutchinson’s testimony and it was reported at the time that they vowed to tell their accounts of that day under oath. Those proclamations quickly fizzled out, however and they never came to the committee to testify.

The committee showed portions of an interview with an unnamed White House employee on Thursday that appeared to corroborate Hutchinson’s testimony. Rep. Pete Aguilar, who also sits on the panel, said investigators are now reviewing whether there was an attempt to obstruct this testimony to the probe.

Aguilar says the cmte is reviewing testimony that suggests there was potential obstruction surrounding this testimony about Trump’s temper tantrum when told he couldn’t be taken to Cap. Aguilar says advice was given: Do NOT to tell the cmte about this topic

In other footage from White House and campaign aide depositions, it was made clear that Trump knew he lost the election but patently refused to accept it.

The prospect mortified him, according to testimony from Alyssa Farah.

“Can you believe I lost to this f-ing guy?” Farah recalled Trump saying.

Trump’s refusal to act on Jan. 6 while the rioting was exploding all around the Capitol speaks hugely to his real intent, the committee says.

The intensity of Trump’s decision to passively watch his supporters mob the nation’s seat of democracy was evidenced in new video footage of lawmakers from Jan. 6.

Video footage of Speaker of the House Nancy Pelosi in a secure location in the Capitol during the attack was jarring to behold.

As she insisted that Congress must return to complete the certification of the election, she was told that lawmakers still trapped on the floor and surrounded by rioters were being told to wear gas masks.

Turning to Rep. James Clyburn, Pelosi said: “Do you believe this?”