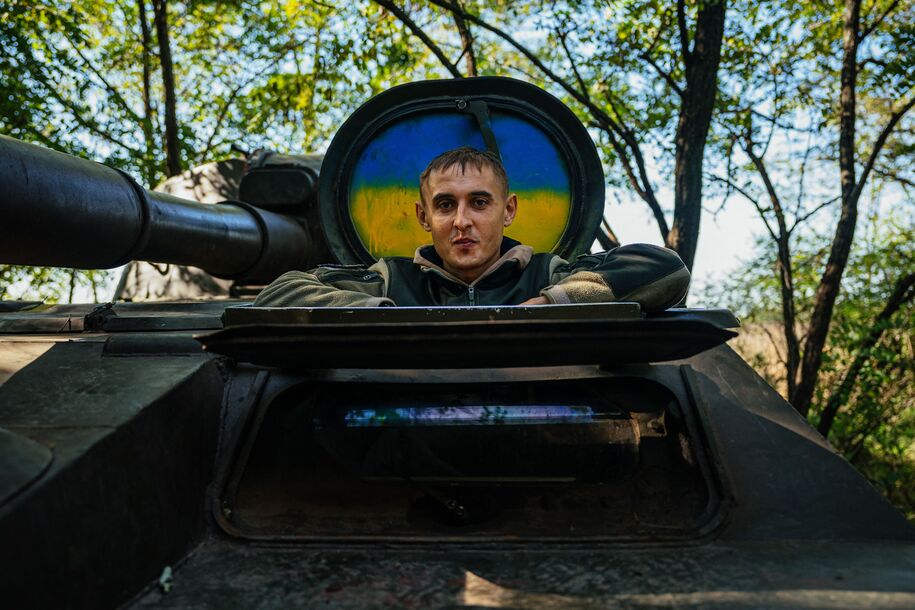 A Ukrainian gunner sits in his 2S1 Gvozdika on the front line in Southern Ukraine. October 8, 2022.

Russian sources on Telegram are reporting that Russian Defense Minister Sergei Shoigu and Army Chief of the General Staff Valery Gerasimov have both been removed from their roles. According to the channel for the Wagner mercenary group, this is directly related to the explosion which heavily damaged the Kerch Bridge connecting the Crimea Oblast in Ukraine with Russia.

This may or may not be true. However, just the fact that Russia’s military leadership is publicly squabbling over leadership and who is to blame for the failures in Ukraine demonstrates just how on edge everyone in Moscow is this weekend.

Though a number of candidates for replacement have been discussed, it’s not clear just who is in charge of the Russian army at this moment if Shoigu is actually out. Just hours ago, Shoigu officially named Gen. Sergei Surovikin as the new overall commander of Russian forces in Ukraine. It’s unclear if this selection will hold in the face of Shoigu’s removal. These reported actions follow other reports from Moscow on Saturday that units of the Russian Federation Guards were stopping traffic and making “multiple arrests, detainments and blockings of military.” Then others reported this wasn’t happening. Then others said it really was.

It’s all gloriously unclear. The fog of war on the battlefield is one thing, but this is the fug of failure spreading out across all of Russia’s military leadership and triggering a life or death game of musical chairs. What’s not to like?

This would seem to suggest that, in addition to blowing up the bridge, the explosion — however it was done — is being felt within the walls of the Kremlin. Shoigu has long been a close confidant of Vladimir Putin, and has held multiple roles in Putin’s regime. Despite being three years younger than Putin, reports have indicated that Shoigu was reportedly to be “retired” this fall. The bridge bombing appears to have accelerated the time table, and to have made this whole thing less “here’s your gold watch, have fun on the yacht” and more “come over here and take a good look at this window.”

While reports continue to paint this as an acceleration of already planned personnel changes, and the whole thing may prove to itself be propaganda (These are Russian sources talking about Russian politics, the odds that someone is wrong or lying seems close to 100%). However, assuming this is true, it seems to represent a new level of chaos for a military whose recent mobilization blunders have only served to underscore the failures of the last seven months. 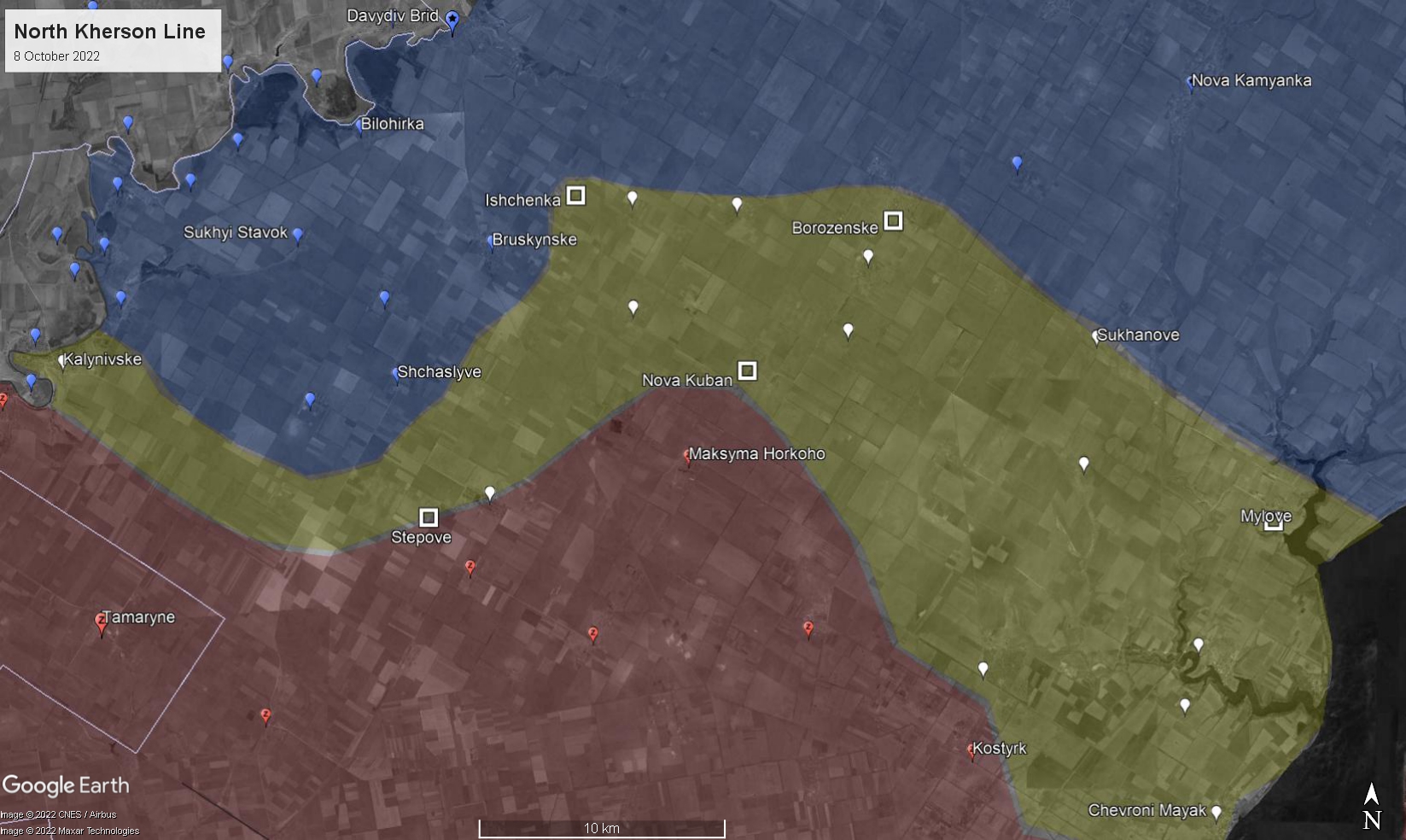 For the last three days, fighting in northern Kherson has been mostly confined to a zone along a line that was Russia’s fallback to their fallback. The northwest end of that line is bolstered by a series of towns that were originally part of Russia’s second line, and were further fortified after Ukraine established a bridgehead across the Inhulets River.

Over the last two days, the reports of Ukrainian forces being present and of active fighting underway have ranged across an area 10 to 20km wide, but most indications are that the hard fighting is still happening up along the line from Bruskynske to Borozenske to Mylove. Russia has a lot of forces in Kherson, and right now a lot of them are crowded into this area. There’s very little cover for either side, and almost no topography to speak of.

Not only is Ukraine probing for weaknesses, but Russia is doing the same. Russian forces reportedly struck out from Ishchenka toward Davydiv Brid on Friday, apparently to surprise Ukraine as they tried to work around to the south. It doesn’t seem to have worked.

On Saturday, it seems clear that Ukraine has extended their control to the south and opened that original pocket to include Shchaslyve. But there don’t seem to be current reports of fighting at either Stepove or Kalynivske, so Ukraine may not be pushing in this direction right now.

Instead, Saturday has brought multiple reports that Ukraine has liberated Bruskynske. This information was very confidently delivered when it was first stated on Telegram. However, it’s been 12 hours since those first statements and there is no confirmation from reliable sources. In their own official announcements today, Russia claimed to have repelled all attacks on Ishchenka,  Sadok, and Bezymennoye, but did not mention Bruskynske. Which could be kind of a backdoor admission.

This town could slip back into the yellow, but for the moment it seems a fair bet that Ukraine has control.

Moving to the north, there has been movement in several places along the line, though everything looks pretty much the same around Kreminna and along that route to Svatove. 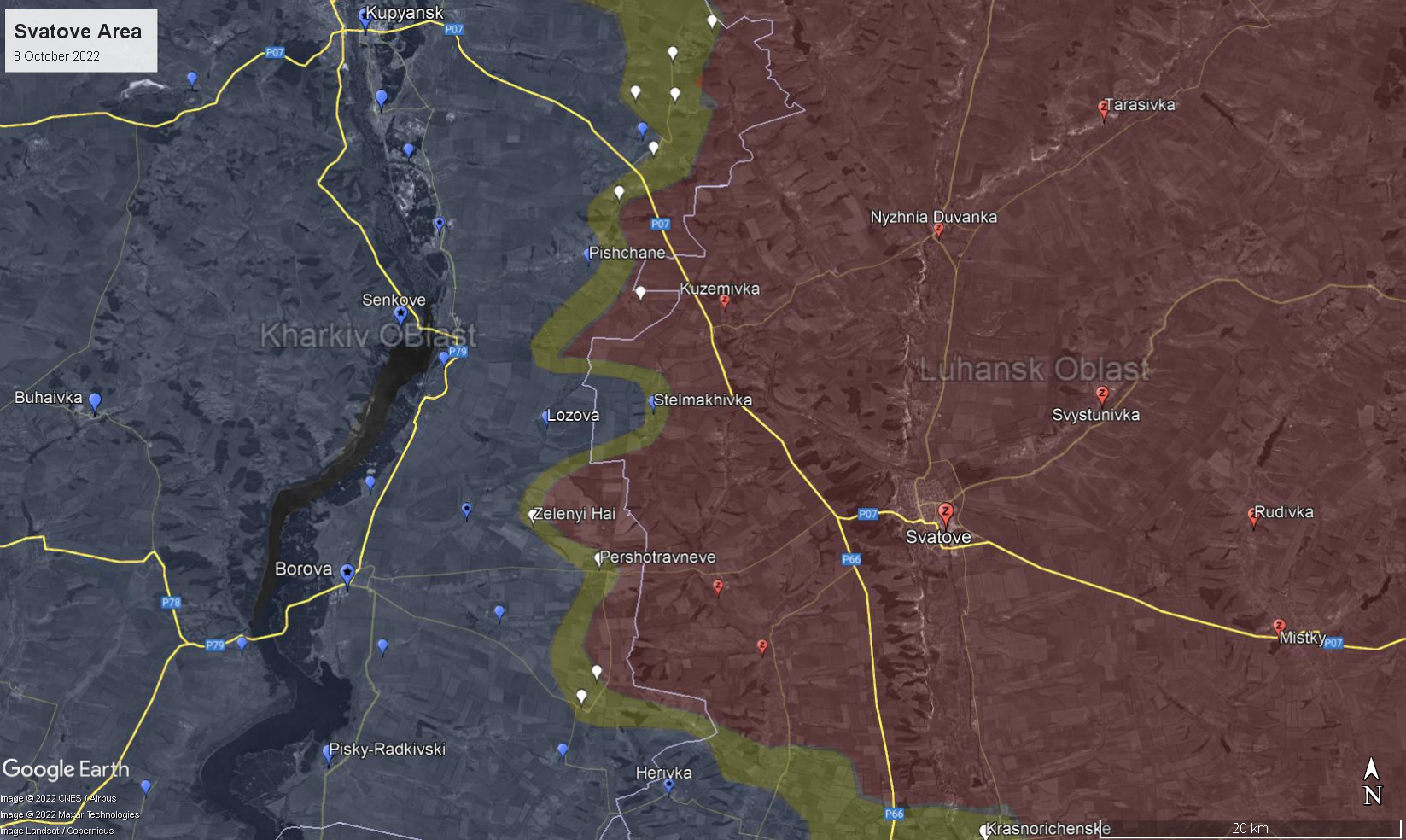 The change is directly to the west of Svatove, where it seems that Ukrainan forces have liberated the towns of Lozove and Stelmakhivka. This map is likely a little conservative, because they’ve probably liberated Zelenyi Hai, as well. This represents not just another location where Ukraine is pushing closer to Svatove, but another point at which they have driving Russia completely across the line from Kharkiv Oblast into Luhansk. At 20km from Svakove, Stelmakhivka is probably the closest point between Ukrainian forces and the Russian transport hub.

Another theory on what brought the bridge down. In this theory, ATACMS punched right through the road deck before exploding.

We got our first photo from under the bridge, where I said earlier that we will find the answer:

1) boat – no.
2) truck – very unlucky driver, but very advantageous for Ukraine and russia, as it allows both to deny the use of
3) ATACMS, which punched that hole in the bridge
1/2 https://t.co/XTOUg9TYnL pic.twitter.com/DfQhFPEcch

I still think boat is a likely answer. Because while I don’t think truck bomb fits with the explosion, I think it took a truck load of explosives to do this.

Russia is running this video which supposedly shows a test train heading out to make the trip, slowly, across the Kerch Bridge. However, I still don’t buy it. Not one image of the scene so far has demonstrated that Russia has been able to remove the train which burned. Some of that metal is probably still too hot to touch. That Russia would allow a creeping few cars to cross the wrinkled remaining car lane? Yes. That they can somehow get across the train bridge at this point? No.

At this point it is all about optics and the Russian regime is desperately trying to relay this. It also proves how terrible the situation for Russia has become that they are risking this. We observed the same when Antonovsky bridge was hit, the first time.pic.twitter.com/Oq1cMQvjiT

Honestly, this is a bigger mystery than how the bridge was blown.

It is really interesting how quiet the Kremlin’s reaction to the bombing of the Kerch Bridge has been.

Virtually no accusations towards Ukraine, no threats, no “armageddon” like Medvedev predicted.

Really feels like Russian leadership is trying to sweep this under the rug.