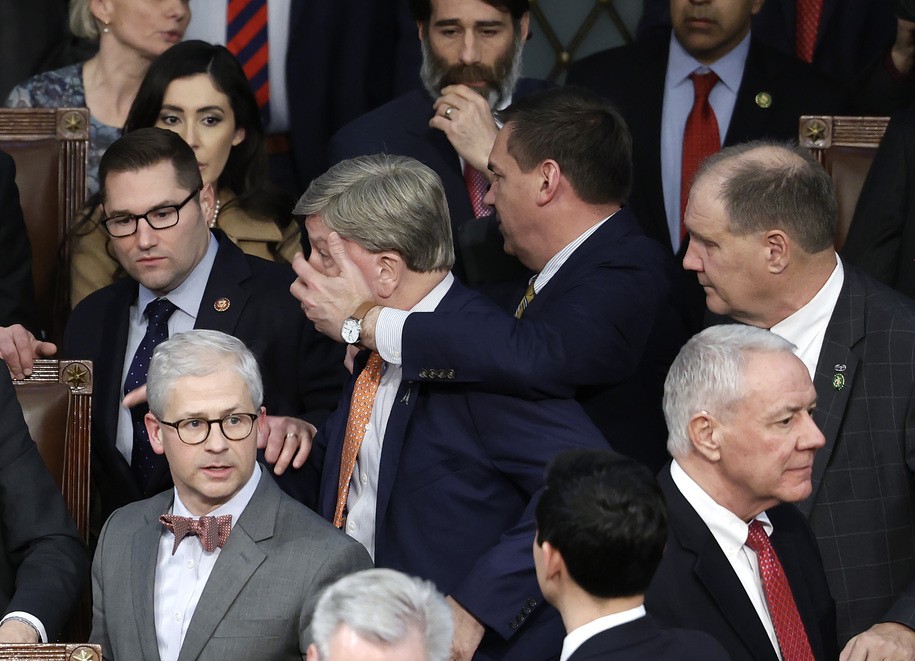 Rep Mike Rogers is dragged away by his face to keep him from diving in to punch Matt Gaetz.

In the fourteenth round of his failure to bribe his way into the speaker’s chair, Kevin McCarthy missed by one vote. Then McCarthy went up to Matt Gaetz and Lauren Boebert and tried to get them to change their votes. Whatever Gaetz said in reply, it snapped McCarthy around as he was walking down the aisle and Rep, Mike Rogers had to be restrained—as in grabbed by the head—to keep him from plunging into the seats to get at Gaetz.

No votes where changed, and a few minutes later the clerk read out the results. McCarthy had missed it by this much.

As Republicans tried to cool down their fight-ready members, they moved to adjourn until Monday. Then they failed on that vote. Then they started cheering because apparently Gaetz gave them some kind of assurance that he would toe the line in the next round of voting. So now we’re going into the 15th round just ten minutes before midnight on Friday night. And if Gaetz screws them again, it will be a surprise to no one. Except maybe Kevin McCarthy. Because that guy? He’s a tool.