Described as a “national abortion ban, which would ban abortions in all 50 states without exceptions for the health of the mother” without mentioning the 15-week restriction, respondents opposed ban by 41 points, 25% support-66% opposed.

But adding Graham’s 15-week qualifier barely moved the needle. Described as a “national abortion ban, which would ban abortions in all 50 states after 15 weeks without exceptions for the health of the mother,” the measure was still 38 points underwater, with 27% support-65% opposed.

Another key finding of the survey was that respondents found the prospect of a national abortion ban even more motivating than the overturning of Roe v. Wade itself. 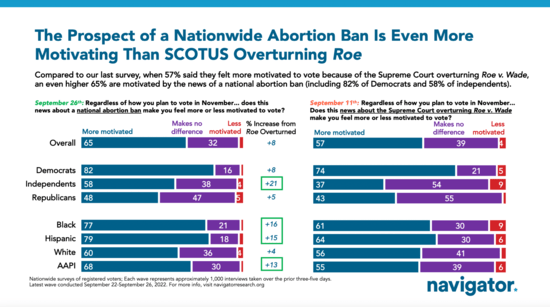 It’s worth remembering here that Graham not only unveiled the bill, he also promised it would get a vote if Republicans took control of Congress.

“If [Republicans] take back the House and the Senate, I can assure you we’ll have a vote on our bill,” Graham pledged at a press conference last month.

Give $5 right now to help kill Republicans’ chances of taking the Senate!

Give $5 right now to help kill Republicans’ chances of taking the House!