No, media, it’s not a ‘strategic pause’ anymore, Russia is just stuck 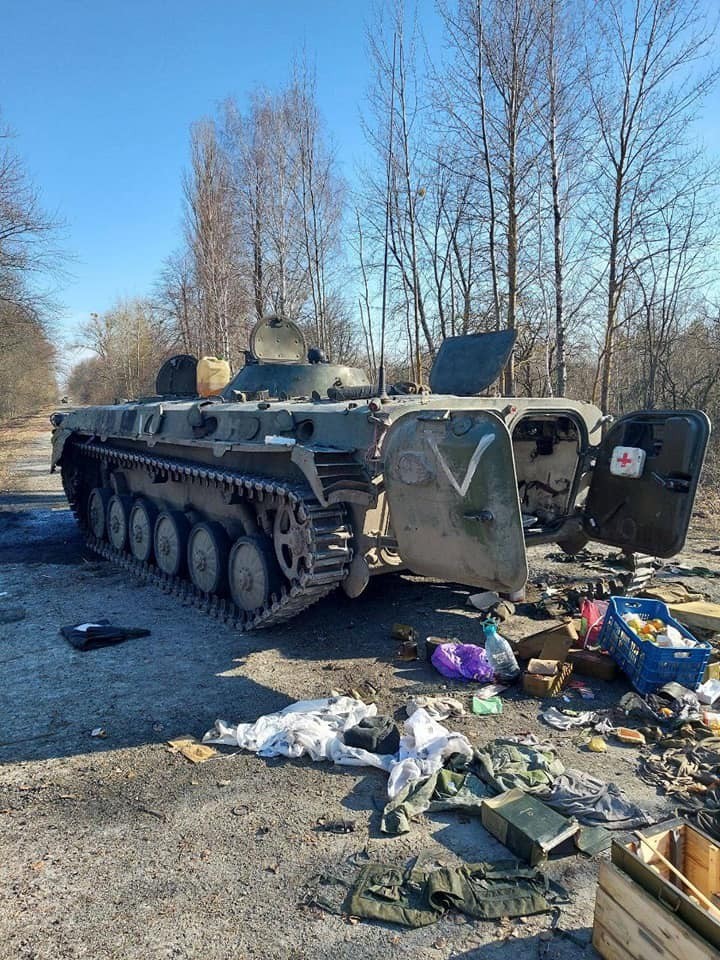 This map shows us the gains by each side in the last seven days. Red are Russian gains, blue are Ukrainian gains. 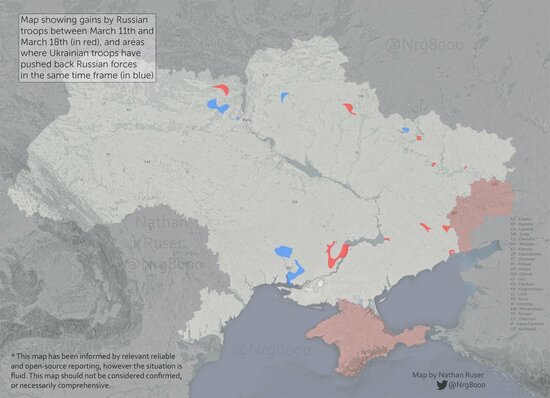 If you’re wondering, yeah, that’s pretty much nothing. Russia consolidated some territory northwest of Kyiv, while Ukraine pushed Russia out of western Kyiv suburbs. There were offensives reported there last few days, and looks like they did good work—important because it pushes Russia outside of artillery range of central Kyiv.

Russia gained a smattering of towns in the northeastern Kharkiv/Sumi axis, as well as the Donbas eastern axes. Down south, Russia occupied some roads on the way up to Kryvyi Rih, but directly west of it, lost all that ground around Mykolayiv as Ukraine’s counter-offensive pushes toward Kherson.

The arrow top-left is the furthest Russia reached before being pushed back down toward Kherson.

The top three axes may be fiercely contested, but not much territory has changed hands. (Interestingly, a Ukrainian hospital in the area said they were getting far fewer casualties from Kharkiv, as more of the fighting had shifted to the eastern Donbas region.) The southern axis, however, is much more dynamic. The arrow on the top-left corner of the map is where Russian forces were three days ago. They’ve now been pushed down to just 20 kilometers or so from Kherson. I wondered yesterday how Russia would react, and now we have some clues.

Their southern axis, already under-resourced, was split into three prongs. There’s the effort to get to Odesa on the lower left of this map, which required either going through Mykolaiv, or finding another crossing of the Southern Bug river further north (where they got spanked). The middle prong headed up to Kyrvyi Rih, through hundreds of miles of hostile territory swarming with territorial defense forces, to try and take a city of 634,000. And a prong heading east to assist in the siege of Mariupol. So what does Russia do? Here’s that clue:

#Ukraine: It is alleged that a Russian convoy attempting to leave Mykolaiv for Kherson fell into an ambush near #Snigurovka, and crashed their vehicles, leaving behind a BM-21 Grad pattern MRL and a supply truck. As can be seen, a TDF fighter is inspecting the aftermath. pic.twitter.com/IjIJE7KCpC

The Ukrainian spelling of that town is Snihurivka, and it’s on the road from Kherson up to Kryvyi Rih. If it’s true that it was rushing back to Kherson, it suggests that Russia may have given up on that nonsensical middle prong and is getting its artillery (and likely other resources) back south to defend Kherson. And you can certainly see why it’s so important.

Liberating Kherson would offer Ukraine a propaganda victory if immeasurable worth. The press is still afraid to question whether Russia is losing. That’s why we see headline after headline about Russia “pausing” and “resupplying” and “regrouping” and “reinforcing” and the like, instead of the more accurate “stuck in the mud.” Losing its biggest prize, Russia’s dire straits would be harder to hide. Meanwhile, the Ukrainian people would see tangible proof that the tide of the war was turning. Now take a look at the map again:

There are two main highways coming up from Russian-occupied Crimea. Strategically, liberate Kherson and you strand those Russian forces reaching for Kryvyi Rih and secure that southern approach toward Odesa and up to Kyiv. Manage a push toward Melitopol, and Russia’s troops in the southeast are in real trouble. Sure, they can still be supplied through Donbas in the east, but Russian logistic lines are already fragile enough. The last thing Russia needs is to break off units besieging Mariupol to reinforce their western flank.

We now know that the troops marching on Kherson came from Odesa. The city is secure, and a potential 1,500 Russian marines hanging out offshore isn’t enough to really threaten a city of over 1 million. There are many similar towns out west that are suddenly safe given Russia’s woes in the east, and their defenders can now be committed to the war. How many? No clue. Ukraine is certainly not saying. But it’s no coincidence that so much video the last two days has been of Ukrainian artillery barrages, as opposed to the infantry ambushes that dominated the first two weeks. (For example here, here, here, and my write up here.) The West (capital “W”) hasn’t announced any artillery shipments to Ukraine. This is all local stuff, finally deployed in battle.

The other factor at play—if Ukraine retakes Kherson and Melitopol, we’re almost back to the pre-war borders, and Russia might be interested in suing for peace, taking Donbas and Crimea for themselves as a consolation prize, something for Vladimir Putin to sell to his home crowd as some kind of glorious victory (even if it just gets us back to the pre-war status quo). Ukraine has rejected any peace terms that surrenders any of their territory. But Ukrainian President Volodymyr Zelenskyy will have to weigh any such serious proposal with the rising civilian death toll in his country. I certainly don’t end him that decision.

This was bound to come up:

THREAD 1/10 Judging by the words of Russia’s chief negotiator, Vladimir Medinsky, a second topic has emerged in Russian-Ukrainian peace talks: the issue of sanctions against Russia (and their lifting). This both complicates the issue and the peace process and gives it a chance

Problem for Russia is, Ukraine can’t negotiate away sanctions. Russia has to appease the Western nations imposing them. And while some nations may be more eager to return to the old status quo and return to buying Russian fossil fuels, any continuing sanctions from large players like the US, Japan, and the UK will mean lasting pain for Russia. It needs them ALL gone.

This story, on how Putin has reshaped the world, but not how expected it, is excellent.

But that world – born in those dramatic popular revolutions – came to an end when Putin ordered Russian forces into Ukraine.

The German Chancellor Olaf Scholz called this moment a zeitenwende – a turning point – while UK Foreign Secretary Liz Truss said it was a “paradigm shift”. The age of complacency, she said, was over.

I have learned more from Kamil Galeev than anyone else since this war began.

How to sabotage Russian war efforts?

There are ways to sabotage Russian war capacities by focusing on its three major bottlenecks: demographic, economic & institutional. Let’s start with demography. Russian started this war suffering from the shortage of young draftable males🧵 pic.twitter.com/p8gqhpJZDB

Unbelievable fact I learned from this thread: “From the [Soviet] high school class of 1941 only 3% [of males] were alive by the end of the war.”