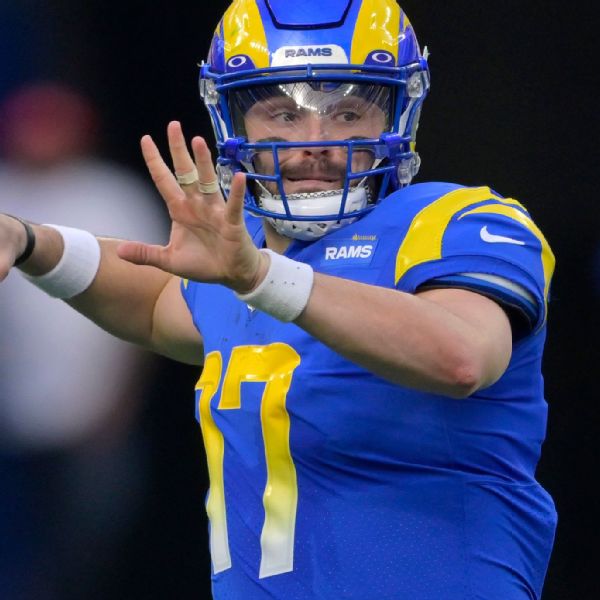 INGLEWOOD, Calif. — After Baker Mayfield’s best performance in his short tenure with the Los Angeles Rams, coach Sean McVay was asked whether the quarterback has been as good as or better than his expectations since Mayfield joined the team on Dec. 6.

“I think probably better,” McVay said. “But you guys know I was always a fan of him, and I think he’s played really well. And you’ve got to think about too what he’s done to come in here and be able to play around a lot of guys too that haven’t been here, and to be able to lead the charge today. Just an incredible effort. … He has been outstanding.”

On Sunday afternoon, Mayfield led the Rams to a 51-14 victory over the Denver Broncos during a game in which Los Angeles didn’t punt. The Rams scored on all but the last of their nine drives, when they took over on downs with six seconds left in the contest and took a knee. It was the second time under McVay that the Rams didn’t punt in a game.

Mayfield was dominant on Sunday, completing 24 of 28 passes for 230 yards and two touchdowns. His completion rate of 85.7% was the second highest in a game in his career. Mayfield also set the Rams’ single-game completion percentage record, passing Kurt Warner (2000) and Case Keenum (2016).

“Coming off the Monday night game and not really playing well on offense, and obviously, I was frustrated with how I played,” Mayfield said. “And for us to play a complete game like that, that speaks volumes.”

Mayfield heavily relied on his tight ends against the Broncos, including Tyler Higbee, who had nine catches for 94 yards and two touchdowns. Mayfield has thrown 39 touchdown passes to tight ends since entering the NFL, which is tied for the second most in that span.

“The guy’s a competitor,” Higbee said. “He’s a good quarterback. He belongs in this league, and he proved that today.”

The 51 points by the Rams were the most they scored since beating the Kansas City Chiefs 54-51 on Monday Night Football in 2018. The Rams’ previous season-high scoring total was 31 points, which came in a Week 2 victory over the Atlanta Falcons. Los Angeles entered the day with the second-worst scoring average in the NFL at 16.4 points per game.

According to Elias Sports Bureau research, the Rams are only the fourth team since 1950 to score 50 points after entering that game averaging under 17 points (minimum of 10 games played prior to scoring 50).

The victory over the Broncos was the Rams’ third game scoring at least 50 points since McVay was hired as head coach in 2017. That is tied for the most such instances in that span.

“He’s been great,” McVay said of Mayfield. “And I just think he sees the field really well. … For such a fiery competitor, he’s got a nice, even-keel demeanor in between series. He sees things really well. He is able to have great communication, and today, things were really fluid and smooth. And to not have to punt at all against an outfit like that was a big-time accomplishment for Baker and the offense.”

The ESPN Stats & Information Group contributed to this report.