Pass the smelling salts! The Tankies lost it over Zelenskyy’s Washington visit

If you’re on the side of the US empire on any issue you are on the wrong side. Doesn’t mean the other side is always necessarily in the right, it just means a globe-spanning empire that’s held together by lies, murder and tyranny will always be in the wrong. Yes it’s that simple.

The name “tankie” comes from those Western leftists who continued to defend the Soviet Union after it violently crushed rebellions in Prague and Budapest with tanks. Despite all evidence to the contrary, they refused to surrender their beliefs in a Soviet socialist utopia.

In the case of Ukraine, the tankies claim it’s the United States’ fault that Russia invaded, goaded into attacking because of their nefarious capture of the Ukrainian government, potentially expanding the NATO alliance to the Russian border.

They all pretended that NATO didn’t already share a border with Russia, and everyone shrugged off Finland and Sweden’s NATO bids, weirdly unthreatened by NATO’s new presence on 1,340 additional kilometers of Russian border. Its almost as If NATO wasn’t actually a threat to Russia!

It didn’t even matter to the tankies that Putin himself has time and time again reiterated his grand imperialist ambitions, while Russian politicians and state propaganda claim that Warsaw and Berlin come next after Ukraine. It also doesn’t matter that a belligerent Russia has invaded several of its neighbors over the past decades. If you are a tankie, it’s all America’s fault, the end.

As you might imagine, they didn’t take Volodymyr Zelenskyy’s visit to the United States on Dec. 21 very well.

Caught up w/ the Ukrainian diaspora delegation on their way into the Capitol to cheer for Zelensky
They told me $45 billion wasn’t enough, neo-Nazis do not exist in Ukraine and the banning of the Russian wing of the Orthodox Church & oppo parties was justified bc “martial law” pic.twitter.com/pFE2wmWaH9

The Russian Orthodox Church is literally an arm of the Russian government, and was used in Ukraine to foment division, rebellion, and espionage. Ukraine has plenty of other Orthodox churches for people to attend in this deeply observant Orthodox nation, as well as Catholic and Jewish venues. But tankies like Max Blumenthal will hyperventilate about Ukraine removing pro-Russian elements from its territory, while ignoring Russia’s war crimes, murder, and destruction. And they manifest that callousness by harassing Ukrainian refugees fighting for their country’s survival. 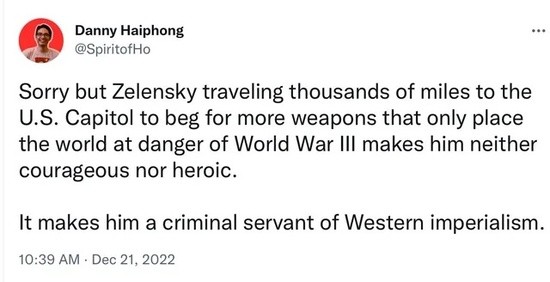 If only Ukraine would surrender to the murderous hordes, then a bloodied Russia wouldn’t have to resort to making nuclear threats! Ergo, something something imperialism. All the while, Vladimir Putin is comparing himself to the literal imperialist Peter the Great. 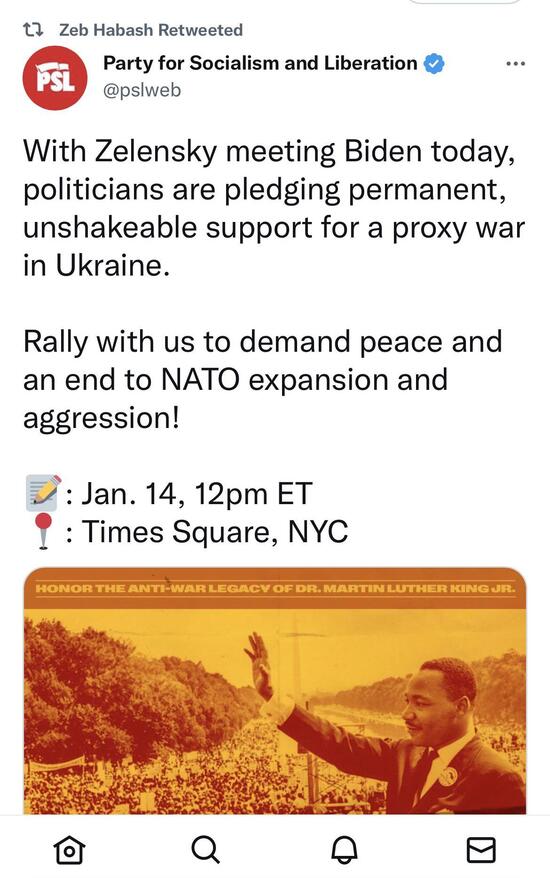 For all the talk of “NATO aggression,” how come NATO hasn’t invaded any of its neighbors? There’s a reason nations—including several historically neutral ones—are clamoring to enter NATO, and it isn’t because of Russia’s friendly neighborly behavior.

Noam Chomsky, in an interview this week, says “fortunately” there is “one Western statesman of stature” who is pushing for a diplomatic solution to the war in Ukraine rather than looking for ways to fuel and prolong it.

Let’s see what he’s up to these days … oh look at that, he continues to debase himself.

If the war goes on, Ukraine will be the primary victim. Advanced U.S. weapons may sustain a battlefield stalemate as Russia pours in more troops and equipment, but how much can Ukrainian society tolerate now that Russia, after many months, has turned to the U.S.-U.K. style of war, directly attacking infrastructure, energy, communications, anything that allows the society to function?

I don’t recall seeing any Iraq of Afghan city looking like Mariupol, Aleppo, or Grozny.

Open your eyes! Russia has destroyed the cities of Aleppo, Homs, Grozny and Mariupol, causing many civilian casualties. Destroying cities is Russia’s specialty. That is disproportionate to the actions of Ukraine. Russia has started the war against a sovereign country. pic.twitter.com/BgiscHtu7H

And I certainly don’t recall U.S. forces systematically destroying civilian water, electrical, and heating infrastructure. I’m certainly no apologist for American imperialism, and this site rose in prominence thanks to our opposition to the U.S. invasions and occupations of Iraq and Afghanistan. But American forces haven’t engaged in that kind of wanton mass destruction in generations.

And what’s with his claim that it took Russia “many months” before destroying civilian infrastructure, somehow pretending that entire cities haven’t been leveled by Russian bombs since the start of the war. 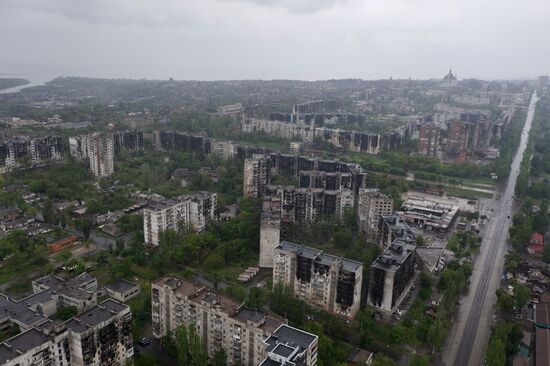 Finally, NOAM CHOMSKY THE SAVIOR deems to dictate to the Ukrainian people what they can or should tolerate. He feigns concerns about their lack of electricity and heating, but nothing about their concerns of their countrymates getting murdered, raped, tortured, and subjugated in occupied territories. It’s not for him to decide how much Ukrainian society can tolerate. Ukrainians can decide for themselves. And it is clear that Zelenskyy has a popular mandate to remove Russian forces from all occupied territories.

OMG that guy! He was banned from here at Daily Kos for something or other; we probably weren’t left enough. Now he’s literally a Russian government mouthpiece. You’d think being so breathtakingly wrong about Russia’s invasion would humble him, but nah, being a tankie is like being a Trump Republican—you can pretend you’re never wrong.

His Twitter bio says he hates “globalist fascism,” he tweets random crazy shit like, “Ukraine is used by the zionist oligarch mafia for human trafficking,” and … this:

Based on the facts and evidence available to everyone who wants to look into it, and because I believe in the principles of liberty and the rule of law the USA was founded on, I once again say, I proudly stand with Russia.🇷🇺💪 pic.twitter.com/hDjGWGOMDS 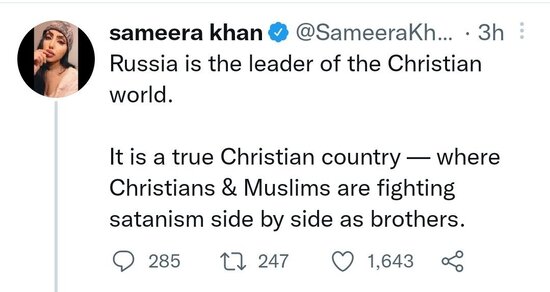 Let’s check in on the dumbest tankie of them all:

This contains convincing evidence of deliberate civilian killings by a Russian paratrooper unit in March. Unfortunately such killings tend to be a common feature of war, which raises the question of why you’d want to prolong the war, rather than curtail ithttps://t.co/ezEku36XQa

Tracey has been a blithering fool this entire war, recently claiming that the Holocaust was America’s fault. That was some A+ tankie revisionism in action.

This latest might not be as dramatically ridiculous as his Holocaust take, but it’ll certainly make his greatest hits catalogue: “Alright, I’ll admit it, Russia committed atrocities in occupied territory, a totally common thing. So why would Ukraine want to liberate the rest of Russian-occupied territories?” Sometimes he seems so close to getting it. Yeah, Michael, why would Ukraine want to protect its people from such atrocities?

But nope, his brain shuts off and he’s left with a useless “durr war is bad” conclusion.

Meanwhile, his chief benefactor Glenn Greenwald is back on Tucker Carlson’s show.

Glenn: “So the entire question that needs to be asked is: who is this really benefitting? And the answer is everyone except the American people.” pic.twitter.com/hiqbVqBybP

It’s laughable to see any Republican cry about spending not “benefiting the American people” when they vote against literally any program that does so. But in this case, this argument is particularly wrong. I support Ukraine because it’s the right thing to do, for freedom and democracy. But if you want a cold, calculating, heartless view of that spending, it’s incredibly beneficial to us. As summarized in that Center for European Policy Analysis think tank report:

Some of this stuff is good, some of it is not. The hell I want more domestic natural gas production. We need to get off that shit. And I don’t love the military industrial complex’s business boom. But there’s no doubt that the money spent in Ukraine benefits Americans in myriad ways. Greenwald and Carlson are full of crap. 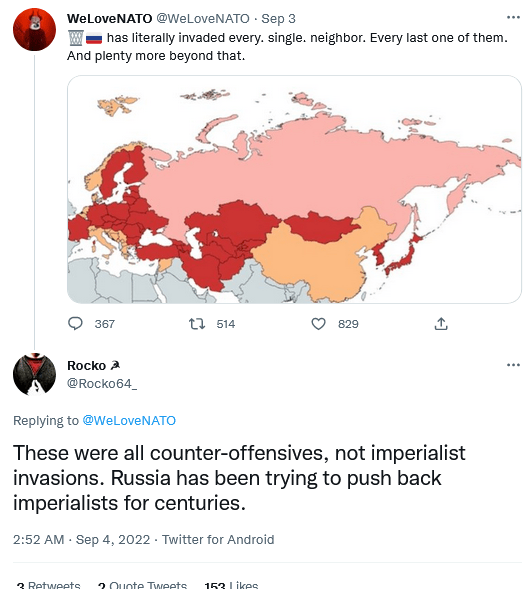 This refusal to call out imperialism wherever it rears its ugly head is so bizarre. What’s funny is I’m sure the tankies would love to call out the United Kingdon’s invasion of Iran in 1941 as imperialism. But hey, it was the Anglo-Soviet invasion of Iran, so sure, the Soviet part of it was a “counter-offensive.” Got it!

What’s particularly frustrating about these rationalizations of Russian aggression is that Russia itself doesn’t hide its imperial ambitions. Here is Putin himself:

“Peter the Great waged the great northern war for 21 years. It would seem that he was at war with Sweden, he took something from them. He did not take anything from them, he returned [what was Russia’s].

“Apparently, it is also our lot to return [what is Russia’s] and strengthen [the country]. And if we proceed from the fact that these basic values form the basis of our existence, we will certainly succeed in solving the tasks that we face.”

Everything is Russia’s! There is nothing that isn’t Russia’s. But don’t dare call it imperialism, even though Putin literally says imperialism “forms the basis” of their existence. Without imperialism, all Russia would have left would be a sad lot of people, wondering why everyone else has toilets and washing machines as they drown themselves in vodka.

BONUS: Libertarians aren’t tankies. But had to include this for fun: 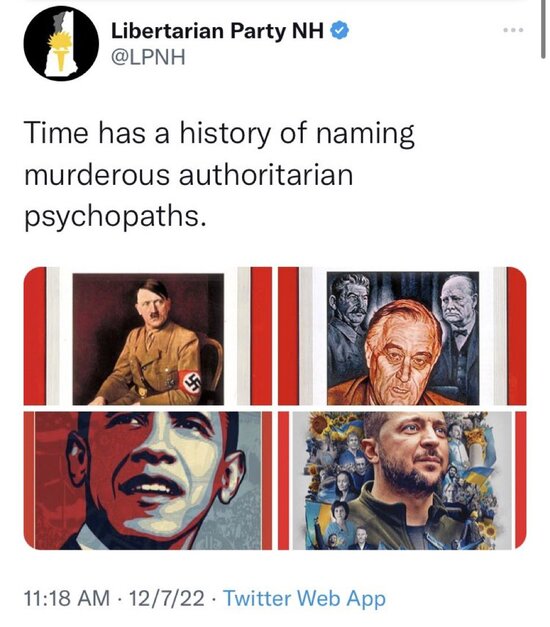