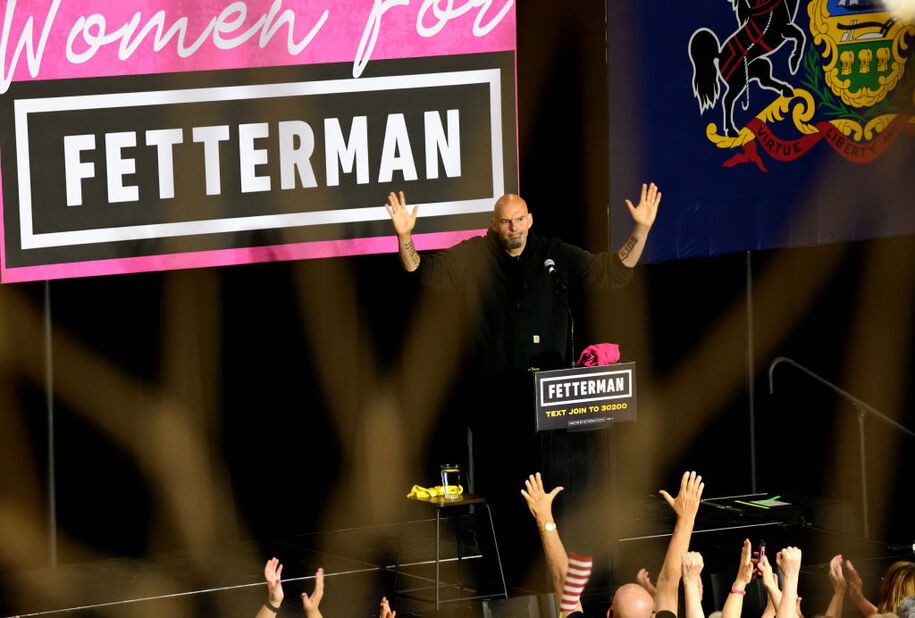 If one looks to polling as a general guide to Election Day, the ‘red wave’ scenario sold to voters as inevitable isn’t exactly panning out. The last round of polls released over the weekend continues to suggest a highly competitive midterm election that will all come down to turnout in the end.

In that regard, Democrats got some good news with the final NBC News poll of the cycle showing Democrats and Republicans locked dead even on enthusiasm at 73%. The finding is a 19-point turnaround from last month when Republicans held a 9-point edge at 78% – 69%. 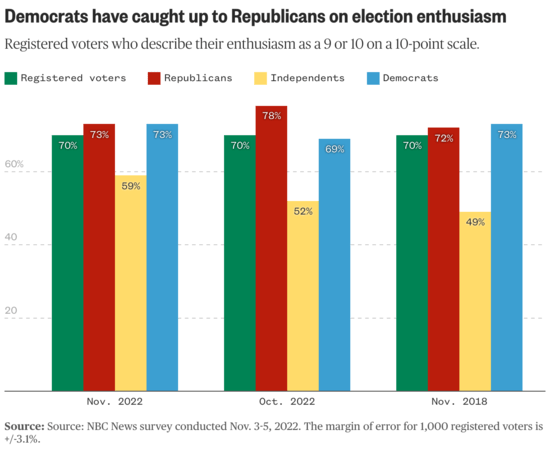 Civiqs tracking of the generic ballot puts Democrats at a 3-point advantage among likely voters, 50% – 47%. Democrats hit 50% in the poll on Sunday for the first time this cycle, a trend that continued into Monday.

The gender gap in the in the ABC/Post poll appears to tell a big story about two big questions: whether the abortion issue is still resonant, and who is prioritizing which issues.

It’s worth noting that women accounted for 52% of voters in 2020 (which is very typical) and 53% of voters in 2018. So it will be interesting to see what the gender makeup of the electorate turns out to be this cycle.

But yeah, abortion still appears to be a very motivating issue, contrary to what many male pundits have claimed.

But it’s not just polling. Early voting numbers in Nevada are giving us our first glimpse of an incredibly close contest for U.S. Senate that isn’t a slam dunk for either party. Nevada’s dean of journalism, Jon Ralston, CEO of the The Nevada Independent, issued his incomparable predictions Sunday based on the state’s early voting returns.

Ralston holds the distinction of predicting in 2010 that then-Senate Majority Leader Harry Reid would win his race long after nearly every other pundit/analyst nationwide had declared Reid toast. So Ralston’s early call for Democratic incumbent Sen. Catherine Cortez Masto (as well GOP gubernatorial nominee Joe Lombardo) is worthy of consideration (Democrats would much rather be his odds-on favorite), but Ralston’s write-up also came with lots of caveats in true nail-biter fashion. Ralston writes:

The early voting numbers don’t indicate a red wave, just the possibility of one if everything breaks right for Republicans. This is not like 2014, when all the early voting data confirmed a red wave – I knew after a couple of days – and it was just a question of how many boats would be lifted by the red tide.

This year, the Democrats have a slight advantage with more mail to come enhancing that edge. The Democrats are in the game — a game they have no right to be in, considering President Biden’s subterranean numbers and sticker shock everywhere Nevadans shop…

The two top of ticket races – U.S. Senate and governor – are very difficult to pick. I would not be surprised by any outcome — both incumbents win, both incumbents lose or a split decision.

As Ralston noted of Nevada, the real question is whether a crush of rural Republicans are really waiting to flood the polls on Election Day or whether Democratic city/suburban dwellers will continue to romp despite the fact that they have already amassed a clear early-vote tally. That dynamic tracks very closely with the national state of play, where Democrats have banked several million more early votes than Republicans, but anything could still happen.

One thing we can be absolutely certain of: The analysts and pundits who issued a tsunami of red-wave predictions this cycle have no clue who will ultimately turn out on Election Day. Don’t take it from me: take it from Cook Political Report handicapper Dave Wasserman.

“We are, in many respects, stumbling through the dark with headlamps and flashlights,” Wasserman told The Daily Beast. “And we have a vague understanding of where these races stand, but there are bound to be surprises.”

Count on surprises, folks, is probably the best advice. Many of the top-tier Senate and gubernatorial races are so tight that they may simply come down to a matter of which state parties and their candidates put together a better Get Out The Vote operation. For now, instead of this looking like a midterm where everything breaks one way at the last second, it could very well be a contest-by-contest election.

Looking for something to do with all that pre-Election Day energy? Democratic campaigns all over the country need your help to get out the vote tomorrow. Mobilize is your one-stop shop to get connected with campaigns anywhere in the country that need volunteers to call, text, and knock on doors. Click here to view and sign up for virtual GOTV opportunities or to find GOTV activities near you!