Republicans flood the zone with pro-GOP polls, bending models in their direction 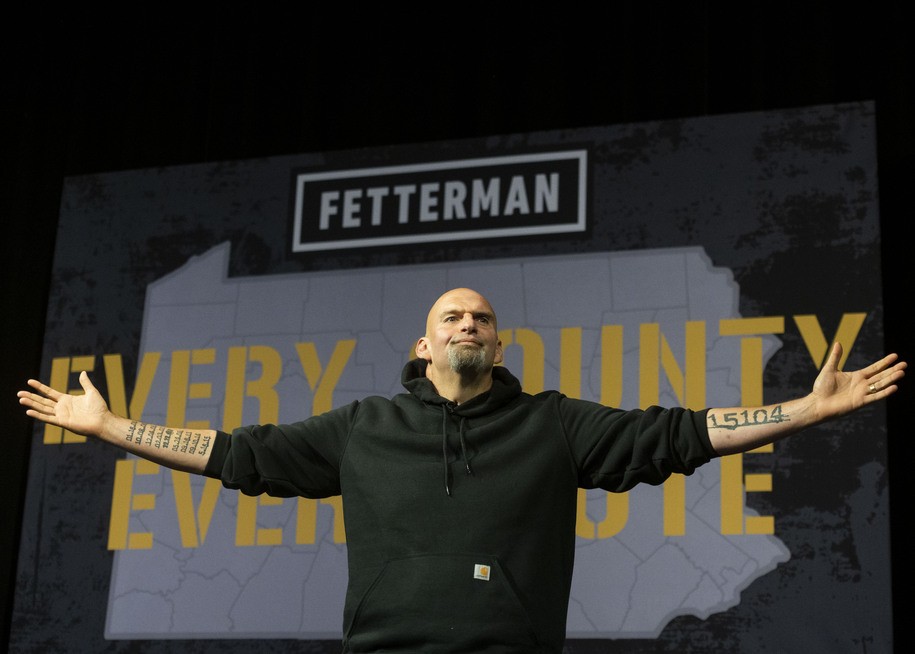 Democratic Senate candidate Lt. Gov. John Fetterman (D-PA) is welcomed on stage during a rally at the Bayfront Convention Center on August 12, 2022 in Erie, Pennsylvania.

As former Trump aide Kellyanne Conway once suggested, if you don’t like the facts, just create alternative facts.

That’s exactly what Republicans and their pollsters are doing in several of this cycle’s most hotly contested races.

Take Georgia, for instance—until about Oct. 21 or 22, Democratic incumbent Sen. Raphael Warnock had been holding a pretty steady 3- to 4-point lead during October over his GOP rival Herschel Walker in FiveThirtyEight’s aggregate. Then the gap suddenly narrowed to about 1 point in the final week of October, Warnock 46.7% – Walker 45.4%. 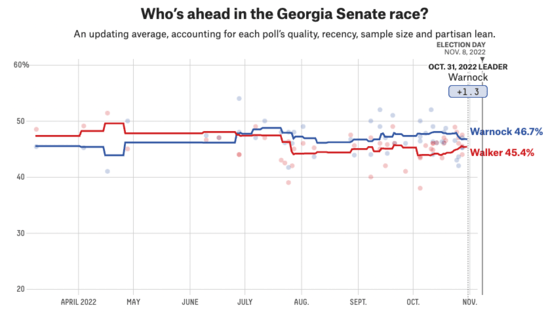 What exactly happened to nudge Walker into contention to take the lead? A whole bunch of GOP-slanted polls, that’s what.

Of the seven aggregate polls taken since Oct. 21, five of them were conducted by either GOP-aligned groups or pollsters that use friendly GOP modeling: Trafalgar Group, Rasmussen Reports, Moore Information (Walker poll), co/efficient, and InsiderAdvantage. All of them put Walker in the lead by anywhere from 2 to 5 points.

The two other polls—one conducted by The New York Times/Siena College and the other for the Atlanta-Journal Constitution—found that Warnock had a 3-point advantage and the two candidates were tied, respectively.

Perhaps the most deceptive polling outfit is InsiderAdvantage, which polls for Fox affiliates across the country, giving the surveys the veneer of being even-handed media-sponsored polls. But a quick google search of the pollster finds their handiwork generating GOP-friendly headlines in several of the key contests they have polled:

Wow, Republican prospects are really improving across the board. Amazing.

The red mirage, as it were, is also evident in Pennsylvania’s Senate race: 3 of the 5 aggregate polls taken since Oct. 20 are from GOP-friendly groups, all of which give Republican nominee Mehmet Oz a 2- to 3-point advantage over Democratic nominee, Lt. Gov. John Fetterman.

As TargetSmart CEO and data analyst, Tom Bonier, noted, “After a flood of GOP outlier polls in all of these races designed to create stories about an impending red wave and digging into why Dems are losing (“is it crime/inflation?”), NYT/Siena suggests not much has changed in these races in the past two weeks.”

Pro-GOP polls have also made their mark on FiveThirtyEight’s congressional generic ballot aggregate, as I noted last week.

As demonstrated above by the FOX affiliate coverage, the GOP-aligned polls have become part of a Republican feedback loop that is inspiring a disproportional amount of pro-Republican horse-race stories both locally and at the national level.

And yet, the latest round of New York Times/Siena surveys in individual races suggests Democrats are very much both holding their own and even beating expectations in some cases in both the House and the Senate.

The coverage hyping a GOP surge this cycle isn’t only misleading, it’s dangerous—particularly since it exists in an amped-up environment where most MAGA Republicans already believe they were cheated in the last cycle. Sure, Republicans might have a good night next week—that’s completely plausible. But most surveys taken by legitimate outfits suggest a very competitive landscape where Democrats could just as easily outperform expectations.

On The Brief podcast, we speak with Way To Win’s co-founder and vice president, Jenifer Fernandez Ancona. Ancona comes in to discuss how grassroots progressive groups are spending money in the hopes of getting as many voters as possible out for the midterm elections. She also talks about which campaign advertisements are effective and which are not. One thing is for sure, though: We are living in historic times, and what that means for these midterms cannot be easily predicted—so Get Out The Vote!

Meta is doing everything it can to kill the Metaverse, but hopefully Zuckerberg doesn’t destroy VR