Revisiting the Day One war update

We’ll use the map above, from the U.K. Minister of Defence, as the big picture overview of the state of the Ukraine War. Note that we’re still early in the process, with the fog of war in full effect. There is active mis- and disinformation surrounding combat operations, not to mention the general confusion that always emerges from combat zones. That said, we seem to have enough hard information that we can get some sense of the state of battle.

Looking at the map, the broad strategy is clear: use Russia’s puppets in the separatist Donbas region to put pressure on Ukraine’s eastern fortifications, while Russian troops execute a pincer maneuver to the north and south of Kyiv, both to cut off supply lines to eastern-based Ukrainian forces and to decapitate the government.

To that effect, Russian troops have pushed north from occupied Crimea, annexed by Russia in 2014. And from the North, Russian forces crossed over from Belarus, which is just a five-hour drive to Kyiv. Some reports suggest that Belarusian troops joined them. A third major Russian battle group crossed over in northeastern Ukraine, targeting the town of Kharkiv.

The map shows attacks on the port city of Mariupol, but reports on the ground have signaled the all-clear, aside from some shelling (reported literally as I typed this sentence out). No ground troops have hit the city, which is curious since it’s just outside of the Donbas region and a stone’s throw from Russia itself. That suggests that Russia is truly more interested in isolating those Ukrainian defenders by cutting them off from the rear than staging a full-frontal assault on all Ukrainian defenses.

So that’s the broad overview—a four-front war, with three of the prongs aiming toward Kyiv. Additionally, Russian paratroopers landed on an airport just miles from Kyiv, trying to secure an airfield close to their ultimate objective. So where do things stand now?

No one expected Ukraine to hold out against one of the top three armies in the world, and one with complete air superiority over the battlefield. Last night, it seems as if Russia might even get its best-case scenario—quick capitulation, as few reports of Ukrainian resistance emerged. Today, the picture is quite different.

Russia’s biggest success has been its southern flank.

The bottom half of that hourglass is Crimea, and Russian troops have pushed around 50 miles inward. Melitopol, the prong on the right, fell with little resistance just about an hour ago, after suffering heavy shelling.

That left prong, however, has become another matter entirely, as the town of Kherson is proving a tough nut to crack.

Ukrainian woman confronts Russian soldiers in Henychesk, Kherson region. Asks them why they came to our land and urges to put sunflower seeds in their pockets [so that flowers would grow when they die on the Ukrainian land] pic.twitter.com/ztTx2qK7kB

(If you’re wondering, the soldier brushes her off, saying “our conversation will lead nowhere.”)

That bridge in Kherson is critical for Russian forces pushing north. Here you can see Russian armor crossing it earlier today, before Ukraine (reportedly) retook control.

The left bank is the side with Kherson. If Ukraine truly does hold it, it means Russians on the other side are either destroyed and/or isolated from their supply lines. Look at how there’s no other way to cross that major river: 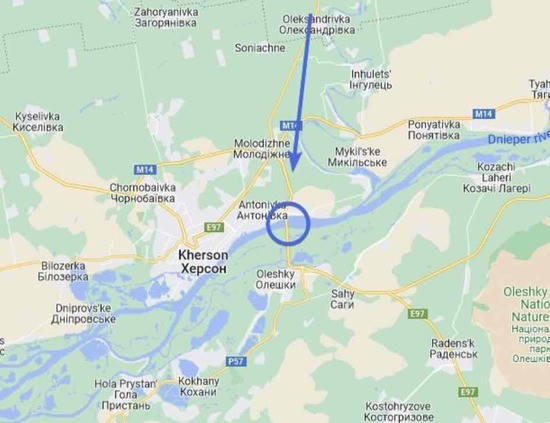 One bridge in the area. 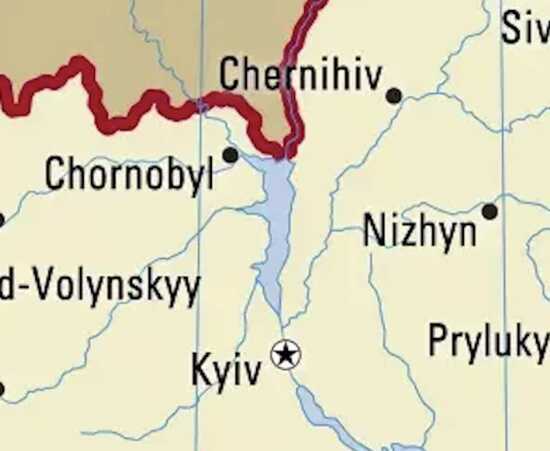 [Update: We now know that Russia was able to move quickly around Kherson, eventually capturing it a few days later, because of treason among the city’s leadership.]

On the other side of that body of water, Russian troops crossed into Chernihiv with minimal resistance, but seems to be having a rougher go of it pushing south. It is here that Ukraine scored a huge propaganda victory:

This was a motorcycle reconnaissance platoon, said they were told they were conducting exercises, and weren’t interested in any invasion. Even the Ukrainian ambassador to the United Nations was bragging about this development.

[Update: Okay, this is funny: I put Chernihiv “on the other side of the river” of Kherson, which is technically true, except that Kherson is on the right bank of the Dnipro way down in southern Ukraine, and Chernihiv is on the left bank of the Dnipro way up in northern Ukraine. I was still trying to figure out the map! Or maybe it was a cut-and-paste mistake, as I then go on to talk about Kyiv below. Still, the first explanation is funnier to me, so I’m going with that one!]

More importantly, Ukrainian forces repelled the occupation of the Hostomel airport just miles from Kyiv held by elite Russian paratroopers. Airborne operations are fraught—you are dropping lightly armed troops with no way to resupply in the middle of hostile territory. It’s chilling to think that the Russian paratroopers you see in this video are now all likely dead:

Breaking: @mchancecnn with Russian forces at the Antonov airport about 15 miles outside of Kyiv. “These troops you can see over here, they are Russian airborne forces. They have taken this airport” pic.twitter.com/SnvmwQ1GeA

It’s hard to over-stress just how important this kind of victory is for national morale. Wars are won and lost based on morale and a willingness to fight. The more stories of heroism they can broadcast, the stiffer the resolve for those doing the fighting, and dying, against a superior armed enemy.

Russia also faces a difficult situation in Kharkiv, which is one of those four fronts, in northeast Ukraine, between the main northern push toward Kyiv and the long-contested Donbas region. 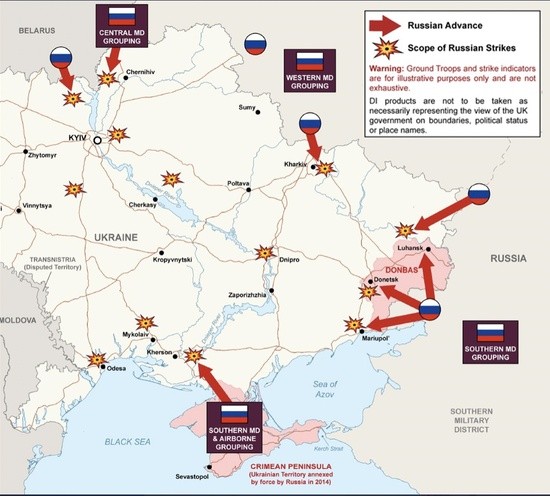 Kharkiv is just across the Russian border, and should’ve been easy pickings. But it’s holding out despite horrific missile and artillery barrages.

That is GRAD rocket artillery. Here’s what it looks like from the Russian side:

I know this kind of artillery system well. It was my job when I was in the Army. I wouldn’t wish anyone or anything to be on the receiving end. Civilians are forced to cower in the subway system for protection. And yet somehow, Kharkiv remains in Ukrainian hands. Just as encouragingly, to its north, the border town of Sumi continues to be heavily contested.

Sumi is also on the Russian border. Russia’s inability to push deeper into Ukraine in this region suggests that Moscow is certainly getting stronger resistance than expected. This has to be dramatically building resolve among Ukrainian defenders. And on a more tactical level, this takes pressure off Kharkiv’s defenses, which would otherwise be in danger of being surrounded. 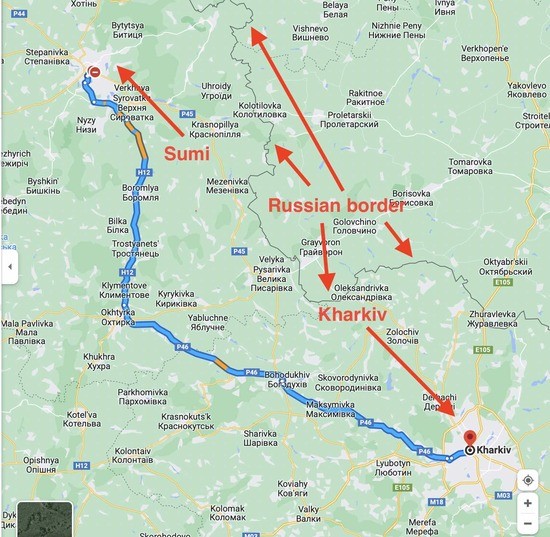 (For scale, the towns are about 100 miles apart, on the highlighted road)

This is Day One, just the first salvo of what will likely be weeks of Russian waves. Remember, Russia had nearly 200,000 combat troops surrounding Ukraine, and by all indications, only a small fraction of that has been committed.

But if Putin expected to be welcomed as a liberator (quite possible, like George W. Bush in Iraq), that certainly didn’t happen. And at least for now, Ukraine is holding firm against unspeakable odds.

Never underestimate the power of morale—the longer Ukraine holds firm in key towns, the better it rallies the populace and the rest of the country’s defense forces. Meanwhile, the opposite is true for Russia, with conscripts suddenly finding themselves facing their ethnic kin after weeks of hearing Putin say that Russia had no plans to invade.

This isn’t Chechnya, where they were killing Muslims. It’s a much harder sell pitting neighbors against neighbors. And unlike China, there is no great firewall keeping out alternate viewpoints. They all have phones. They can watch the videos and photos. No one wants to be a POW. Putin wanted a quick and decisive victory, one that would prevent internal dissent from crystalizing, both among military ranks and the general populace. That may still happen! Some western observers are predicting Kyiv will fall in a matter of hours or days. But there still appears to be plenty of fight among regular military units.

The longer this drags on, the more time for Ukraine to fortify its positions and get resupplied by the West, the longer the Russian people can rally for regime change, and the longer for Russia’s military establishment to decide its had enough. We’re just in Day One. Dark days lie ahead. But this won’t be the cakewalk Putin clearly expected.

These were fun follow-ups the following days: