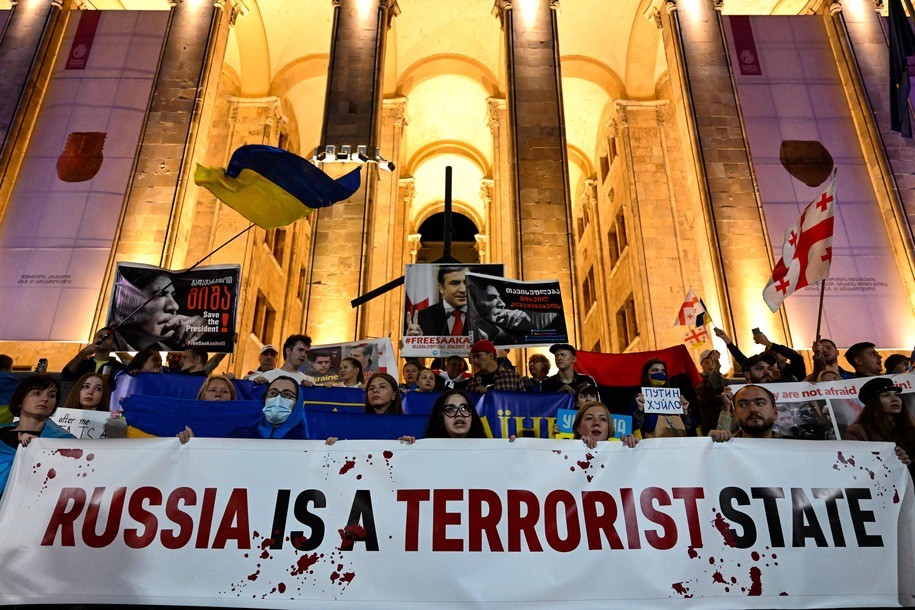 Battlefields are loud, but in the sense of movement, the Ukrainian front lines have been stable. Russians are happy to dig new fortifications and weird WWII-style straight trenches, and Ukraine is happy to let HIMARS and Excalibur precision-guided artillery shells degrade Russian artillery, command and control, and logistics in the rear. Unseasonably wet weather and the return of the famous mud isn’t helping. In other words, we’re back to “shaping the battlefield.”

With the front lines temporarily stabilized, Russian Telegram sources like Rybar are back to inventing fantastical claims of glorious advances, multitudes HIMARS rockets shot down by air defenses, and lots and lots of supposedly dead Ukrainians. Yesterday they were busy celebrating a supposed Russian counteroffensive out of Kreminna that was retaking lost territory toward Lyman. None of it was true, of course, pure nonsense. Pro-Russian Telegram is at its most honest when they’re panicking. And right now, they’re too busy celebrating Monday morning’s terrorist missile attacks.

Along with Russian leadership, Russian Telegram has surrendered any notion of winning on the conventional battlefield. Rybar teamed up with state television network RT to make a list of Ukrainian electrical substations, because heaven forbid they actually hit military targets in, you know, a war. They think that freezing Ukrainians this winter from lack of power (along with Ukraine’s European allies) will somehow deliver their elusive victory. At the very least, people will suffer, and Russia is happiest when others are suffering.

Yet that initial Monday celebration has started to turn sour. Here’s Rybar:

Russian Armed Forces strikes on the energy system of Ukraine: What conclusions can be drawn from the results of the strikes?

The attack targeted the main thermal power plants and combined heat-electricity plants, as well as substations with a voltage level of 330 kV.

Not a single strike was directed at 750kV facilities, much less nuclear or hydroelectric power plants. This clearly demonstrates that the raid was not aimed at total destruction of the whole power system, but at causing limited damage to it.

Even so, a massive missile attack by the Russian Armed Forces left regions and cities with millions of people without electricity for half a day. It showed the vulnerability of Ukraine’s energy system to Russian attacks, and the inability of air defenses to repel such attacks.

There is this recurring thread in all of pro-Russian telegram and even state TV that somehow, Russia is holding back, that it is pulling its punches, that it is taking it easy on Ukraine. In a different threat, Rybar claimed that the missile attacks were “relatively humane and hardly affected any critical infrastructure.” We can laugh at the notion, but Russians really believe the propaganda of their own greatness and effectiveness, and can’t fathom that their military is a paper tiger incapable of delivering the kind of nation-crushing blow they believe possible.

Open Source Intelligence (OSINT) sources estimate that Russia spent $600-800 million on their attack, which to their own admission only knocked out power for half a day, so they think Russia held back. Yet despite Ukraine’s admitted vulnerability to such attacks, Russia’s problem is that they simply lack the missiles to sustain that level of attack. And as is obvious to Russian nationalists, anything less than a sustained assault is essentially an empty gesture.

We will say it again: if the goal is to overload the power system of Ukraine for a prolonged panic among the population, to lower the morale and psychological state of the AFU and to win on the battlefield, then such actions must be repeated.

Another popular channel, Veterans Notes with 280,000 subscribers, is similarly annoyed at the lack of Russian follow through.

If what happened today (I mean the strikes on the ukroreich) was a one-time action, and I believe that this was the case, then this will not give the desired effect. The infrastructure of the Nazis must be knocked out non-stop for at least a month. When all electrical substations, bridges, communications and other vital infrastructure are destroyed, then we can talk about any significant success. The enemy must lose any opportunity to have access to modern means of transportation and logistics, as well as life in normal comfortable conditions. Shells should be carried to the front by carts and wagons, wagons should be carried along the remaining railway tracks by steam locomotives, and electricity and gas should generally become the subject of study only in history textbooks.

The popular Russian Telegram channel Turn on the Z War, with 575,000 subscribers, responded to news that Australia would increase its supply of weapons to Ukraine by throwing up its hands in frustration.

This is what many sane people have been talking about today. If our strikes were just another bunch of crap warnings, then we only helped the Ukrainians with the supply of new weapons. If our blows are constant for at least two weeks, they are fucked.

Rather than cow Ukraine into submission and terrify Ukraine’s allies into backing off, Russia’s actions embolden its allies to increase support, crossing previous limits on such aid (which are currently no long-range ATACMS rockets, no NATO-standard tanks, and no NATO-standard aircraft). I’m betting that by the end of the week, Ukraine gets its ATACMS. NATO defense ministers are meeting in Brussels today Wednesday and Thursday, and they ain’t meeting with Ukraine’s defense minister to maintain the status quo or simply offer winter gear. Russia is quaking at the prospect.

The fastest way to bring the conflict in Ukraine to the point of no return is to arm the psychos in Kiev with longer-range MRLs.

The elderly leaders of Washington obkom and NATO upstarts must use their softened brains at least sometimes.

As we know, nothing betrays Russian panic than when they make nuclear threats—something they’ve regularly done from the start of the war.

Rather than the sustained onslaught those Russian nationalists demanded, Russia’s missile barrage had already lost steam by Tuesday, relying on its plentiful and cheap S-300 air-defense rockets, set to ground attack mode, and its increasing supply of cheap Iranian suicide drones. The former don’t have the range to penetrate deep into Ukrainian territory, and the latter lack the punch and have proven vulnerable to air defenses, depending on volume to allow a handful to slip through. Both weapons can kill civilians and demolish playgrounds, but Russia simply doesn’t have large stocks of its expensive heavy-hitting missiles to hit and seriously damage actual critical infrastructure targets. If they had those weapons, they would use them.

If Putin hoped his performative terrorist temper tantrum would get his nationalist critics off his back, the gesture has already backfired. The ghouls didn’t want a one-time HULK SMASH strike, they want the systemic elimination of Ukraine’s infrastructure and the ability of its citizens to lead their lives. They want a giant pile of blood-stained rubble, punishing the insolent subhumans who refuse to bow to Russian greatness.

Horrific insight into the medieval mindset of the Russian criminal leadership. A religious theme of extermination of “Satanist Ukrainians”. This has become an incredible struggle of survival for the Ukrainian people. Vital we stand with them. https://t.co/d2kR4mFoQy

Putin’s little temper tantrum may have killed a bunch of people, but it had very little lasting effect on the nation of Ukraine, and it’s obvious for everyone to see.

Yesterday, the #Russian missiles left huge holes in the middle of our cities. All night long, 🇺🇦services worked to restore the damaged road connections & public services. Step by step, we’ll bring our cities to a peaceful routine.

So what happens now? Russia is in reactive mode, its forces cowering in terror inside trenches as they await Ukraine’s next move (or worse, its next HIMARS strike). Its strategic rocket forces lack the weaponry to deliver the infrastructure blows Russia’s bloodthirsty nationalist community demands. Winter is coming, and while NATO works to deliver the cold-weather gear Ukrainian forces will need, Russia is still trying to figure out who stole 1.5 million winter coats they thought they had available. And Ukraine’s NATO allies have the excuse, or call it a moral impetus, to finally deliver long-distance ATACMS rockets to finish off the damaged Kerch bridge and hit Russian military infrastructure even deeper inside Russian-held territory. Heck, throw in NATO-standard modern battle tanks and F16s in the mix.  We’re already placing long-term orders for Ukraine’s future needs, it’s time to go all-in.

Kateryna Brynetska, alias “Greta”, is a rifleman in the 78th battalion of the 102nd separate brigade of the Territorial Defense Forces of the Ivano-Frankivsk Armed Forces pic.twitter.com/f6TiWCieqm

Slavic culture can be racist, sexist, and homophobic. This war is shattering those “isms” in Ukraine.

There’s a long way to go in Ukraine, but the progress is real. So much so, that it’s become a Russian talking point.

Meanwhile on Russian state TV: Apti Alaudinov, the commander of Ramzan Kadyrov’s Chechen detachment “Akhmat,” tells the new volunteers that they are in Ukraine to fight against gay parades.

Host Olga Skabeeva wishes all of them the best of luck. pic.twitter.com/x9wduSghvP

A thread on total RU and UA losses from @Volya_media , who has provided very accurate and granular data for some time on a number of subjects.

I encourage you to read the source:https://t.co/sW2l7Zn4qu