Russia completes its conquest of the Republican Party, but Ukraine holds

To see how pervasive the idea that Republicans would save Russia had become, you don’t have to listen to speeches from Vladimir Putin or Sergei Lavrov. It’s in the despair of this conversation between a Russian soldier and his wife following the elections.

Wife: Ukraine is so small. Why is it taking so long? You were telling me you were waiting for the elections on November 8, but what’s the point?

Russian soldiers on the front lines in Donetsk were expecting salvation, not through some action of their own country, but from what Republicans could do after winning the election. They be more disappointed about the outcome than Kari Lake.

But don’t worry. Republicans have a solution to this problem—maybe even an ultimate solution—one that would not just deliver those Russian soldiers from peril, but hand Vladimir Putin a smashing victory that goes infinitely beyond Ukraine. Here it is that solution, delivered by former Reagan aide Bruce Fein writing in The Hill.

“Congress can end the war in Ukraine and win a Nobel Peace Prize by enacting a statute withdrawing the United States from NATO — transforming it from a mighty offensive oak into a tiny acorn unalarming to Russia.”

We’re at the point where a former member of Ronald Reagan’s White House is lecturing us on how we should stop making Russia feel scared and not get in the way of their invasion. For peace.

The entire piece is not only devoted to destroying NATO, but to explaining how poor little Russia was forced to launch its bloody invasion after being “provoked” by the United States. It doesn’t explain how the United States provoked Russia into attacking Chechnya, Georgia, and Syria. But they’ll get around to that.

Could Republicans still pull Putin’s ass out of the fire? If they had both Congress and the White House, they could. It’s a very good bet that they would. This isn’t some new idea expressed by some single outlier. Pulling the United States out of NATO is exactly what Donald Trump threatened to do back in 2018. As Hunter reported at the time, “[Trump] doesn’t joke about his praise for dictators and his willingness to play ball with autocrats, and despite the damage-control efforts of an anonymous senior administration official, he ain’t joking here. He’s been blustering about either ’renegotiating’ the United States position in NATO or abandoning it since the campaign days.”

Giving Russia the freedom to attack Europe might have been something that most Republicans thought ridiculous when Trump was coming down that gold escalator. They don’t think that way now. Starving NATO to please Putin has become a central tenet of Republican politics. They want to gift Russia with something that Russia could never win on the battlefield; not just victory over Ukraine, but victory over NATO. And the United States.

Today is the day of remembrance for the the Holodomor. Though most here are likely already familiar with that term, it refers to a period in 1932 and 1933 when the whole of the Soviet Union was facing a food shortage due to unusual climate conditions and bad planning (this was also a Dust Bowl year in the United States, with back to back years of record high and record low temperatures).

However, Ukraine was the largest grain producing region in the Soviet Union at the time and had a relatively abundant crop. Under the cover of the general shortage, Joseph Stalin placed grain quotas on Ukraine that essentially robbed the nation of all its food. With corn and wheat carried away by the Red Army, Ukrainians were deliberately left to starve. There are even reports of food being destroyed to accelerate this process. Estimates of the resulting genocide range from a low of 3 million to as many as 10 million dead. Stalin followed this by a program of encouraging more Russian settlement in Ukraine.

Both commentators on Russian state media and translated messages from Russian military have suggested that Russia should have a second Holodomor as a means of punishing Ukraine.

This haunting painting (1933 by Victor Tsymbal) captures the suffering of the Ukrainian nation.

It depicts the ascent into heaven of a mother and her child.

Poles were also hard-hit as 50.000 Poles living in Ukraine lost their lives. pic.twitter.com/9UcVwOZ56s

It’s been common since the start of the invasion for pundits in the United States to repeat propaganda from Russian state media claiming that the sanctions are having little impact on the Russian economy. However, as The Washington Post reports, it’s getting a lot harder to pretend that Russia isn’t hurting. Badly. And that failing economy is having an increasing impact on the battlefield.

For months, Putin claimed that the “economic blitzkrieg” against Russia had failed, but Western sanctions imposed over the invasion of Ukraine are digging ever deeper into Russia’s economy, exacerbating equipment shortages for its army and hampering its ability to launch any new ground offensive or build new missiles, economists and Russian businessmen said. 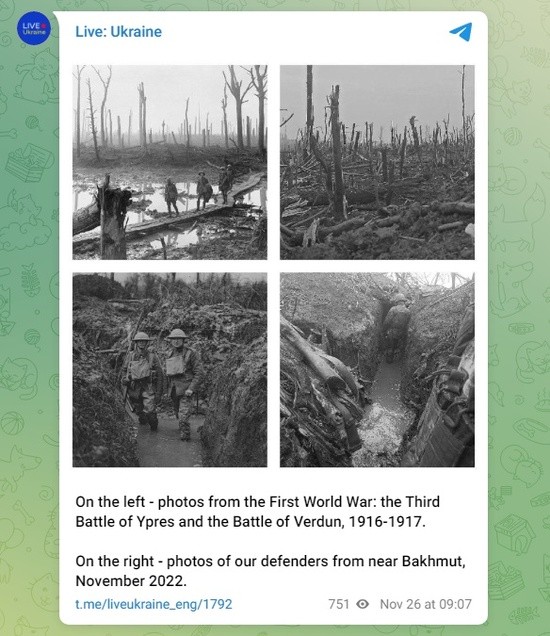 Just a few of the Ukrainian troops, out there in the cold and snow, facing off with a bloody-minded enemy who is trying to destroy their nation and their people. How are they holding up?

Election season overtime is finally winding down, so Democratic operative Joe Sudbay joins David Nir on The Downballot as a guest-host this week to recap some of the last results that have just trickled in. At the top of the list is the race for Arizona attorney general, where Democrat Kris Mayes has a 510-vote lead with all ballots counted (a mandatory recount is unlikely to change the outcome). Also on the agenda is Arizona’s successful Proposition 308, which will allow students to receive financial aid regardless of immigration status.

Over in California, Democrats just took control of the boards of supervisors in two huge counties, Riverside and Orange—in the case of the latter, for the first time since 1976. Joe and David also discuss which Democratic candidates who fell just short this year they’d like to see try again in 2024, and what the GOP’s very skinny House majority means for Kevin McCarthy’s prospects as speaker.