When Ukraine made a push last week and drove Russia back from Kuzemivka, I was ready to spend today talking about a lot of “Where do they go now?” Drive south for Svatove? Move at Nauholne with the goal of reaching Nyzhnia Duvanka first, and let the forces coming in from the west and south deal with Svatove?

However, that option went off the table at the end of the week when Russia launched a heavy counterattack at Kuzemivka. This included using a TOS-1 launcher, positioned along that road to the east, to bombard both Kuzemivka and Novoselivske with window, wall, and lung-shattering thermobaric weapons. This attack appeared to succeed in driving Ukrainian forces out of Kuzemivka and back across the railroad tracks. The bombardment has also largely destroyed Novoselivske, as the thermobaric weapons did what they were designed to do: Utterly wipe out the town, one block at a time.

Next, Russia tried to continue its counterstrike by moving into Novoselivske. However, when Russian armor topped that rise between the two towns, they found Ukrainian forces still waiting for them. Russia appears to have been surprised. They may also have been surprised by just how well an older T-64 can perform when it’s been given some heavy upgrades.

So, after all that … things are back to where they stood at the beginning of last week. Or at least they are when it comes to the lines on the map. Ukraine is in tacit control of Novoselivske, while Russia holds Kuzemivka. Except that today there are almost 100% fewer buildings in either town, and a lot of dead people—soldiers and civilians.

However, the world is not without progress. In the map above, I’ve deliberately extended the frame to the north. That’s because Ukraine is continuing to clear out Russian occupiers who remain in the northeast corner of Kharkiv Oblast. Based on Russian shelling over the last few days, Ukraine has liberated Nova Tarasivka. It’s likely that the Mykolaivka northwest of this position is also liberated (it’s tiny enough to escape mention in the lists).

Ukraine had also reportedly liberated much of the area around Volodymyrivka (helpfully misspelled on the map today as Volorymrivka) as of Sunday, and may have cleared that entire area now. However, it’s yet to show up on the list of sites that have either been officially liberated, or are reported as sites Russia shelled or attempted to assault. So it’s yellow until we hear something more.

Near Svatove, an active battle is reportedly underway at Kolomyichykha, which is heavily contested. Ukrainian forces have reportedly repelled a Russian attack attempting to move west from Kryvoshyivka. 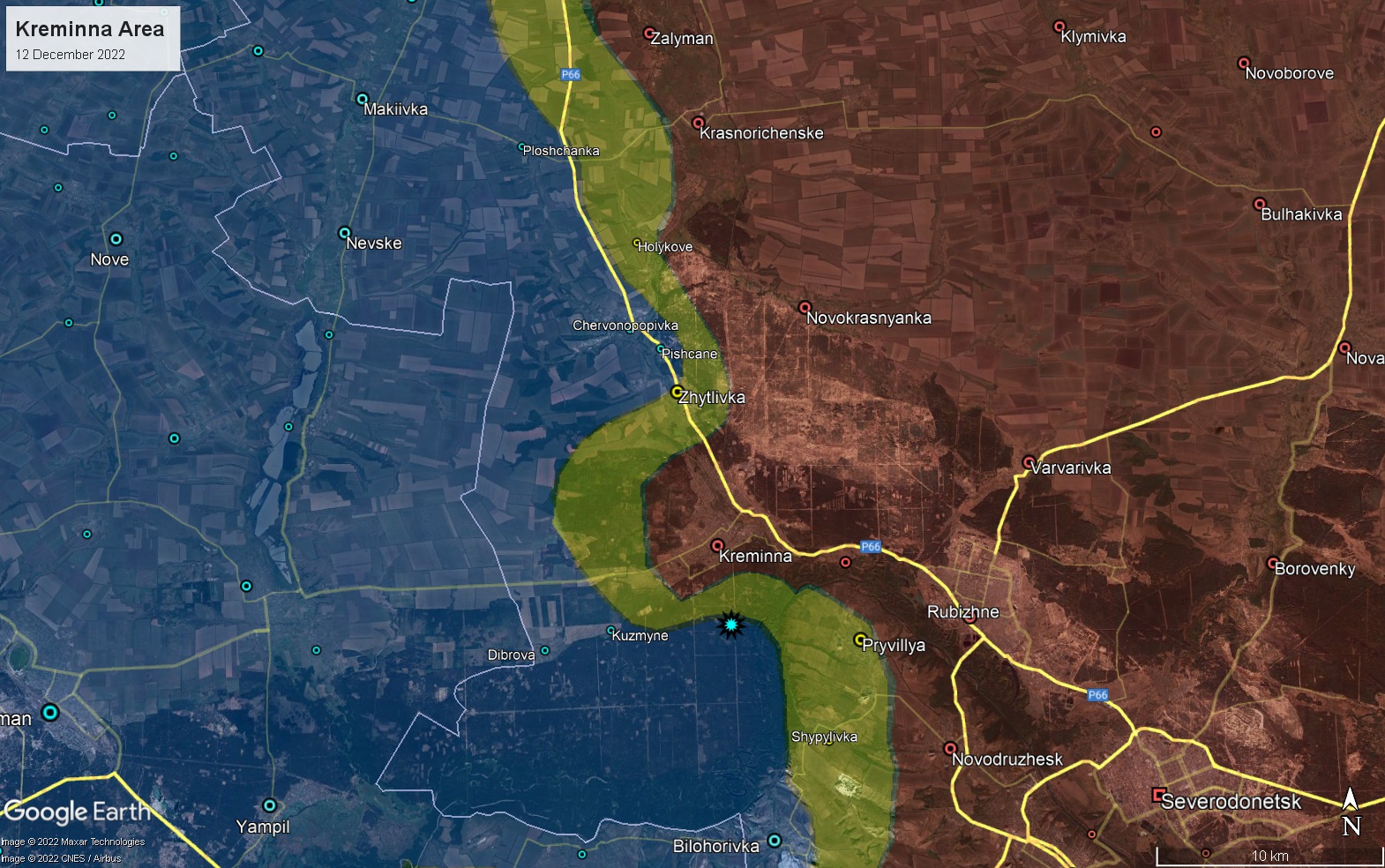 Kreminna Area. Open in another tab for a larger view.

The biggest news near Kreminna is how well Ukraine is settling into the P66 highway. In the last day, Ukraine has reportedly repulsed fresh efforts to move their forces from Chervonopopivka, Ploshchanka, and the forest south of Kreminna. Based on past reports and the locations being bombarded by Russia, there are good reasons to believe Ukraine also controls Dibrova, Kuzmyne, and Pishchane. There were reports on Monday that Ukraine had liberated at least part of Zhytlivka, but does not yet control the whole town.

Reports that Ukraine was moving toward Pryvillya at the end of last week appear to have gotten lost in the fog somewhere. There’s no more word on action in that area. However, given that Ukraine has reportedly turned back at least two attempts by Russia to clear Ukrainian forces from the national forest area south of Kreminna, it may be simply that those Pryvillya-bound forces hooked a left to join up with Ukrainian troops already there. As many analysts have noted, going for Pryvillya right now not only involves crossing a river, but also some very swampy lowlands. That might be an issue at the moment.

Kudos to the driver on that MT. Having tried to operate track dozers in muddy environments, feathering those controls to keep things moving in the right direction is definitely an art.

Ukraine also reportedly repelled what had been a reportedly large assault on Bilohorivka, at the south end of this map. The site of Russia’s triple disaster in attempting to forge a crossing of the Siverskyi Donets River, Bilohorivka now holds an important position for Ukraine, in addition to being the first location in Luhansk Oblast to be retaken during the counteroffensive that began in September.

The head of the Ukrainian military in the oblast continues to be very upbeat about progress in the area in an interview with Ukrainian Pravda. It’s just that right now, every move not made on the highway is a move made in soup. Cold weather can’t come soon enough.

And, what do you know—it’s cold today. In fact, temperatures in the area are barely going to crack freezing all week. So maybe there will be some movement ahead that doesn’t occur in sludge.

A very much not a rumor this time, Tu-141 drone. These drones, with bombs in place of old film and camera pods, are suspected to be one of the tools Ukraine used to strike over 200km into Russian-occupied territory.

Launch of a Soviet-era Tu-141 drone, that the UA has been modernizing, from a tubular launcher with covers. It is believed they deployed them during the recent strikes on RFAF bases deep within Russia. Date, location, source unknown. Unique…#OSINT#UkraineWar pic.twitter.com/3R2VgSrQbs

In Bakhmut, Russian forces are again pressing in around the cement factory. And yes, they’ve been there before. Bakhmut holds. However, there are numerous reports that Russia has made a significant advance.

Both sides seem to confirm a Russian breakthrough today at the Eastern side of the town. There are also some claims that RU captured the Artwinery factory.

Some of this may be legitimate repositioning on the part of Ukrainian forces, who reportedly finally moved out a number of units that had long been trapped on the Bakhmut front line and brought in units from the Kherson area. So it could be just a matter of new people in new positions they feel better able to defend. Or it could be the start of Russia actually making a real advance. Stay tuned.

And despite significant evacuations over the last few days, thousands of civilians are still in the city. Like the lady in the picture at the top of the story, who is shopping in what apparently is a still functioning grocery store. Ordinary people. Their resilience is beyond measure.