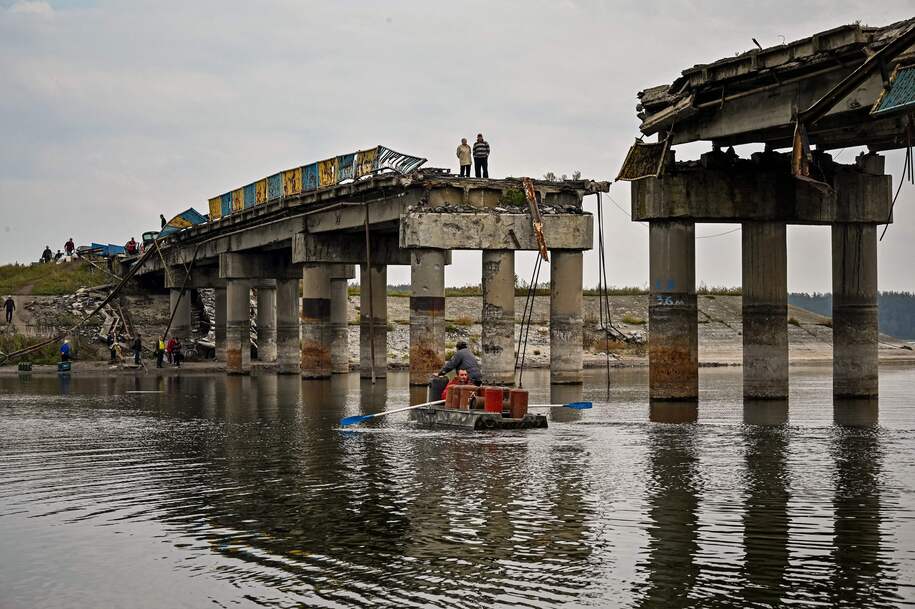 This is that bridge at Staryi Saltiv, which once seemed so critical in the effort to reach Vovchansk. Turns out it wasn’t needed.

Right now, Russian sources on Telegraph are evenly divided. Half of them are convinced that Russia is sending, or has already sent, massive reinforcements that will keep Lyman in Russian hands forever. You can take your pick on whether these are Wagner forces rushing in from Kreminna, or “tactical rescue teams” that have swooped down from Svatove, or four units of the “58th army” cruising down from the north to save the day; these folks are convinced that these forces already are, or soon will be, planting that Russian flag in Lyman forever.

The other half of Russian sources are busy reporting that Russian forces are already abandoning their last positions in Lyman, and describe heavy fighting near Zarichne as the Russian forces that formerly held Drobysheve, Yampil, and Lyman make a last-ditch effort at escape.

Here’s what we know for sure. This is Drobysheve:

The sources that have been most reliable in the past indicate that Russia is attempting to hold the road out of Lyman open with “all available resources.” That accounts for the heavy fighting at the intersection between Zarichne and Torske. But it seems far more likely those forces are holding the road open in an effort to get people out, than they are trying to get more people into a position that has become an obviously unsustainable deathtrap. Putting more men into Lyman would be nothing short of murdering them. Even for Russia, that would be next-level foolish.

If Russia is doing anything right now, it’s a salvage operation, in hopes of getting as much equipment out of Lyman as possible before it all ends up with a new Ukraine-themed paint job, 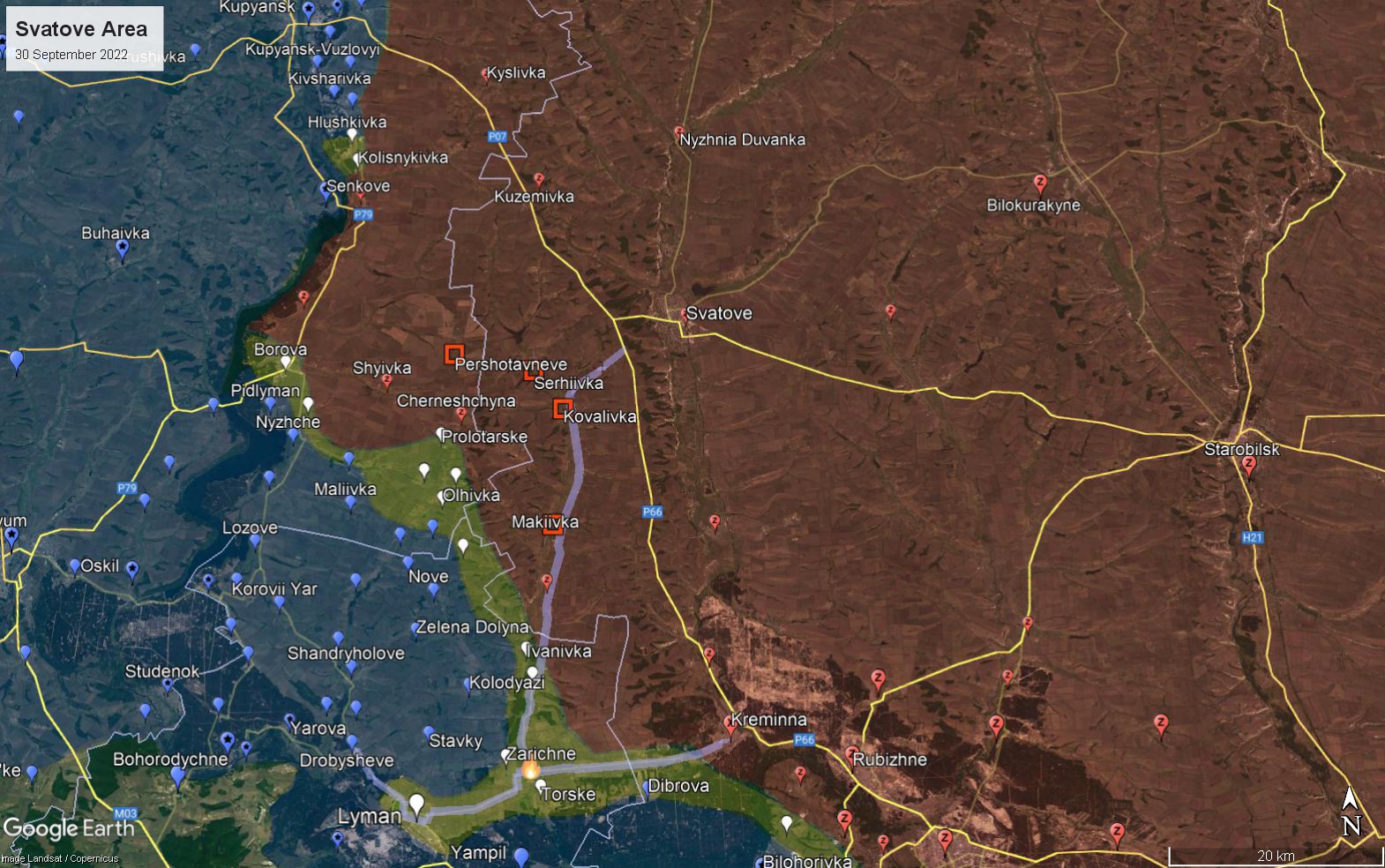 Russian prepare to defend against expected attack on Svatove

What even more sources are talking about is: What comes next? And most Russian forces fear that what comes next is a Ukrainian move toward Svatove.

As things draw to a close in the Lyman area, Russia is reportedly reinforcing a number of towns to the north east, in an attempt to prevent a Ukrainian advance on Svatove from the direction of Lyman. That includes hardening at least four towns—Pershotavneve, Serhiivka, Kovalivka, and Makiivka—which have been marked on the map with special “Russia is reinforcing here” squares. Whether these reinforcements are more real than the east-west line that Russia was supposedly building at Borova remains to be seen.

The problem for Russia in defending Svatove is that, while it can be reinforced and resupplied from many directions, it can also be attacked from almost any direction. If Russia reinforces that narrow highway running north past Zarinche, Ukraine might choose to move east to Kreminna, take that city, then move up the much nicer P66 highway. They might even decide, while they’re in the neighborhood, to take a look at Rubizhne, Lysychansk, and Severodonetsk.

That’s just the southern side of things. Over along the Oskil River to the north, Ukraine has been solidifying an expanding the bridgehead made at Kupyansk and Dvorichna (off map to the north). In the past few days, they’ve been systematically fighting off Russian attempts to roll back their gains in this area, while continuing to move down river. That includes liberating Kivsharivka, the third-largest city in Kharkiv Oblast east of the Oskil.

There are reports on Friday that Ukraine has already liberated Hlushkivka and Kolisnykivka, bringing this southward advance into the area directly across from Senkove. That places them just 15 kilometers north of Borova. Other Ukranian forces moving up the river from the south entered the south edge of Borova two days ago. As the area around Lyman gets cleaned up, expect Borova to get extra attention from both directions—and for Russia to once again be in a position of deciding not how to hold the city, but how best to get out.

There is a road running east out of Borova to Pershotavneve. As long as that remains open, Russia can extract its troops. But Lyman has demonstrated once again that Ukraine is able to maneuver to cut off lines of supply and communication. Borova likely has days, not weeks, before the garrison there has to surrender or flee.

With Borova clear, Ukraine can go … anywhere it wants, really. Russia may feel that Svatove is the obvious target, and since that is reportedly the site of most of the troops and equipment that Russia managed to pull out of Kharkiv in the face of the counteroffensive, taking Svatove would seem to be a very serious blow.

On the other hand, both at Lyman and Balakliya, back at the start of the counteroffensive, Ukraine did not do the Russian thing of hurling themselves headlong at the most fortified position. They did the smart thing, bypassing Russia’s “hard point,” getting into the weakly protected backfield, and using quick, decisive actions to isolate and weaken the fortified position before returning to pick it up almost as an afterthought.

The same thing could happen with Svatove. Even if Ukraine makes this location its next target, don’t expect them to just roll up to the city and sit under Russian guns. Expect them to hit Russia where it’s weakest, and to take Svatove when it’s ready to fall.

However, softening up that city, or any other, may be made a lot easier by some crates of new ammo seen lingering in Ukraine.

#Ukraine: Ukraine received new rockets for HIMARS/M270- here we can see a pod of M30A1 guided rockets.
M30A1 differs from previously seen M31A1/A2 by an alternative warhead with 182000 preformed spheroid steel/tungsten fragments and is designed to be used against soft targets. pic.twitter.com/iAUkjPuaEn

Kos has talked about these munitions before. But it’s hard to get a sense of what an impact these weapons have on the battlefield. This isn’t the kind of rocket that’s designed to take out Russian bridges or Russian supply depots. It’s the kind that’s designed to take out Russians. And you really need to watch the following video to get some understanding of just how frightening it is.

Precise, fast, accurate and brutal – here is a Lockheed Martin video showing how these rocket with 182,000 pre-formed tungsten fragments shred everything. pic.twitter.com/JIJh72McH9

This is a weapon that is designed to clear enemy forces from an area greater than 100 meters by 100 meters with one shot. And it can be delivered with a range up to 90 kilometers. It doesn’t seem that Ukraine has so far used the M30A1 in action because otherwise, clusters of soldiers like those which were holding out in Lyman … probably wouldn’t exist.

What does this weapon mean for those who have pondered its use in Ukraine? It means that a full pod of these rockets on an M270 could do this.

Meanwhile, this is how Russia is using its few high-precision weapons.

On the morning of Sept. 30, Russian troops launched a missile attack on a line of civilian cars on the way out of the regional center, according to Zaporizhzhia Oblast Governor Oleksandr Starukh. pic.twitter.com/6t2UPVM0N6

Which of these weapons, and these uses, is more likely to win a war? Oh, and in the last few minutes as I’ve been writing this, reports have come in that both the remaining forces at Lyman and the forces trying to hold the road open are now surrounded.

This is a good look at that one road that may or may not be in Ukrainian hands, but in any case, is an easy artillery target:

Lyman is now surrounded and cut off after a week of Ukraining pushing. One road to the east is the single evacuation point for 5k (or so) Russians with zero cover. There’s a primary Russian supply line. Here’s that road. pic.twitter.com/8jXG968uWl

It’s a good time to once again honor those poor territorial defense forces being slaughtered in the trenches of Donbas and Kherson oblast, yet holding out against unimaginable odds, to give these guys the 5-6 months they needed to properly equip and train for this offensive.

Also, imagine if Russia wasn’t so fucking stupid, if they actually worked on properly fighting a modern war. Things would look a lot different.

“It is another demonstration of Putin’s inability to align his desired political outcomes with the capacity of his military. This has been a characteristic of the war from day one. The Russian military is incapable of achieving what Putin has directed it to do.”

Today’s speech by Putin is a milestone in the Russo-Ukraine War. It may be useful for Putin in a domestic politics sense. But, as has been the case throughout this war, it is terrible strategy for Russia. A thread on the implications of Putin’s latest ‘bold’ move. 1/25 pic.twitter.com/yJZgG8w5Pt

There are reports that Ukraine has liberated the small town of Terny. 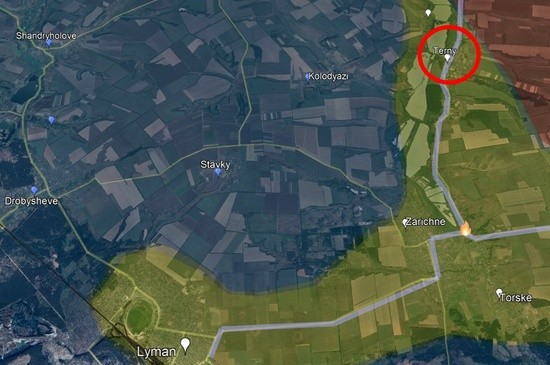 Ukrainain forces have reportedly gained a foothold across the Zherebets River.

This might not mean much tomorrow, but at the moment it’s both sitting along the main route by which Lyman might be relieved from the north, and it’s the first foothold for Ukraine on the eastern bank of the Zherebets River. That river is normally little more than a stream, but it’s swollen by all the rain that has fallen in the last two weeks, so it could have presented an obstacle to operations north of Lyman. Except, it seems, it didn’t.

It’s not clear if Ukraine now holds all of Terny, which is a rather spread out farming town, or just has that portion on the west. Either way, they should have control of the highway.

Woah, the front has moved dramatically in this last day.

Russian military reporter WarGonzo also confirms. In a follow up tweet, someone translates, suggesting these are forces that have pulled back from Lyman area.

To see where this is, here’s Mark’s last map: 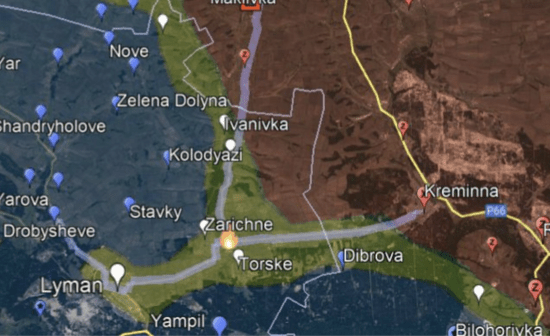 If Ukraine is hitting Kreminna, there’s a lot of yellow and red there that is now Ukrainian blue.

This week on The Downballot we check in on Pennsylvania, where Republican Doug Mastriano has called for “40 days of fasting and prayer” to save his ailing campaign for governor; dig into ad spending numbers that show Democrats airing far more spots because they aren’t relying on super PACs; circle back to the J.R. Majewski stolen valor scandal, which prompted the NRCC to cut him loose; and recap the dispiriting results of Italy’s general election, which saw the far-right win for the first time since Mussolini.