Where I am this morning, the temperature is -22°C. I wish I could export a bit of this to Ukraine, because it would really help solidify those roads around Svatove and Kreminna. The actual temperatures in the area this week are hovering around freezing; highs a few degrees above zero, lows a few degrees below. So while there is surely some freezing going on, any movement that’s waiting for the kind of deep freeze that would allow rolling T-72s across a corn field is going to have to wait a while longer. 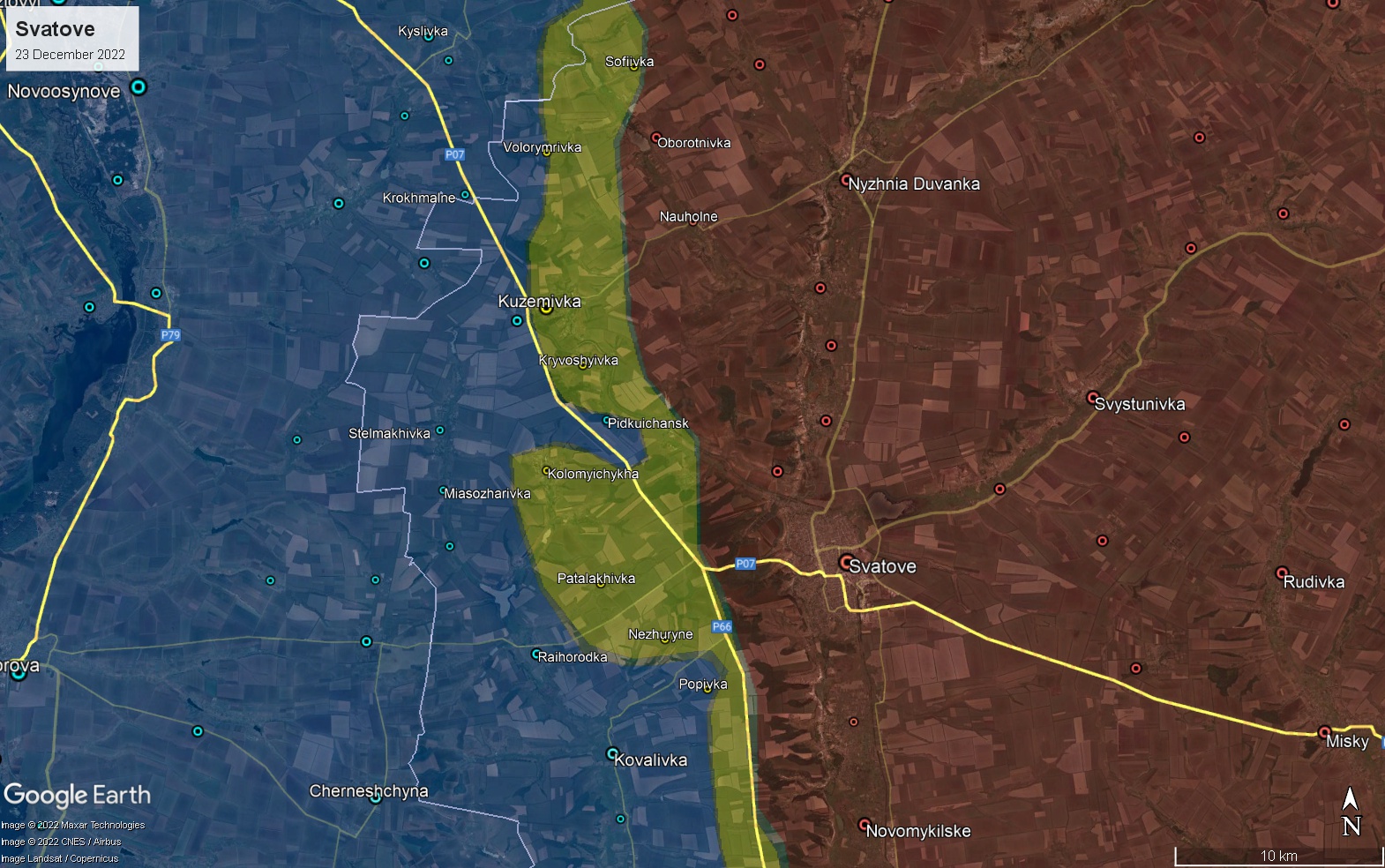 Svatove area. Open image in another tab for a larger view.

Multiple reports on Friday indicate that Svatove itself has been all but emptied of Russian forces. That’s because everyone available has been pushed out to stop reported Ukrainian advances, including that one near the village of Pidkuichansk, where Ukraine was able to bypass Russian forces located to the north and cut across the highway to come within a few kilometers of Svatove. The two main Ukrainian counterattacks continue to be at Pidkuichansk, and at Volodymyrivka to the north.

On Thursday, Russian sources were reporting that Russia was launching their own attack from Kolomyichykha in the direction of Stelmakhivka. Not only did that attack apparently come to nothing, on Friday there are reports of fighting in Kolomyichykha, with Ukrainian forces advancing on that position as well as another location between Kolomyichykha and Patalakhivka. It looks like Ukraine may finally be cleaning up that area of Russian occupation west of the highway.

If Ukraine is able to push back Russian forces along this line, then Kuzemivka, which was the source of so much back and forth over the last month, could become a backwater—especially if a breakthrough east of Volodymyrivka allows Ukraine access to that north-south route into Svatove. Things have been moving slowly in this area but they are moving, and after weeks of testing various positions along the line, Ukraine appears to be making progress in the area directly west of Svatove.

In the Kreminna area, Russian sources have released drone footage of artillery firing at Ukrainian forces just south of Ploshchanka. It’s not clear when this video was taken, but it does seem to indicate that Russia has no ground force in the area and is restricted to trying to strike the Ukrainian force from a distance. (In the video, they seem to miss.)

Kreminna area. Open image in another tab for a larger view.

Ukrainian forces near Dibrova reportedly repelled a Russian attack to the west, which is a pretty good indicator that Ukraine continues to hold this area. Meanwhile, Ukrainian forces in the woods south of the city continue to advance to the north. Russia has reportedly laid out a series of trenches and fortifications that run pretty close to the yellow line of the road you can see around the name Kreminna, and Ukraine should be close to testing that line.

There are some indications that Russia is having difficulty getting supplies to Holykove, but still no signal that Ukraine has made progress in liberating this location. While Ukraine continues to hold the areas it had previously taken around Chervonopopivka, there are currently no reports of new progress north of Kreminna. It’s unclear if Ukraine will attempt to take the city without clearing this approach.

This wins the award for most bassackwards reasoning so far by a Russian leader. That’s a pretty high bar, but I think Gerasimov has set a new standard.

“Ukraine was threatening the world with nuclear terrorism and only Russia was able to save everything,”- Valery Gerasimov, Russian Army Chief of the General Staff and deputy MoD.

His audience is clearly puzzled by this version of events. pic.twitter.com/N3dBPZEqvN

A possible indication of the direction Ukraine might move next. Tokmak is in Zaporizhzhia oblast, north of Melitopol.