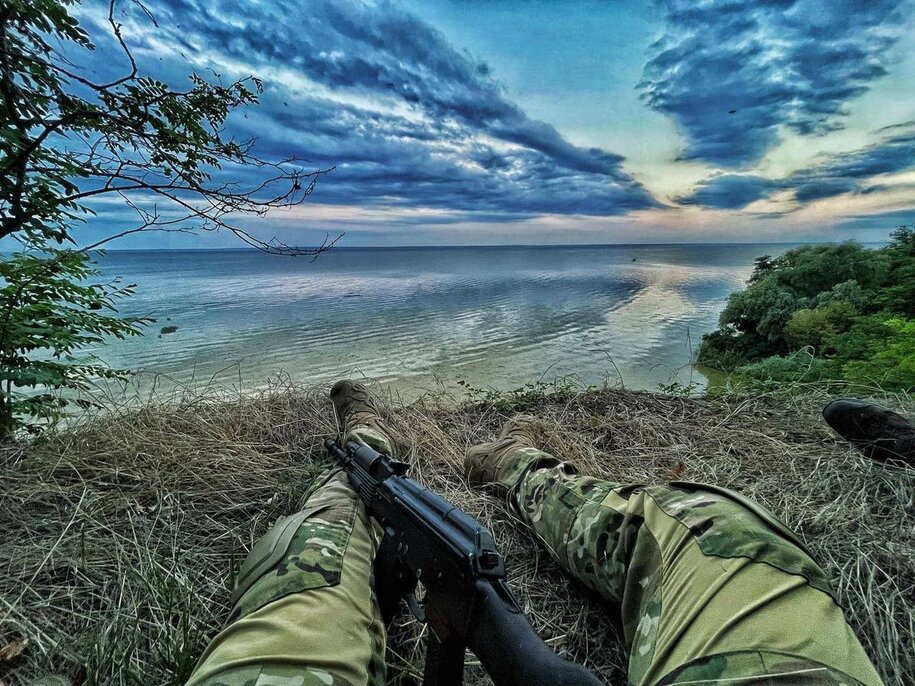 We haven’t talked much about Pavlivka before (prewar population: 1,000). 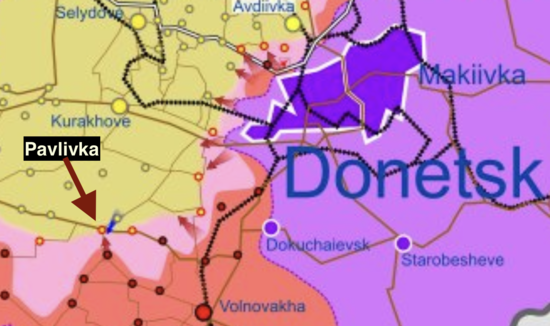 Pavlivka is located in a grinding part of the front. Russia has occupied the purple territory on this map since 2014, so you can see the general lack of progress pushing westward since the war began. Most of those red gains have come from the south, up from Mariupol. 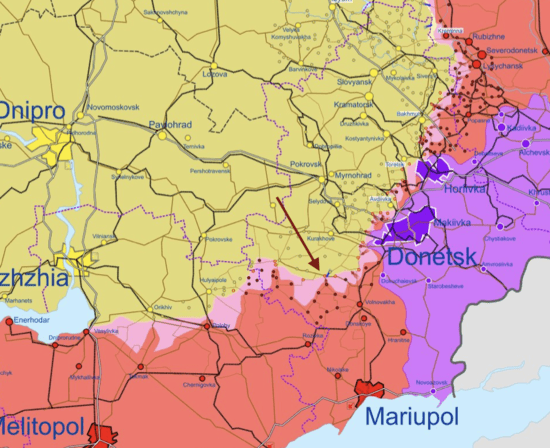 The arrow points at Pavlivka

This line hasn’t budged very much since the Spring, yet Russia seems very interested in this area of late, so what’s at play? Perhaps it’s logistics: 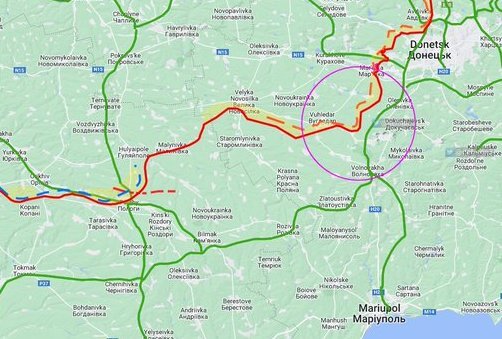 The green is railways

With the destruction of the rail line on the Kerch Bridge into Crimea (which still hasn’t been repaired), Russia is currently struggling to supply Kherson and occupied territory in southeastern Ukraine via rail. The rail connection between Mariupol and the rest of that region is currently under fire control of Ukrainian tube artillery. The magenta ring is the range of M777 tube artillery using standard-range rounds—21 kilometers, or 13 miles.

Still, that entire east-west rail line is currently in range of HIMARS rockets, as well as extended-range howitzers and speciality rounds. A French Caesar self-propelled artillery gun has a firing range of 42 kilometers (26 miles), so Ukraine would only be slightly inconvenienced by any Russian gains along that front. That rail line isn’t becoming operational any time soon.

Despite that, Russia launched a massive attack on the settlement sometime around October 30-31. First video of the battle was this video:

#Ukraine: The Ukrainian 72nd Mechanized Brigade destroyed a Russian T-80BV tank with a Stugna-P ATGM strike. A Russian BTR-82A APC can be seen damaged/abandoned nearby. pic.twitter.com/np11w8Of6O

This is called the “flying tank man” video, as a body is thrown upon the tank’s detonation. This drone view of the ambush shows it more clearly, so click at your own discretion. The good thing about that linked video is that it gave the geolocators the material they needed to do their work.

2.) We can assume that many Russian vehicles have entered Pavlivka, but also failed, because the destruction of the flying Russian’s tank proves that Ukrainian forces destroy Russian tanks in the orange killbox, even laying mines. The ATGM came also right in front of the killbox. pic.twitter.com/sit8r7CN0O

The attacks came head-on from the south. “Killbox” is the right word. Look at this video compilation of Russian armor decimated in that approach:

Russians claim that they have entered Pavlivka but all what we saw so far are Russian armor being decimated left and right by Stugna-P ATGMs. If Russians have entered that town then only under heavy losses. And they lost the town before. #Ukraine #Pavlivka pic.twitter.com/CTEx824tXu

Early last week, Russian sources were claiming victory. And we do know that Russian forces did eventually push their way into the town. But it wasn’t long before the tone from Russian sources was turning sour, as one Russian Telegram source reported:

You know, there were persistent rumors “around the city” that,
just like in the Great Patriotic War, the commander who takes
Ugledar [Vuledar] will be given a Hero. Now, they say the same thing, but we are already talking about Pavlovka, which I remember was already “cleaned up”, but something went wrong. In reality, they entered the outskirts and that’s it, the process stalled, in general the situation is clear: “pull-push” will continue for quite a long time and, most likely, without particular success. Why does this happen? The mobilization in Russia has passed, the forces are now available, right? The answer is simple: it’s on the chest. A harsh answer, but a true one, and the village we are talking about is actually Pavlovka.

Actually, Russia got through Ukrainian lines, deeper than the “outskirts.” Here are Ukrainian forces celebrating the capture of a Russian tank with the engine still running inside the town, reportedly its center:

We also know, from Russian reports, that Ukrainian forces counterattacked and trapped a significant contingent of naval infantry troops inside the town. Here’s a report from Russian milblogger Alexey Sukonkin:

Events in Pavlivka, however, continue to develop. Participants say that at present there is a dilemma: in order to withdraw exhausted units from Pavlivka, fresh ones must be brought in. There are no fresh units, no opportunity to withdraw and replace, because everything is under fire from Uhledar and other directions. And the enemy continues to methodically level Pavlova to the ground with artillery. What to do?
And this question should be asked to those who started this
bloody mess.

Here is video of Ukrainian infantry sweeping through the village during its recapture, likely clearing it of those trapped Russian marines:

(Ignore the “94 kilometers from Mariupol” thing, making it sound as if these were new Ukrainian gains. This had always been Ukrainian held territory.)

And here is visual evidence that Pavlivka is clear of Russian presence:

As a result of this slaughter, Pavlivka now has a new distinction—it is the graveyard of the 155th Naval Infantry Brigade of the Russian Pacific Fleet. Furious members of that unit have written this letter widely circulating through Russian Telegram.

Full letter from the soldiers of the 155th Marine Brigade of the Russian Pacific Fleet addressed to the Governor of Primorsky Krai:

“Dear Oleg Nikolaevich. The Marines of the 155th Marine Brigade are appeal to you. Once again, General Muradov and his fellow countryman Akhmedov threw us into an incomprehensible offensive in order for Muradov to earn bonuses from Gerasimov, and Muradov promised to Akhmedov the Hero of Russia award.

As a result, us and Kamchatka marines are advancing on Pavlivka. As a result of the “carefully” planned offensive by the “great commanders”, we lost about 300 people killed, wounded and missing in 4 days. 50 percent of vehicles. This is just our brigade. The command of the district, together with Akhmedov, hide this and replace the official figures of losses for fear of responsibility.

How are they planning to capture the settlement by slipping through the tree plantations in which the enemy remained, now destroying our guys on the wounded evacuation and ammunition supply routes? In addition, Pavlivka is lower than Uhledar, they’re striking us from the latter.

Oleg Nikolaevich, Primorye people! For how long will such mediocrities like Muradov and Akhmedov be planning military operations for the sake of their reports and receiving awards at the cost of the lives of so many people? They don’t care about anything but demonstrating themselves. They call people meat.

We ask you to turn to the Supreme Commander so that they would send a commission, not from the Ministry of Defense where Muradov is protected by Gerasimov, but an independent one. Let them be asked about the purpose of such actions, their supply, and the results, without any embellishment.

How long can we endure this?

300 killed, wounded, and missing! For context, a full-strength naval infantry brigade has around 2,000 men and at least a couple of hundred vehicles. There is zero chance this unit was at full strength. So whatever was left of it was utterly decimated.

It’s cute that they think anyone is interested in a “commission.” Russian military blogger Alexander Khodakovsky, with over 628,000 followers on Telegram, isn’t happy.

Still, eight years in the war and next to the war sharpen intuition and improve understanding of the military space – my fears about Pavlovka were not in vain. I am making a proposal: to keep the design of the star of the hero of the DPR for the Russian award series, and to hand it over in cases where the market situation requires it, but when the military leader has accomplished a “feat”, the “game” from which “manufacturing” is not worth it. For Pavlovka, just such a star – with a black stripe – should be awarded to the generator of this operation – as a sign of special distinction.

Everything is objectively bad in Pavlovka The first joy from the fact that the Donbass special forces of the OBTF and the Cascade went there was replaced by extremely depressing news about the situation of the 155th brigade of the Pacific Fleet. Khodakovsky openly runs into those who planned the operation (so far without names). A colleague and our military “father” Sladkov reports painful losses and the appeal of marines from the 155th to the leadership of the Moscow Region. We are waiting for specifics and organizational conclusions.

Pavlivka may explain, in large part, those gaudy Russian losses claimed by Ukraine in recent days. And given the fury in a Russian Telegram scene already under extreme pressure from Moscow censors, this may reverberate deeply inside Russian itself.