Thursday morning in Soledar. The soldier in this video insists that Ukrainian troops hold the town and that Russians have not captured Soledar.

The best of the worst of Russian propaganda on Thursday has to be the claim that citizens of Kharkiv—a city that had been battered by Russian missiles and artillery daily since the beginning of the invasion—were so thrilled to get the news about Russia’s capture of Soledar that they decided to celebrate Russia’s achievement with a fireworks display. This claim is repeated over and over on both Twitter and Telegram across hundreds of accounts and channels.

As twisted as that idea may be, it’s not as dark as the claims circulating on pro-Russian sites that 100, or 300, or 400, or maybe 1,000 Ukrainian soldiers were “trapped” in Soledar and decided to commit suicide. Yes, that’s also a thing the tankies are claiming this morning.

Because it’s been so long since Russia had anything that even looked like a marginal victory, pro-Russian sources are trying to turn Soledar into “proof” of every claim out of the Kremlin. Soledar has already been turned into a banner they can wave to show that everything is going according to plan. Those feints at Kyiv, Kharkiv, and Kherson? Bah. Only now is Russia seriously beginning to fight.

There’s a good reason for this propaganda flood: If Russia captures Soledar, it would be their first significant advance since July. If.

There’s no doubt that Ukraine is also attempting to paint the situation favorably. However, their motivations for exaggerating the ability of Ukrainian forces to withstand a large assault are certainly mixed. Would the loss of Soledar and increasing threat to Bakhmut make it more likely or less likely that modern main battle tanks roll into Ukraine in the next few weeks? Good question. Ukraine is not denying Russian gains in the area—Russia’s overrunning of the smaller Bakmutske was likely the most significant threat in the area for some months, as it displaced Ukraine from well-established defensive lines—and where Ukrainian forces can establish a position secure against what even Russians are calling “zerg assaults” isn’t clear. The answer may be “not in Soledar.” 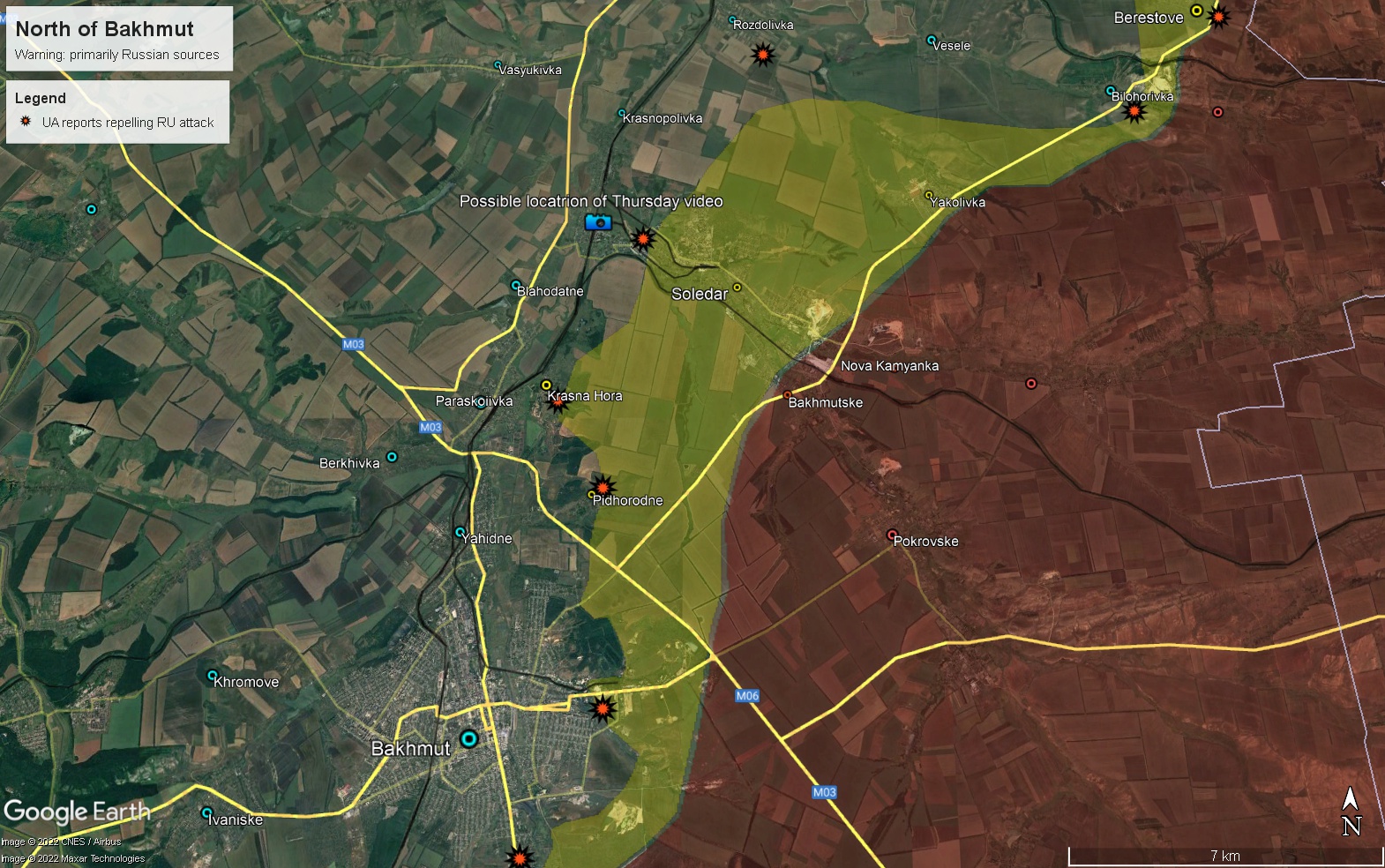 North of Bakhmut. Open image in another tab for a larger view.

By looking at the surrounding buildings, it would appear that video that appeared this morning showing Ukrainian forces still in the town was shot in the western part of Soledar. Each of the little explosion markers on today’s map doesn’t reflect shelling by Russian forces, but locations in which the Ukrainian army reported on Thursday morning that a Russian ground assault had been repelled.

Note that for Soledar, the UA report says nothing more than “Soledar,” so the position of that marker was pulled from my own … let’s say hat. In any case, I think it’s safe to say this morning that Ukraine still controls a portion of Soledar, that fighting in the town continues, and that losses have been significant on both sides.

One thing that Ukraine is emphasizing this morning is that they still hold control over the highways leading into both Bakhmut and Soledar. This would seem to indicate that any Russian penetration to the west has not crossed the rail line running north-south into Bakhmut and Russia is not currently threatening access along the T0513 highway.

The main roads connecting Bakhmut and Soledar with Sloviansk and Kostyantynivka are under the full control of the Ukrainian Armed Forces. The enemy tried to break through to the road, but all attempts failed with devastating consequences for the enemy. Filmed at Bakhmut. pic.twitter.com/LKra7WZNfO

To the south of Bakhmut, there has also been a flood of claims on Thursday stating that Wagner has taken the suburb of Optyne. However, as best I can determine, lines in that area haven’t actually moved. The Ukrainian military denies that Optyne has been captured by Russian forces.

What’s happening in Soledar at the moment is also unclear. Russia appears to be continuing to attempt movement, but Ukrainian videos don’t indicate Russia is engaging in anything that looks like a combined arms assault. Instead … zerg.

Update from Soledar by Magyar, commander of the separate tactical air reconnaissance group S.A.R.G active inside the town.

Wagners (just infantry, no armored vehicles to protect them are visible) trying to advance. pic.twitter.com/BJOxbRYvgL

The scene of that video actually appears to be a wooded area east of downtown Soledar. (On the map, it’s near where the “dot” for Soledar is located.) If this was actually shot on Thursday, then Russian forces are still having difficulty capturing the central portion of the town. However, as with everything else, it’s hard to be sure this video was actually shot. The snow on the ground is accurate to conditions in Soledar over the last two days.

Time to sum up. Has Russia captured all of Soledar? No. Will it be important if it does? Possibly. That depends on whether Ukraine is able to establish new positions that safeguard the highways leading to Bakhmut. Even if Russia is able to reach the T0513 highway, Ukraine will still be able to supply Bakhmut from the northwest along the M03, but it would represent a loss of flexibility and could be a threat to other locations north of Bakhmut.

While sifting through the morning reports from the Ukrainian Ministry of Defense listing those areas assaulted by Russia on Thursday morning, there is one that stands out. In fact, there are two big names making their first appearance. See if you can catch it:

Not to ruin the surprise, but one of the names in there is Kreminna. It also shows up on the list of areas where Ukraine claims to have repelled a Russian attack overnight. This follows reports on Wednesday that Ukrainian forces were advancing on Kreminna from the southwest. While some of those reports place Ukrainian forces “near” the western outskirts of the city, others indicate that the Ukrainian military has already entered areas of Kreminna.

The official statements from the Ukrainian military don’t really confirm this either way since they are always carefully worded as “in the direction of” or “in the area of.” However, the fact that the list includes Kuzmyne and Dibrova as well as Kreminna is a good indicator that the Ukrainian forces they’re talking about are not those at surrounding villages. There are numerous videos that reportedly show Ukrainian forces reportedly advancing on Kreminna; however, those videos are fairly strewn with bodies.

There have also been several versions of this video spread around. I’m using this one because it leaves off the ending in which both men in the video are shot with a burst of machine gun fire.

SHOCKING Outside #Kreminna Two Russian soldiers pretending to be Ukrainian. I have edited the video to remove the ending. Essentially it didn’t end well for the Russians. pic.twitter.com/qH5vvFi4OU

Pro-Russian sources are claiming that this shows Ukrainian forces in the woods south of Kreminna being overrun by Russian forces. However, Ukrainian sources are claiming that these men are Russians who have adopted Ukrainian uniforms. There are other reports that Russians in the area have adopted blue or yellow armbands to increase confusion—already high because of the low visibility among the trees. What’s the truth? I do not know.

In any case, Ukraine is apparently in or very near Kreminna with multiple reports of advancement. This is the first day that Kreminna has appeared in the “shelled” or “repulsed attack” lists—that’s significant.

But I promised you there were two names in that list that were significant, and the answer is right back at the very front of the list: Terny in Kharkiv Oblast. That’s because Terny is at the extreme northeast corner of Kharkiv Oblast. If Ukraine has forces there, it would represent an advance of some 15 km from their last known positions north of Kupyansk. So is this real, or does it represent some confusion on the part of Ukrainian military (or Russian artillery)? Stay turned. We’ll try to find out.

Here’s a drone drop that doesn’t end with anyone dying … it ends with someone getting some sugar for their morning coffee.