Steve Nash out as Brooklyn Nets coach after chaotic tenure 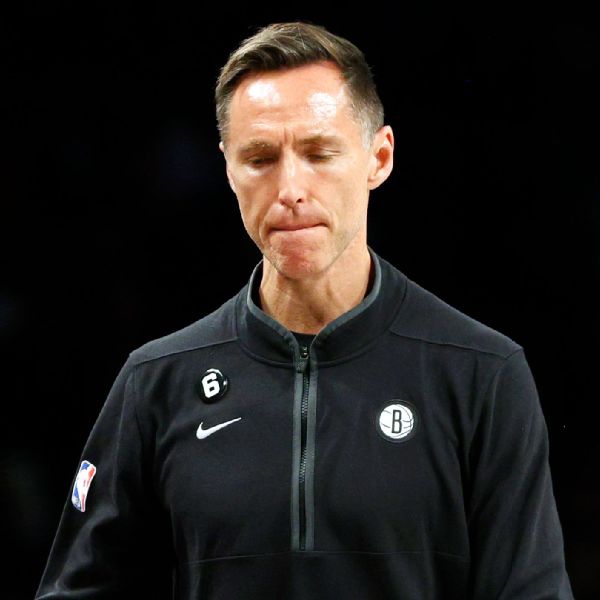 Steve Nash is out as head coach of the Brooklyn Nets, the team announced Tuesday.

The decision to part ways was mutual between the Nets and Nash, sources told ESPN’s Adrian Wojnarowski.

“We want to thank Steve for everything he brought to our franchise over the past two-plus seasons,” general manager Sean Marks said in a statement Tuesday. “Since becoming head coach, Steve was faced with a number of unprecedented challenges, and we are sincerely grateful for his leadership, patience and humility throughout his tenure. Personally, this was an immensely difficult decision; however, after much deliberation and evaluation of how the season has begun, we agreed that a change is necessary at this time.”

In a separate statement, Nash thanked Marks and team ownership for an “amazing experience with many challenges that I’m incredibly grateful for.”

Suspended Boston Celtics coach Ime Udoka has emerged as the likely next Nets head coach, and his hiring could be finalized as soon as the next 24 to 48 hours, sources told ESPN’s Adrian Wojnarowski. The Celtics would let Udoka leave for another job, sources said.

The hope is that Udoka can tighten the Nets defensively and command the respect of franchise’s key players. Udoka spent a season on Nash’s staff before accepting the Celtics job and winning the Eastern Conference. Udoka’s time in Boston was essentially over after being given a one-year suspension for having an improper workplace relationship with a female subordinate.

Assistant coach Jacque Vaughn will be the acting head coach for Tuesday night’s home game against the Chicago Bulls.

The move comes after a disappointing 2-5 start for Brooklyn.

A first-time head coach, Nash was hired by the Nets in 2020 to replace Kenny Atkinson a year after Kevin Durant and Kyrie Irving signed with the team.

While a squad led by a Hall of Fame former player who had previously worked with Durant in Golden State seemed like a recipe for success, the Nets never reached the lofty goals set for the team under Nash.

Brooklyn made the playoffs in each of Nash’s two full seasons, but only won one series. Injuries and mega-trades were constants during Nash’s tenure as the team acquired James Harden in the 2020-21 season and traded him last season in a move that brought in Ben Simmons. Simmons didn’t make his Nets debut until this season, while neither Durant nor Irving have played 60 games in a season since signing in Brooklyn due to injuries and, in Irving’s case, his decision to not get vaccinated against COVID-19.

This past offseason, the Nets dealt with trade requests from both Irving and Durant. A viable trade didn’t emerge for Irving. And in an August meeting with owner Joe Tsai in London, sources confirmed to ESPN that Durant asked Tsai to choose between him and the brain trust of Nash and Marks. While both men were retained and Durant eventually relented on his trade demand, Nash’s time in Brooklyn is now over.

In Nash’s first season, the Nets with Harden earned the No. 2 seed in the Eastern Conference, but injuries to Harden and Irving contributed to the team’s seven-game, second-round exit at the hands of the eventual champion Milwaukee Bucks.

Entering last season, the Nets were again expected to be one of the East’s best teams, but Harden was sent to Philadelphia and Irving was limited to just 29 regular-season games after choosing to not get vaccinated. Brooklyn was swept in the first round by Boston.