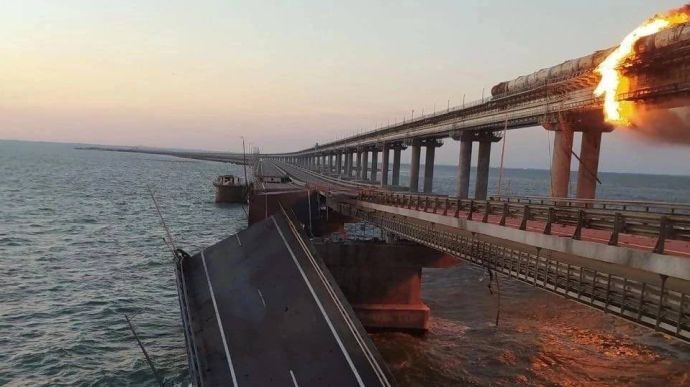 The Kerch Bridge, after the attack

The images of Ukraine’s attack on the Kerch bridge were dramatic. And while we still don’t know how Ukraine managed it (truck bomb has actually emerged as the most plausible explanation, even if the details don’t quite fit right), Russia has thrown all caution to the wind. It started limited automobile traffic through the single remaining lane, no matter how warped the roadway might look, and claimed to resume rail service, despite having its concrete and steel cook at extreme high temperatures for hours.

(The ATAMCS theory is not persuasive to me for various reasons, including the size of the explosion. But the best argument against ATACMS is simple—that bridge isn’t looking too healthy. if Ukraine had ATACMS, they’d finish the job.)

The Kerch bridge is a major strategic asset for Russia, supplying their war effort in the entire southern front and Crimea. That notion is not controversial.

The Geneva Conventions, which regulate the international rules of war, allows for targeting of civilian infrastructure (like bridges) that serve additional military purposes.

2. Attacks shall be limited strictly to military objectives. In so far as objects are concerned, military objectives are limited to those objects which by their nature, location, purpose or use make an effective contribution to military action and whose total or partial destruction, capture or neutralization, in the circumstances ruling at the time, offers a definite military advantage.

The Geneva Convention’s “commentaries” (which provide the authoritative interpretation of the articles) further specify the differences between military targets that are inherently fair game (weapons, fortifications, military vehicles), civilian targets that are off limits (like the apartment complexes and bus stops Russia targets nightly), and civilian infrastructure with valid military applications.

Clearly, there are objects which by their nature have no military function but which, by virtue of their location, make an effective contribution to military action. This may be, for example, a bridge or other construction, or it could also be, as mentioned above, (13) a site which is of special importance for military operations in view of its location […] [Emphasis mine]

The commentaries also include an explicit list of targets allowed in war, and includes:

(6) Those of the lines and means of communication (railway lines, roads, bridges, tunnels and canals) which are of fundamental military importance.

Again, this isn’t controversial. No one would argue that a bridge used to supply an army isn’t of the upmost importance. In fact, this entire war we’ve been talking about bridges being blown throughout Ukraine.

But a lack of controversy hasn’t prevented the Tankies from having a conniption at Ukraine’s “terrorism.” Chief amongst them is Michael Tracey, the same asshole who harassed Ukrainian refugees at the start of the war and accused them of “calling for World War III.”  Did any refugee actually say they wanted nuclear war? Of course not. He was pointing at those asking for a NATO no-fly zone over Ukraine, “what I can report thus far is that with the exception of just one person, every recently-arrived Ukrainian I’ve spoken to in Poland has expressed strong support for ‘Closing the Sky’ when queried.”

We could and did have a debate about the efficacy of such a no-fly zone, and as I argued at the time, it was impossible to implement without declaring full-scale war against Russia. But there was a way to have that difficult debate without literally harassing desperate refugees in fear of their lives and those of their loved ones still in Ukraine, and then putting ridiculous words in their mouths. Tracey is an execrable piece of shit.

But that’s Tracey for you, most recently seen as arguing that the Holocaust was America’s fault. 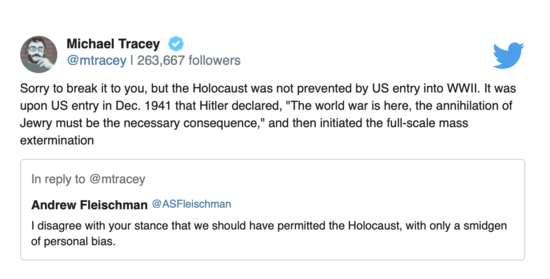 He dug in for days. 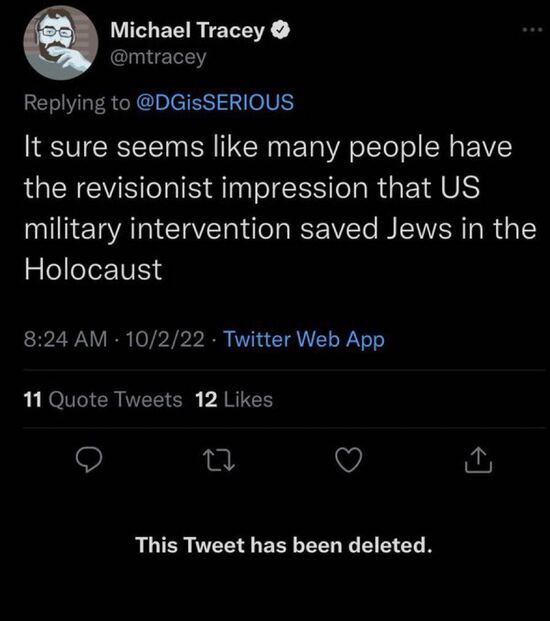 Remember, the Tankies are people who believe imperialism is bad, and only the United States can be imperialist. Also, all of the world’s ills are the fault of said American imperialism. Like the Nazis. In WWII. When the U.S. had to be dragged into the war kicking and screaming. They murdered millions in mass genocide? America’s fault. That Hitler chap had no choice!

Seeing that, it’s clear how they can believe that Vladimir Putin’s invasion of Ukraine truly was America’s fault. No one has agency except the U.S., relegated to Pavlovian reactions to its evil, colonialist schemings. It looks like this: 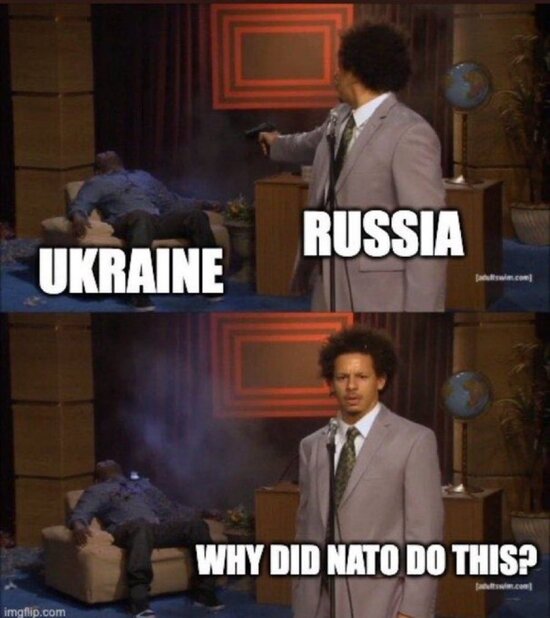 So of course, Ukraine’s Kerch bridge attack wasn’t a valid military strike against Russia’s most important logistical target. All of a sudden, civilian lives are the most important thing ever, because it’s Russian lives.

Classic mark of a terror bombing, deliberately intended to inflict terror on civilians, not achieve any discernible “military” objective https://t.co/6BRI3iIi5f

There is an ongoing debate—is Tracey a disingenuous liar, or just the dumbest man alive? He knows the bridge is used to transport weapons and war supplies. People put the videos in his replies, and he clearly reads them as he replies to many. He sees people point out his own double standard: 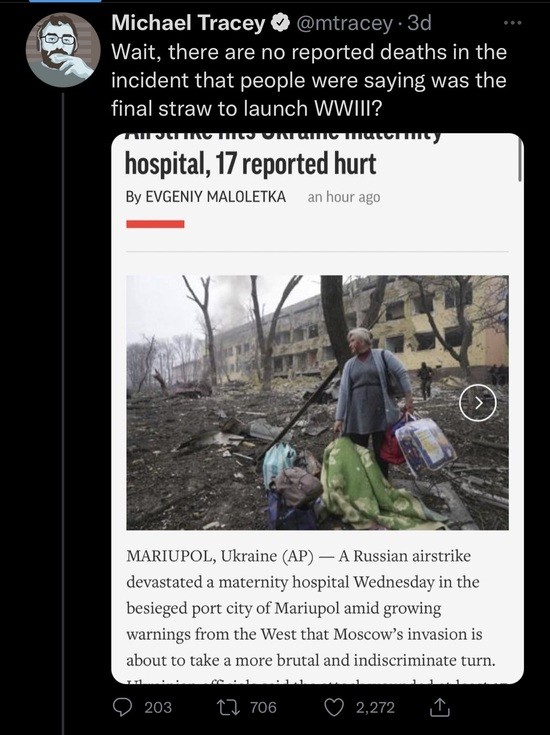 This is someone who nearly faints when Ukraine defends itself, while ignoring Russia’s daily attacks on civilian infrastructure:

Another russian missile strike on the city of Zaporizhzhia. 17 civilians were killed.
If #UAarmy had modern Western anti-missile systems, we could have prevented such tragedies. pic.twitter.com/6mTHlFshF9

Ironically, none of these Tankies, with their worship of Russia and China and their fantasy “multi-polar world” actually want to live in those countries. Funny, also, how refugees risk so much to reach the West, as opposed to Chinese or Russian borders. For those forced to live under despotic regimes or failed states, the choice always seems to be clear.

On the ground, there’s been some marginal progress on both the Kherson and Luhansk (formerly Kharkiv) fronts. Nothing major, looks like positional battles as Russia desperately digs in, and Ukraine prepares for whatever the next phase is.

Kherson
Nova Kam’yanka liberated. Possible some slow progress. I would not be surprised if we saw an offensive from the AFU in a different area if RuAF manages to stabilize this frontline. pic.twitter.com/MjCuKyLKv8

And how could I forget this? 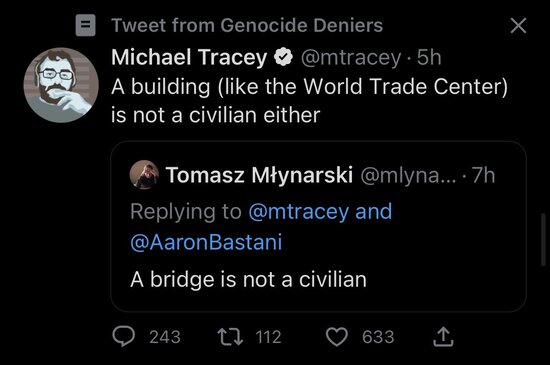 And speaking of Tankies, this one is the most unironic self-own I have ever seen:

The NAFO trolls are trying to mock me with this thread.

For the record: I stand behind this prediction about the timing of Russia’s invasion 100%.

The fact that people claim I denied Russia would invade Ukraine just shows you how dishonest my critics are. https://t.co/yZ7LxmZxHv

You are not reading that wrong.

Clint: “The fact that people claim I denied Russia would invade Ukraine just shows you how dishonest my critics are” and here’s a link that proves it.

Link: “I’ll put my reputation on the line: There is now zero chance that Russia suddenly invades Ukraine.”

Multiple sources are reporting this:

Ihor Yosypenko, a member of Kherson Regional Council, claims that Russians destroyed the bridge over the Sofiyivska Balka near the village of Mylove pic.twitter.com/ZDMiZo2Jxj

Back to reality, if Russians are blowing bridges over here, it means they’re expecting to retreat even further back toward Nova Kakhovka and Kherson city in the near future.

After an eruption of even more scandals among Republican Senate candidates, FiveThirtyEight’s Nathaniel Rakich returns to The Downballot this week to discuss the effect these sorts of scandals can have on competitive races; whether Democrats stand a chance to keep the House; and the different ways pollsters create likely voter models.