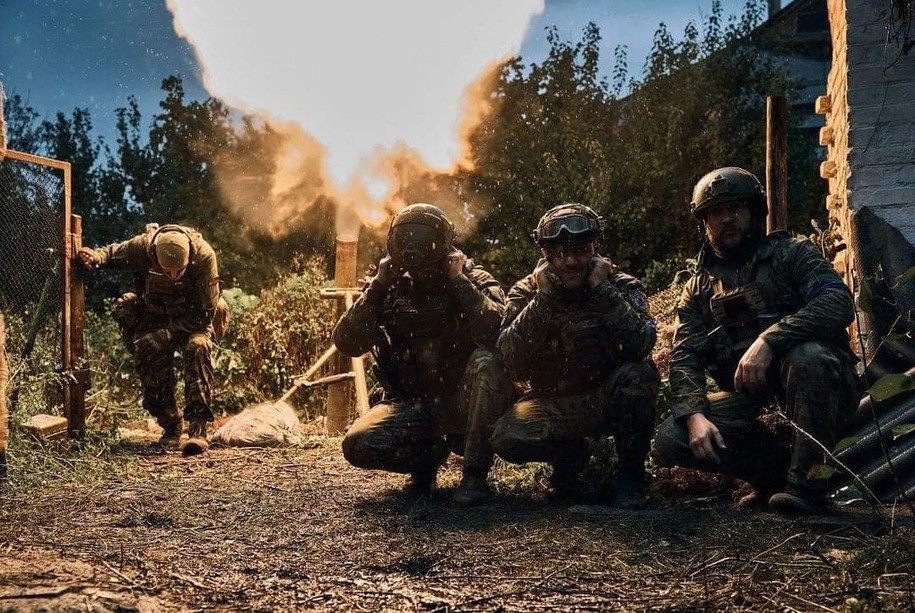 On Saturday morning, local time, just before dawn when the bridge was at its emptiest, Ukraine somehow struck the Kerch bridge on occupied Crimea. The bridge is a key logistical strategic asset for Russia, supplying its entire southern war effort. As I explained yesterday, it is a legitimate target under the Geneva Conventions, the rules of war.

Russian dictator Vladimir Putin hesitated a day before he announced that, “There is no doubt, this is an act of terrorism aimed at destroying Russia’s critical civilian infrastructure.” Of course, there was plenty of doubt, as the bridge is the military infrastructure of the entire southern region. And if he wanted to see what an actual terrorist attacks looks like, all he needed to do was look in a mirror.

Another russian missile strike on the city of Zaporizhzhia. 17 civilians were killed.
If #UAarmy had modern Western anti-missile systems, we could have prevented such tragedies. pic.twitter.com/6mTHlFshF9

In addition to striking civilian apartment complexes in Kyiv last night, it struck a busy intersection during rush hour traffic as to maximize civilian casualties.

[Edit: The video above is actually from Dnipro, not Kyiv.]

A Russian rocket slammed into a busy intersection right in central Kyiv Monday morning, incinerating at least six cars. One body, covered in a foil blanket, was still in the street. I heard a paramedic say there were 13 casualties. pic.twitter.com/oGeL2dC93r

And for those who say that Russia is “retaliating” for the Kerch bridge attack, 1) retaliation would be hitting a bridge or rail station Ukraine uses to move its equipment, and 2) Russia has been hitting Ukrainian civilian infrastructure literally every single day since February 24. Even playgrounds, in the morning, when kids might’ve been playing there (thank heavens for air raid sirens).

Another missile was wasted on a pedestrian bridge in Kyiv, because that was somehow considered an important target.

This was Russia’s largest coordinated missile strike of the war.

The silver lining to Russia’s murderous terrorirsm, and it’s a shitty one but real, is that every munition expended against a civilian target is one less munition used against the Ukrainian armed forces that are, at this moment, pushing Russia back all across Ukraine.

There are lots of reasons Russia is losing this war, and amongst them, the unimaginably cruel prioritization of civilian targets over military ones. Russia has a limited number of long-range precision-guided missiles and rockets. Using up the last ones to take out playgrounds, rather than HIMARS or other high-value targets, only hastens the end of the war.

Rushing to publish this now. I’ll update with on-the-ground situation in a bit.

All war I’ve been dismissing pervasive reports of Belarus joining the war. So what to make of this?

Breaking: Belarus president Alexander Lukashenko and Vladimir Putin agreed to deploy a joint regional group of troops. Belarus allowed Russia to use its territory as staging ground but claimed it’s not sending troops. May change now.

It would be bizarre for Lukashenko to enter the war now, when all is lost. we’ve also seen ancient Belorussian tanks headed east, to Russia. So even if Belarus enters the war, doesn’t look like they’d be opening up a new front on their border with Ukraine. It’s all very weird, actually. Lukashenko has done a great job keeping Putin waiting, what would’ve changed now?

I’m still guessing Belarus doesn’t formerly enter the war. Lukashenko’s standing in the country remains precarious, and we’ve seen repeated signs his army had zero interest in engaging. If you thought Russia’s army was a paper tiger, Belorussia’s will be even worse. But for the first time, there’s a real chance it may happen, even if in this limited “joint regional group” format, whatever that means.

The Rybar in English Twitter account helpfully translates dispatches from the pro-Russian Rybar Telegram. They are celebrating their terrorism:

As we’ve written before, to create a prolonged panic among the population, to lower the morale and psychological state of the AFU and to win on the battlefield, such actions must be repeated. To prevent the enemy from recovering and restoring damaged critical infrastructure.

They really think mass murder will lower Ukraine’s will to fight, learning nothing from the Battles of Britain, Stalingrad, Dresden, and other efforts to break a population’s will be destroying civilian infrastructure.

Rybar on the Belarus news.

Even if a joint regional grouping of Russian and Belarusian forces is deployed just to cover the state border, it will still require Kyiv to draw down a significant part of its reserves to the Belarusian direction.
(FWD from Yuzhny Veter)

They don’t think territorial defense can handle this new grouping, which is a weird declaration given that we have no information on what these forces are. The border with Belarus doesn’t look now like it did in February 24. It is now well fortified, and defended with battle-hardened Territorial Defense Forces. Ukraine has far better artillery assets than it did when the war begun. And if this move was truly intended to put pressure on Ukraine’s northern border and “fix” military assets in place, decrepit Belorussian tanks wouldn’t be seen shipped towards Russia. Funny enough, this dispatch makes me think the announcement is pure bullshit, attempting to scare Ukraine into moving reserves to their northern border. I’m back on the “not gonna happen” train.

I was going to update the ground situation, but the fog of war is thick. There are purported Ukrainian advances in both the Luhansk (formerly Kharkiv) direction, as well Kherson. But I can’t get a grasp of what is real, what is rumor, and what is wishful thinking. I am going to see if we get more clarity by this evening and either update this post, or write something new (if warranted). After a relatively quiet week (as Ukrainian forces rotated out, rested, refitted, and resupplied), the intensity of the fighting is definitely amping up.

Complete annihilation of a Russian convoy and multiple other vehicles including IFVs, tanks, transport trucks , MLRS (BM-21 Grads and BM-30 Smerch) in the South front of Ukraine. Costly lost… pic.twitter.com/EoQ9S4WoJY

Each Excalibur round costs around $100,000, but no need to spray and pray. Nearly each round is money. And if you wonder if it’s worth spending a $100,000 round on a supply truck, note Russia’s biggest liability is logistics. Both the vehicle, the drivers, and the cargo are precious to Russia (especially ones supplying artillery, which is what we see in this video, along with their GRAD rocket launchers). Each loss is a hit on their ability to wage war. As a result, Russia has lost the ability to go on the offensive. Now, their ability to defend is being degraded.

What makes it even harder:
RU is not aiming at “critical infrastructure” or “military targets,” (which, in an area like Ukraine would require literally hundreds of ADA systems), RU is striking random civilian targets – to include playgrounds! – all over the country. 11/ pic.twitter.com/lvp9mUJHjn

Read the full thread for the full explanation.

1/ Finland’s national broadcaster Yle has published an interesting interview with an explosive ordnance disposal expert, retired Major Myka Tyry of the Finnish Defence Forces, on the Crimea Bridge blast. He makes a number of points I’ve not seen elsewhere. pic.twitter.com/muLzDxUAhl

This guy has an interesting theory. Russia has been using thermite munitions in its attacks on villages on the Donbas front. He buys into the truck bomb theory and sees evidence that Ukraine used captured thermite munitions in its bomb, hence the sparkly metallic burning we see in videos of the explosion. Those would spread the damage, and would’ve been the reason the fuel train caught fire.

After an eruption of even more scandals among Republican Senate candidates, FiveThirtyEight’s Nathaniel Rakich returns to The Downballot this week to discuss the effect these sorts of scandals can have on competitive races; whether Democrats stand a chance to keep the House; and the different ways pollsters create likely voter models.

Do the math in that thread, and looks like the most Belarus could mobilize, if it chose to do so (and they haven’t), would be 40,000 men. As of now, they have around 20,000, none well trained, and sporting ancient Soviet gear.

I spoke of this above.

❗️Lukashenka started handing over tanks removed from storage to Russia – they are being sent to Donbas.
Yesterday we wrote that an echelon with tanks was seen at Orsha railway station (Vitsebsk region) moving towards Russia.
1/7 pic.twitter.com/lVfheBVPTs

This shipment of shit old equipment to Russia is completely incompatible with the notion that Russia and Belarus are opening a new front in northern Ukraine.