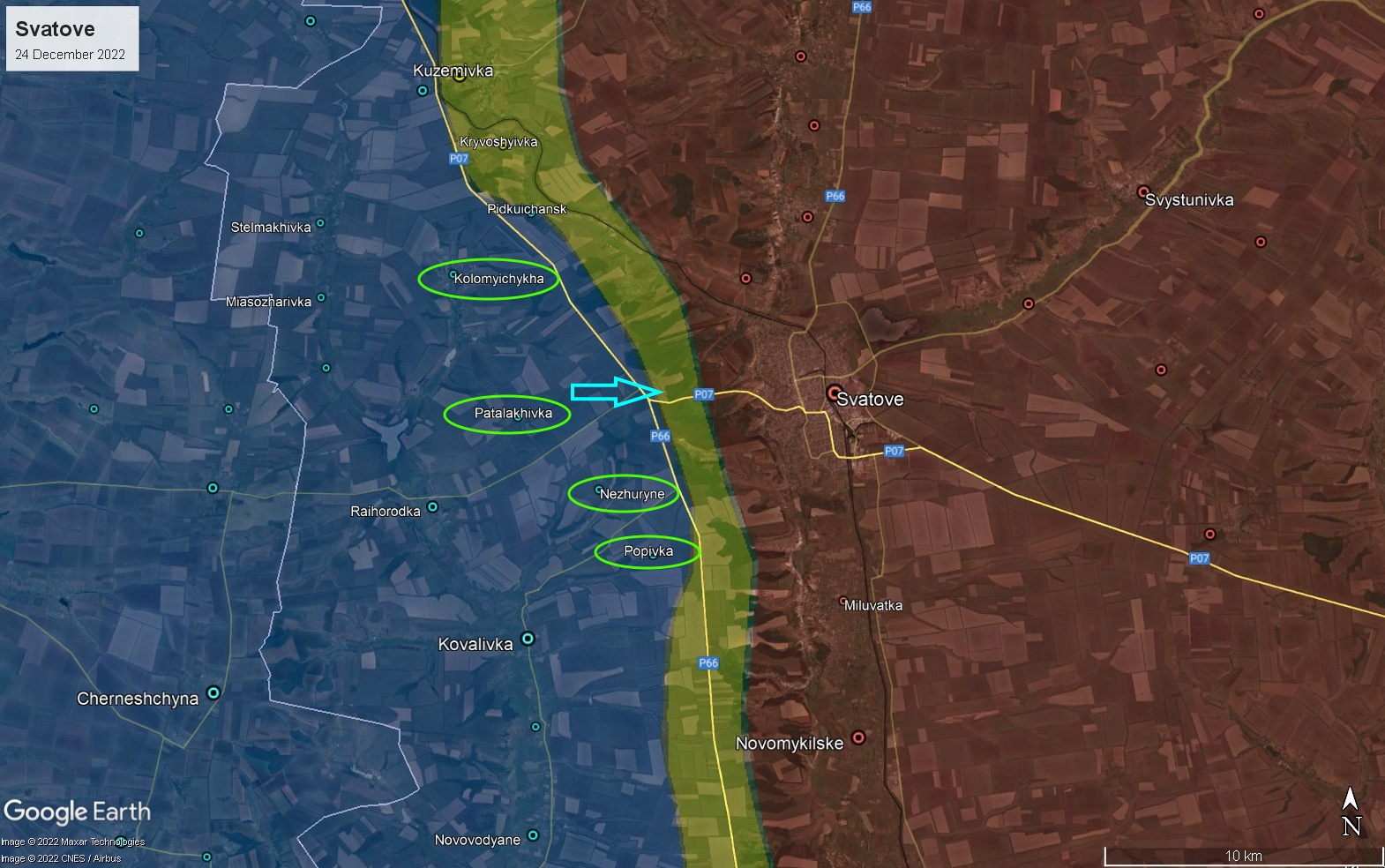 Svatove Area. Open in another tab for a larger view.

On Thursday, there were reports that Ukraine has broken through Russian lines at the small village of Pidkuichansk, 12km northwest of Svatove. This location put Ukrainian forces across the vital P07 highway at a position south of where Russia had been holding up their advance at Kuzemivka. On the following day, there was word that Russian forces still in Svatove had been rushed to the front lines in an attempt to stop this breakthrough. Russian forces also reported mounted a counterstrike of their own, moving from the village of Kolomyichykha toward Stelmakhivka in an effort to cut off the Ukranian forces.

None of that seemed to have worked. Because now Ukraine is reported to have liberated a whole string of villages, essentially eliminating the area of Russian occupation west of the highway and giving Ukraine control over the critical highway junction west of Svatove.

To the south, where Ukraine had already reached the village of Popivka some weeks ago, it has reportedly now taken the neighboring village of Nezhuryne. Both of those locations were under shelling from Russian artillery across the highway on Saturday morning.

North of that location, Ukrainian forces pressed east from Raihorodka. Russian forces in the village of Patalakhivka reportedly abandoned their location, fleeing toward Svatove without a fight.

And finally, Ukraine flipped the script on Kolomyichykha, moving on that location from three directions and reportedly liberating the last of the Russian-occupied villages in the area.

This now leaves the Russian forces at Kuzemivka to the north with a single supply line to the northeast. That would also be their single line of retreat. With Ukraine in possession of positions north and south of Kuzemivka, and very close to occupying the high ground west of Svatove, it’s not clear that Kuzemivka — which Russia reinforced over and over — remains of tactical value. There are reports on Saturday morning that Ukraine may have already moved into this location. If so, then the entire highway from Kupyansk to the P07 / P66 junction is in Ukrainian control (though Russia still has sections of that road under fire control).

All of this is currently unconfirmed. However, reports seem consistent.

What’s going on in Kuzemivka at the moment is very uncertain. Both Ukraine and Russia are reporting the town as shelled by the other side, and there are still reports of Russian troops in the area. Reports that Ukraine has already liberated this area may be correct, but they seem premature. No update on the village of Kryvoshyivka.

At both Svatove and Kreminna, Ukrainian forces have reportedly been slowed because Russia heavily mined both roads and surrounding fields. So it seems likely that Ukrainian progress will be hampered by the need for mine removal. But after a period when nothing seemed to be happening fast … things are happening fast.