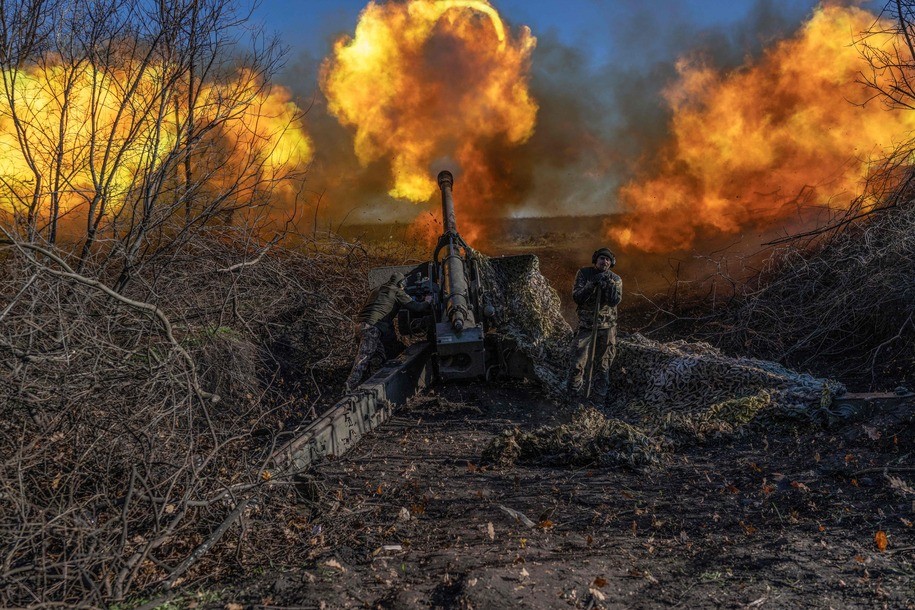 A Ukrainian soldier fires towards Russian positions outside Bakhmut, Nov. 8, 2022.

The C-RAM stands for Counter-Rocket / Artillery / Mortar. As in, it’s against all of those things. It consists of a computer assisted M61A1 20 mm Gatling gun with a 4,500 rounds per minute rate of fire. It’s basically the Phalanx System from a U.S. Navy destroyer mounted on semi-truck trailer. It’s so effective that the average period of fire for taking out missiles or incoming shells in tests is about 0.07 seconds.

And yes, it will probably shred any drone in existence, though don’t expect the military to add another letter. It would screw up the acronym.

A thread on why it’s important for Ukraine to have long range weapons that can hit targets well behind the front lines in occupied territories.

Using the example of the Chaplynka base, I would like to address some critical issues that need to be resolved – if we want to see the victory of the civilized world in this war. I will provide facts and evidence about lost opportunities pic.twitter.com/c6ixELhSAC

Over the weekend, Daily Kos published the first part of the Field Guild to Drones of Ukraine. That portion of the guide was aimed (mostly) at drones that mimic the design of traditional airplanes, with a pair of larger wings up front and smaller control surfaces at the tail.

But there was at least one drone that has wings front and back, which is becoming increasingly important in this invasion. It’s cheap, it’s effective, and it’s increasingly demonstrating that a small drone can outrange artillery and provide an alternative to counterbattery fire that might otherwise be provided by something like HIMARS. And unfortunately, this drone belongs to Russia.

In some ways, the Zala Lancet is similar to other kamikaze drones (i.e., loitering munitions) at use in Ukraine. Like an American-made Switchblade, it’s small enough (just 12 kilograms) to be carried to near the front lines and can be launched without a runway or complex launching system. When compared to larger drones, it has a relatively short range (40 kilometers) but that range is right in the mix of that delivered by many artillery weapons, meaning that the Lancet has been showing up more and more often in artillery duels. It was first introduced over the summer, and has only recently reached the battlefield in numbers, but it’s already doing damage that suggests that a big change is coming from the weapon that Russia has long held as the “king of the battlefield.” 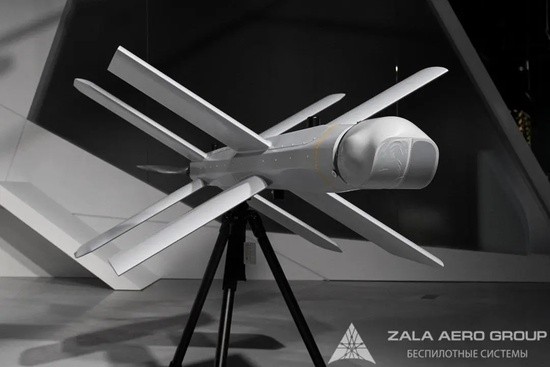 The Lancet-3 from Zala is a propeller-driven missile.

Even though it does have wings, that doesn’t actually mean the Lancet is a mini-plane. In fact, it’s something completely different: It’s a propeller-driven missile. Those four pairs of wings aren’t really there to provide much in the way of lift, they’re for giving the Lancet precise steering and the stability it needs to complete an arc from takeoff point to target. Though this drone was reportedly developed from the KYB Kub flying wing drone that Russia used in Syria, it’s discarded almost everything about that design, creating a drone that is very much just a smart artillery shell.

In addition to the reported 40km range, the Lancet carries a 3kg high explosive anti-armor warhead. It’s effective enough to take out a tank (and there are videos of this happening), but it’s proven particularly effective in going after artillery, anti-aircraft, and radar installations. They’ve also proven difficult to shoot down. Russia calls them “impossible to intercept.” That’s not true because Ukraine has taken down at least one. But that’s one, and these things are becoming an all-too-common part of Russia’s battlefield mix. If the Lancet has the ability to lock on to a target at altitude and self-steer into that target without further communication (as does the Switchblade), that could help to make it immune to some e-warfare and anti-drone weapons. Its flight path may also make it more difficult to track and take down with traditional anti-aircraft fire.

Compared to the Switchblade 300, the Lancet has a much longer range, a much larger warhead, and is far more effective at playing a role in locations where the battlefield has turned into a somewhat static artillery face-off. The Switchblade 600 has an identical range and warhead size and might be expected to play a similar role, but (as of the end of October) that long-promised drone has not shown up in Ukraine.

There are two things that Ukraine might field right now that provide an equivalent punch. One is the UJ-32 Lastivka, a drone that borrows the warhead from a RPG-7 anti-tank missile. It has a similar range and should have roughly the same impact. It’s unclear how many have been made as none have been recorded as lost. The other is, potentially, the Phoenix Ghost. The one (count ‘em) video available that’s actually identified as a Phoenix Ghost strike is on a 82 millimeter motor, which has a range of only about 3 to 5km, so it’s impossible to tell if the Ghost really has the range or impact to play this roll. However, the U.S. just sent Ukraine 700 more of these drones, which are rumored to carry the same warhead as a Javelin anti-armor weapon. So hopefully they can at least match the Lancet.

However, right now, the Lancet-3 is having an impact on Ukraine, one that is probably limited only by Russia’s ability to produce the drone in large quantities. A large number of these drones could easily have more impact on the disposition of artillery than man-portable anti-armor weapons have had on the utilization of tanks.

The kamikaze drone is the most rapidly diversifying and improving category of drone in Ukraine. Staying ahead in this game is going to take some fast responses.

On Tuesday, Russian media and pro-Russian military sites are happily passing around images of a Ukrainian T64 tank burning in a field.

But the thing they’re not saying too loudly is exactly how close to Kreminna this tank actually was. That may be because the damaged T-64 has been location to a position less than 10km northwest of the city. Rather than signaling some failure on Ukraine’s part, the location of this loss (which may be a few days old) shows that fighting is getting very close to Kreminna even as Ukraine continues to press Svatove to the north.

In addition to fighting north and west of Kreminna—which is reportedly continuing with high intensity on Tuesday—Ukrainian troops have reportedly pushed back Russian forces that had reached the outskirts of Bilohorivka, meaning that town continues to be fully liberated and in Ukrainian control.

Remember that time you turned a trash can lid into a shield … when you were 12? Russian military geniuses do.

What’s happening in Kherson just gets more puzzling by the day. Ukrainian forces are reportedly continuing to probe around Snihurivka, Mylove, and Bruskynske, looking for signs of weakness on the Russian front lines. Meanwhile, those lines seem increasingly like a hollow shell.

In addition to “dragon’s teeth” being set up around portions of Luhansk—and across the Russian border near Belgorod—it appears Russian forces are now throwing up defenses in the area of Mariupol. All of these, including the way these pyramids are not attached to anything, meaning that they would not stop an anemic 1962 Volkswagen Beetle, are genuinely bizarre.