The tank isn’t dead, but the helicopter… 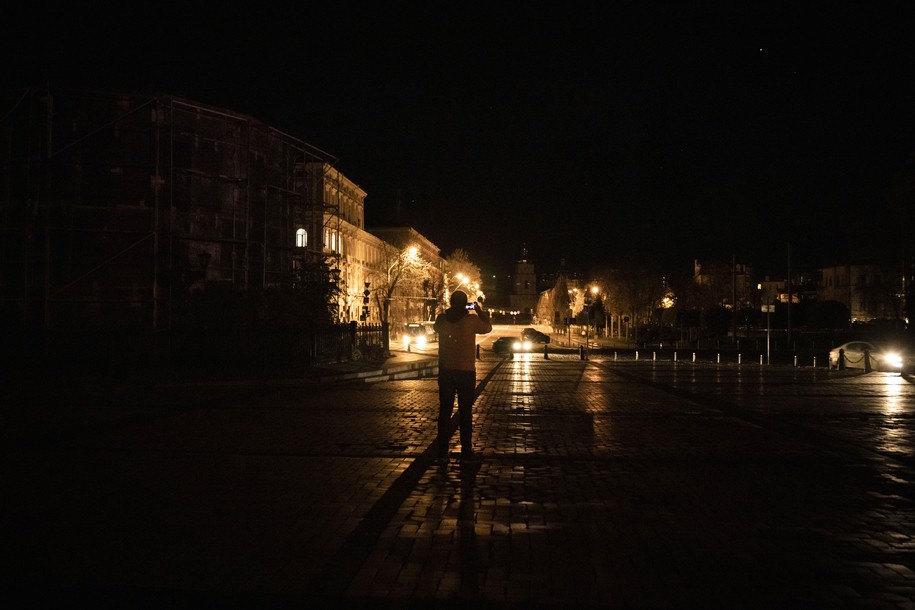 A man stands in a darkened Kyiv after Russia’s latest round of missiles aimed at civilian infrastructure. October 31, 2022.

On Halloween, Russia lost three helicopters. Minimum. That included an Mi-8 transport helicopter shot down near Berestove, close to the Bakhmut front lines and a pair of Ka-52 attack helicopters that came too near Ukrainian positions in Kherson oblast. In addition, a widely-circulated video reportedly shows a Russian dissident sabotaging Russian helicopters at Veretye Air Base inside Russia on October 30. At that air base, three helicopters were reportedly lost on Monday.

On average, the Russian air force has lost one helicopter a day, every day, since the invasion began. A few of those losses are difficult to confirm as, unlike a tank or artillery piece, a damaged helicopter may make it back across lines of control before it actually goes down. In addition, the wreckage on the ground of an aircraft may be so complete, that it’s difficult to tell one from another. Oryx has confirmed 57 Russian helicopter losses, but the 257 downed helicopters number from the Ukrainian ministry of defense is completely believable. For comparison, the U.S. and its allies lost 118 helicopters over the course of the war in Afghanistan, but most of those were maintenance and operational issues over the long course of that conflict. Only 35 were brought down due to enemy fire.

Russia’s loss in Ukraine so far represents roughly $3.8B worth of helicopters. It’s also likely to be more than 200 trained helicopter pilots along with an unknown number of crew and passengers. At this point, Russia is utterly incapable of replacing either the lost machinery or the centuries of lost flying experience.

While there’s been a lot of discussion about Russia rolling out older tanks and transports as a sign of how deeply Russia was dipping into dusty Soviet storage lockers to pad out its declining fortunes in Ukraine, there’s not been much of a look at what’s going on in Ukraine when it comes to helicopters. During this invasion, Russia lost Mi-8 and Mi-2 transport helicopters, along with Mi-24P, Mi-35M, Mi-28, and Ka-25 attack helicopters. Which of these is new and nifty?

In a way, the answer is none of them. Though there are two that are newish.

The Mi-8 went into production in 1961. It’s regarded as a solid design, and many thousands of them have been made, but the basic airframe hasn’t changed since before the end of the war in Vietnam. It’s not surprising that these helicopters also make up the majority of losses on the Ukrainian side. Mi-8s are just absolutely ubiquitous across the former Soviet Union and beyond. While they are an old design, they are still being produced in limited numbers today, chiefly licensed versions produced outside Russia with updated engines and electronics.

That “still being produced” can’t be said about the Mi-2. It was one of the first helicopters produced for the Soviet Union, with all known editions rolling from a factory in Poland that ceased operation along with that Union. The Soviets apparently liked it, because better than 5,000 were made, but they were all pretty darn similar to the first ones that rolled out in 1965. They’re still used as training helicopters and for search and rescue in other countries. Russia is still using them in Ukraine, where at least three have been captured, and two shot down.

The Ka-25 “Alligator” attack chopper is also a pretty creaky design, taking its first flight in 1963 and entering service two years later. What’s more, the production of these helicopters stopped in 1977. That would be the year I graduated high school, so you know these things are old. Presumably, someone has gotten in there and tinkered with the gear over the many, many years since they last rolled out. Or maybe not, since they just keep going down.

#Ukraine: Previously unseen footage of the remains of a Russian Ka-52 attack helicopter shot down by Ukrainian forces. This may be new, but is difficult to tell if this is the case.
pic.twitter.com/GmfHRj22Lo

Those who were around back in the dusty days of yore might better remember the Mi-24 as the “Hind.” It was a feared helicopter gunship in its day, and speculating about Russia screaming across Germany with a wave of Hinds was right up there with pondering how many tanks might come through the Fulda Gap. In fact, it was such a respected and fretted-over design that when the Soviet Union fell, the U.S. moved quickly to acquire its own set of Mi-24s, which are still used in training today. The Hind spread around the world to the point where it’s easier to say who doesn’t fly this helicopter in some form. It’s a 1960s design, but it’s regarded as a tough and proven one (which hasn’t stopped both Russia and Ukraine from losing examples in this war).

The Mi-28 is one of the last Soviet designs, and it actually didn’t go into service until after both the wall and the Soviet empire were rubble. Designed in the 1970s, first flown in the 1980s, the “Havoc” didn’t actually hit production until 2009. In a lot of ways, the Havoc seems like a clone of the American Apache. In a lot of ways. Though both of them date to the same era of design and first flight, so … good espionage on someone’s part. Variants on the Apache are still being made, and in fact, new ones are still being introduced. That also seems to be the case with this design. Russia likely started this war with fewer than 200 of them. Possibly fewer than 100. They’ve been a much rarer sight above the battlefield than either the Mi-8 or Ka-25, but at least six of them have been shot down.

The Mi-35 (also known as the Mi-24V) is the official replacement for the older Mi-24 “Hind.” It’s still based on the same airframe design, but with significant upgrades: short wings, a new rotor design, better engines, and new electronics. Even with the old design elements, it can be regarded as the first, and only, new helicopter produced by the Russian Federation. Russia also reportedly put some armor around the pilot on this one. Which must be nice. Like the original Hind, it can carry a small number of troops (6 or 8, depending on configuration) as well as a load of anti-tank missiles and a turret gun. It’s theoretically formidable, but at least five of these now lay smashed on the Ukrainian countryside. Russia was thought to have produced around 50 of these, in total.

In terms of ground units, consider the Mi-24 Hind as the T-72 of attack helicopters. They were well-regarded in their day, and quite a few were built. What Russia still has in operating condition, and to what degree the ones reaching Ukraine have been upgraded, isn’t really clear. But the quality of Mi-24s being flown, and the experience of the pilots doing the flying, is almost certainly decreasing day by day.

In a pinch, Russia could likely roll out something when it comes to a new helicopter, but the newest versions of all these craft are heavily, heavily dependent on their electronics, not just for fire control, but even flight mechanics. It’s unlikely Russia will find the necessary chipsets by cannibalizing washing machines.

Just as with that Mi-35 in the video above, Ukraine knows what it takes to keep a helicopter alive on the modern battlefield — flying at as close to zero elevation as possible. Why are both the Russian and Ukrainian helicopters skimming above cars on the highway? Because it’s the one place they can be pretty sure of not encountering trees or telephone lines.

For those who missed our videos with helicopters, here is a new one. A 5-meter altitude flight makes it impossible for the enemy’s anti-aircraft defense to shoot down our “dragonflies”. pic.twitter.com/evkNeO1ZHp

The ability to fly “on the deck” keeps helicopters alive in a battlefield rife with portable anti-aircraft weapons, but it also means their ability to carry out reconnaissance is highly limited. That Mi-8 that went down Monday near Berestove also gives a pretty good idea of how not capable helicopters as a means of getting troops to the front line in these conditions.

Early in this invasion, as Russia racked up loss after loss, the question that some military strategists had been asking for decades came up again: Is the tank dead? The answer to that is a decided no. What’s dead, and will remain that way, is using tanks as a solo tool, unsupported by infantry and not coordinated into a larger action.

Yes, Russia and Ukraine are both still using, and losing, helicopters. In Russia’s case, those losses are happening daily. However, it’s not exactly clear what value helicopters are contributing that makes them worth the cost and risk. There are definitely special circumstances in which helicopters have done work that is absolutely spectacular (i.e. that night raid into Belgorod were a pair of Ukrainian helicopters flew at tree-top level more than 30 miles into Russia, took out a Russian fuel depot, and returned). But increasingly, it’s hard to see how even those special tasks couldn’t be performed — and perhaps, better performed — by drones or precision-guided ammunition.

The idea of swarms of helicopters ferrying infantry to the front lines might have made sense when the people at the front weren’t carrying gear that could accurately and reliably take down those helicopters. The role of helicopters as transport has now been strictly restricted, to the point where they’ve become “fast trucks” working in the backfield.

When it comes to offensive use, a helicopter thrumming across the combat area to unleash a rack of missiles, then curling away with prop-wash rattling the trees, still has a psychological impact that’s hard to match. However, in terms of real damage done, couldn’t a Bayraktar or two achieve much the same thing, at much lower costs, without putting at risk either a multi-million dollar helicopter or its well-trained and irreplaceable crew?

As the use of drones in this war expands, it’s not the tank that is likely to meet its end as a military weapon. It’s the weapon that operates in the same way, with many of the same goals, as those drones. The utility helicopter is unlikely to disappear because there are still many roles it can perform, but the attack helicopter may really be seeing its future written, day by day, in the rising number of losses above Ukraine.

The coordinates shown on this screen indicate this launch is against a Russian jet deep inside Russian-occupied territory. Systems like this are definitely contributing to high rates of aircraft losses.

Of course, things are also not so safe on the ground.

I won’t pretend to know how concerned to be about this. Please note that Serbia did this same thing just a couple of weeks ago, and then hit the snooze button.