The things that are not happening may be the most interesting 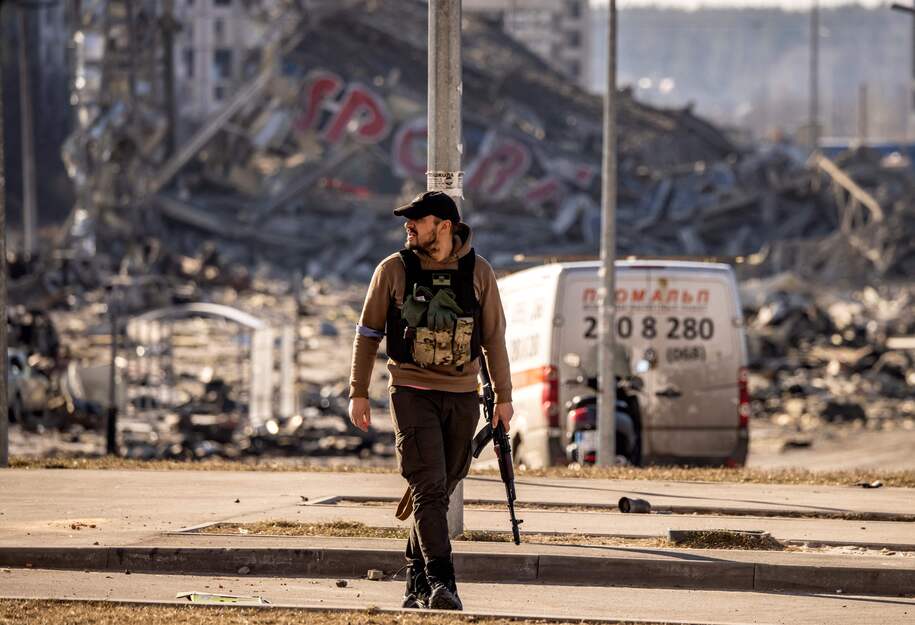 Ukranian serviceman in front of the rubble of the Retroville shopping mall in Kyiv. March 21, 2022.

From the first day of the Russian invasion of Ukraine, there have been reports that more big moves were on the way. Amphibious assaults were reportedly on their way to Odessa. Belarus was about to send thousands of its own soldiers over the border. Thousands of foreign fighters were ready to rally to Russia’s cause.

Any of those things might still happen, but on Tuesday afternoon in Kyiv, none of them have happened yet. Syrian troops that Vladimir Putin bragged about in the first week of the war are still sitting in Syria, with no sign that they’re about to board any transportation to bring them into Putin’s war. Belarusian forces continue to make a great show of shuffling back and forth inside Belarus, but have yet to line up near the border, much less cross it. Odessa’s beaches remain clear.

While Ukrainian forces are conducting a counterattack that has driven back Russian forces around Kyiv and opened much of the road into Kherson, there is a lot that’s not going on in Ukraine. Despite advertised claims that 40,000 Syrian mercenaries would be joining Russian troops, that hasn’t happened. The same thing goes for other claims about forces from other Russian allies. There does seem to have been some number of Chechen  fighters involved in the southeast of Ukraine, but so far their numbers seem few and their impact undetectable. The only Belarusian forces to enter Ukraine so far as those which have volunteered to fight for Ukraine. In fact, the Lukashenko dictatorship has had to taken moves to quiet down what appeared to be vibrant recruiting for more Belarusian volunteers.

In all these cases, the answers seem to be the same: these are the children of failure. Had Russia been able to march into Kyiv and put on their dress uniforms, Lukashenko would have been happy to see Belarusian troops at the side of the Russians. If test landings east of Odessa not met with stiff resistance, Russian landing craft would have crowded the harbor weeks ago. If things were going well for Russia—if Russia was demonstrating the kind of military prowess that they were thought to possess before the bubble popped—everyone in their sphere would be taking them up on invitations to get a hand in, if only to keep on Putin’s good side.

But there have been no parades in Kyiv, no landing at Odessa, and no fast victory for Russia. In fact, everyone reading the map now sees the same story — Russia is not only not winning, it’s not capable of winning. That’s not the kind of situation that generates a lot of support. It’s the kind of situation that causes reluctant allies to wonder whether Moscow is still worth talking to. And has puppet rulers sweating over how long they can stay in power. One thing is certain: Russia’s evident weakness in Ukraine is going to create a great deal of instability within Putin’s sphere.

On Tuesday, there are once again warnings of Belarusian troops movements and threats that they could introduce thousands of soldiers into the northwest of Ukraine, requiring Ukraine to move some of the forces now fighting near Kyiv. But unless Vladimir Putin has found some other stick to wave at Belarus, don’t expect that to actually happen. Lukashenko will continue to say “Yes, boss. Any day now, boss,” and Belarus military will keep moving their troops back and forth, unless Putin can deliver a believable threat that gets them moving.

Speaking of Syrian, on Saturday, marches were planned by both Syrian and Ukrainian groups calling for the U.K. to change immigration policies. But as the two protests reached the same area, this happened.

Incredibly moving moment at the London protests today: the Ukrainian and Syrian marches have united, shouting ‘Stop Putin, stop the war. Together we will win’ pic.twitter.com/obZxU8cgSO

This is also in the southeast, in Donetsk Oblast. It’s about 40 miles north of Donetsk, and in the same area as Severodonetsk, where a hospital was shelled on Tuesday. The explosions at Kramatorsk look to be bombs. Both of these actions may reflect a new Russian push to expand control in the Donetsk / Luhansk region.

Following reports that Ukrainian troops had retaken Makariv, to the west of Kyiv, there are now reports that Ukraine is in control of Moshchun, immediately north of the capital. If this is true, then Russian forces in the Irpin and Bucha area are in danger of being encircled and cut off from either supplies of lines of retreat.

We haven’t given a lot of attention to “the rail war” in Belarus, Ukrainian supporters among Belarus’ railway workers have been sabotaging racks and switches for days, in an attempt to slow Russian supplies and prevent Belarus from entering Putin’s invasion.

The head of the Ukrainian Railways Alexander Kamyshin confirmed that there is no railway connection between #Ukraine and #Belarus “thanks to Belarusian railway workers”. They’ve indeed launched what they called “a railway war” with many acts of sabotage to stop Russian equipment pic.twitter.com/Tji0gkkdNP

Reading through Cyrillic language posts on Telegram and Twitter at the moment is interesting, because many Russians seem to be convinced that NATO — and specifically the United States — is about to roll out of Poland in into Belarus using thousands of Abrams tanks as the US Navy launches an invasion of Syria.

It’s almost as if they understand that Russia has revealed its weakness, know that the majority of Russian forces are tangled up in Ukraine, and are anticipating what Russia would do in such circumstances.