Thoughts on evidence in the Oath Keepers trial 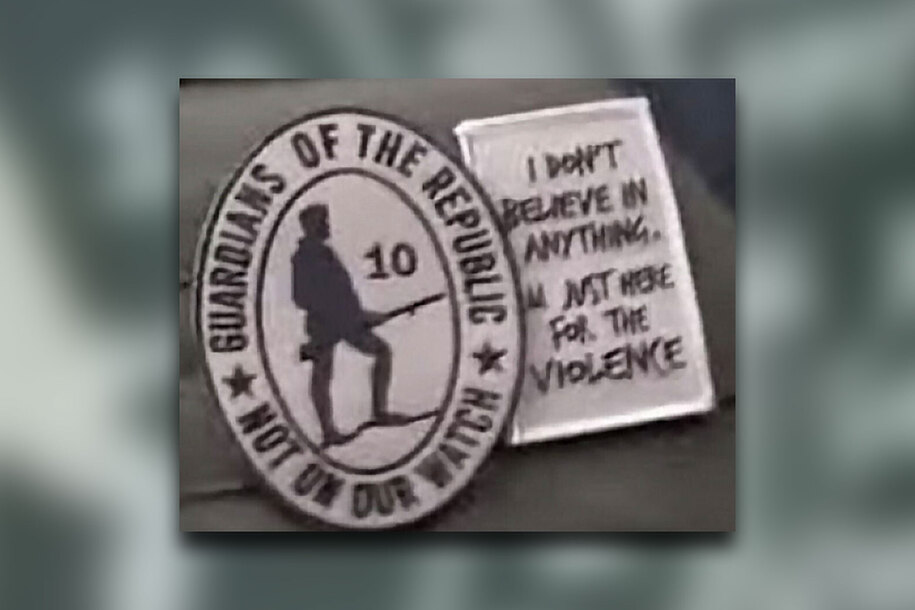 A patch worn by Oath Keeper Kelly Meggs on Jan. 6

There’s something I’ve been thinking about while I have been listening to testimony at the seditious conspiracy trial of Oath Keepers founder Elmer Stewart Rhodes.

Every time a witness who was or is part of the organization testifies, as they introduce themselves to the jury and they explain, in effect, how they got to where they now find themselves, there’s a sort of fawning that happens when these mostly old, mostly white men talk about the group.

They speak of camaraderie. They speak of brotherhood. They speak of a willingness to help. Before they even get into the allegations at hand or talk about their reverence for things like the Constitution or the Second Amendment, there has been testimony too about coming together during trying times, like during a natural disaster, where they are willing to step in to provide “protection.”

The definition of “protection” may vacillate a bit but it is overwhelmingly discussed in terms like what Rhodes described when he was on the stand.

During Hurricane Katrina, for example, he said people were having guns taken from their homes “door-by-door” prompting Oath Keepers to show up and ensure people were not being disabused of their Constitutional rights.

He didn’t speak much about providing food or transportation or shelter. And if you were to ask him, it’s not difficult to imagine him saying these elements are not necessarily his organization’s chief priority since their expertise is primarily “security.” Or in other words, the muscle, to “assist” those doing what can viably be described as “the real work” in a disaster scenario (See: feeding, clothing and housing people as they pick up the pieces.)

Besides, his remark about the confiscation of guns post-Katrina was exaggerated.

In 2015, Mother Jones reported that even on blogs “sympathetic to Oath Keepers,” there was concerted pushback over claims that a widescale seizure of weapons by the federal government was taking place in the storm’s aftermath.

In fact, public court records show 552 guns were seized in the aftermath of Katrina and “were mostly inoperable junk guns.” And as the report digging into these claims noted, “either way, in a city of nearly half a million, where gun possession had always been popular (and exploded after the storm), that doesn’t amount to a totalitarian power grab.”

In Louisville, after Breonna Taylor was killed by police and protests erupted, Oath Keepers showed up to “protect” businesses. In video shown to jurors, locals are heard imploring the armed Oath Keepers standing in a circle around a vehicle to leave.

Local police asked Oath Keepers to leave Ferguson, Missouri after Michael Brown was killed by police. And though it has been almost a decade since real cops with real badges asked Rhodes and his cosplayers to stop offering their “services”  in St. Louis, Rhodes appeared to still smart at the memory when testifying at the trial in Washington.

They were showing cops how to “do things right,” he said,

We supported the protestors right to protest; the curfew in Ferguson was unconstitutional, Rhodes says.
They told cops in MO “how to do it right” and how to “find the actual trouble makers”
“You don’t try to shut down hte entire protest, you try to target the actual criminals.”

The good samaritan shield Rhodes hoists up may have been forged in earnest fires once and it may be true when other Oath Keepers say they joined the group because they wanted to be part of something meaningful.

Perhaps, yes, in the minds of some of these men, there was a time and place where they believed there was something worth protecting in a vulnerable stranger—no matter any possible difference in opinion, color, or creed.

Maybe the hope was real, the belief that the experience of those who have traveled tough terrain could be valued. Maybe there could be a place for people who understood what it is to sustain on very little for very long in dangerous places? Maybe there would be a use in peacetime, right here at home, for people overly acquainted with the theater of war.

Perhaps there was a time when the idea of utilizing veterans and first responders to form a community of public servants was the goal. 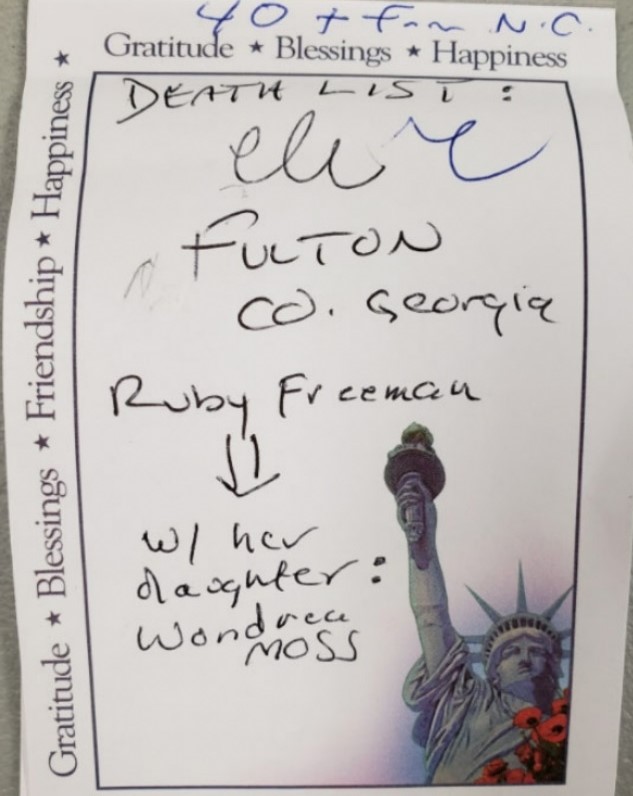 Who is the person who views other human beings as “bugs” that need to be fought in the streets? 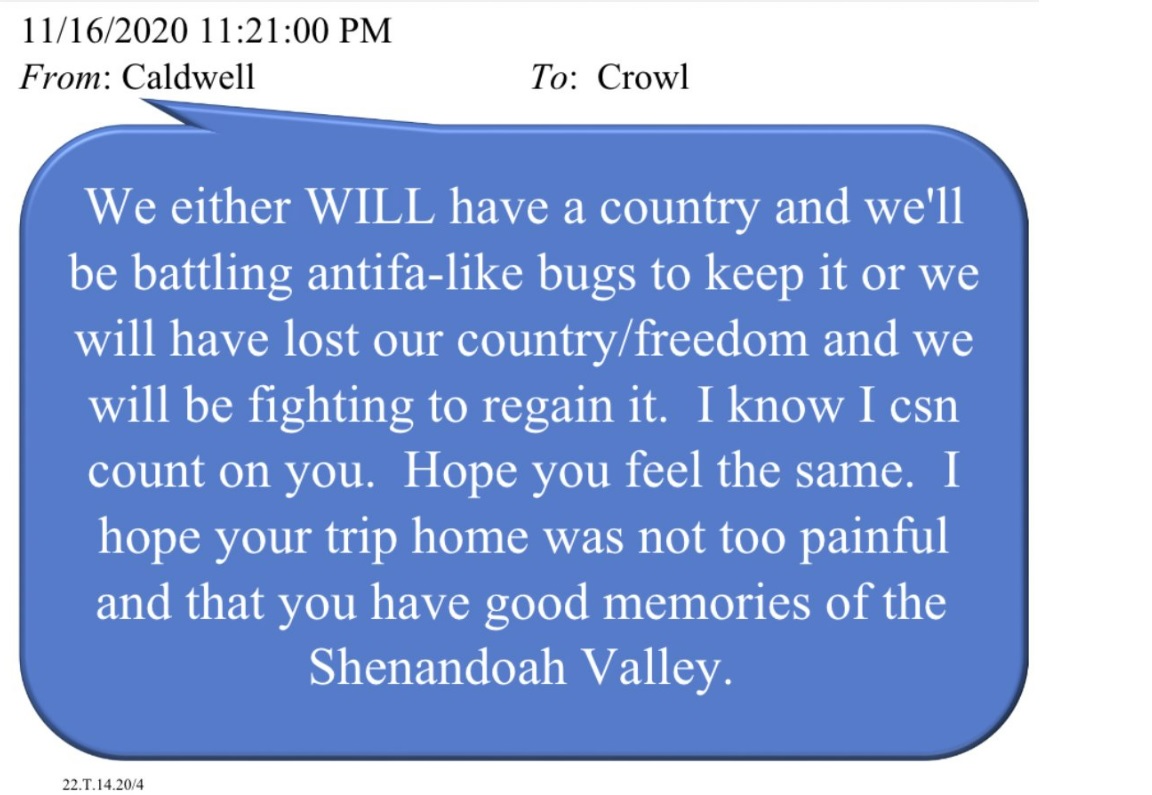 Who is the person who looks at their fellow citizens in the 21st century and believes that political or ideological differences can only be resolved by fighting a civil war? 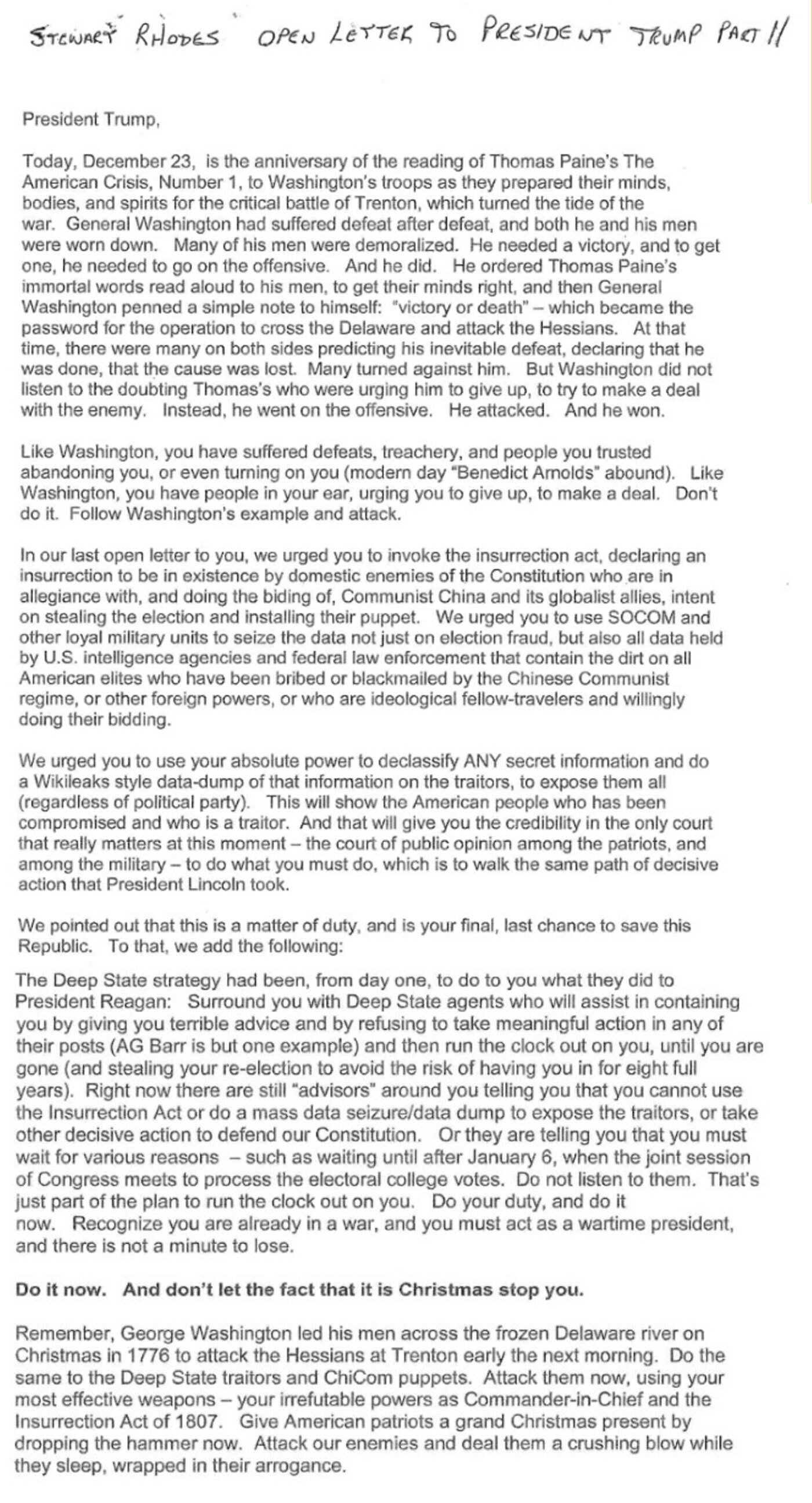 An open letter published on the Oath Keepers website penned by founder Elmer Stewart Rhodes urging former President Donald Trump to invoke the Insurrection Act in order to overturn the results of the 2020 election.

What does it say when a so-called good samaritan enters the nation’s Capitol during a riot with a patch on themselves that states plainly: “I don’t believe in anything. I’m just here for the violence.” 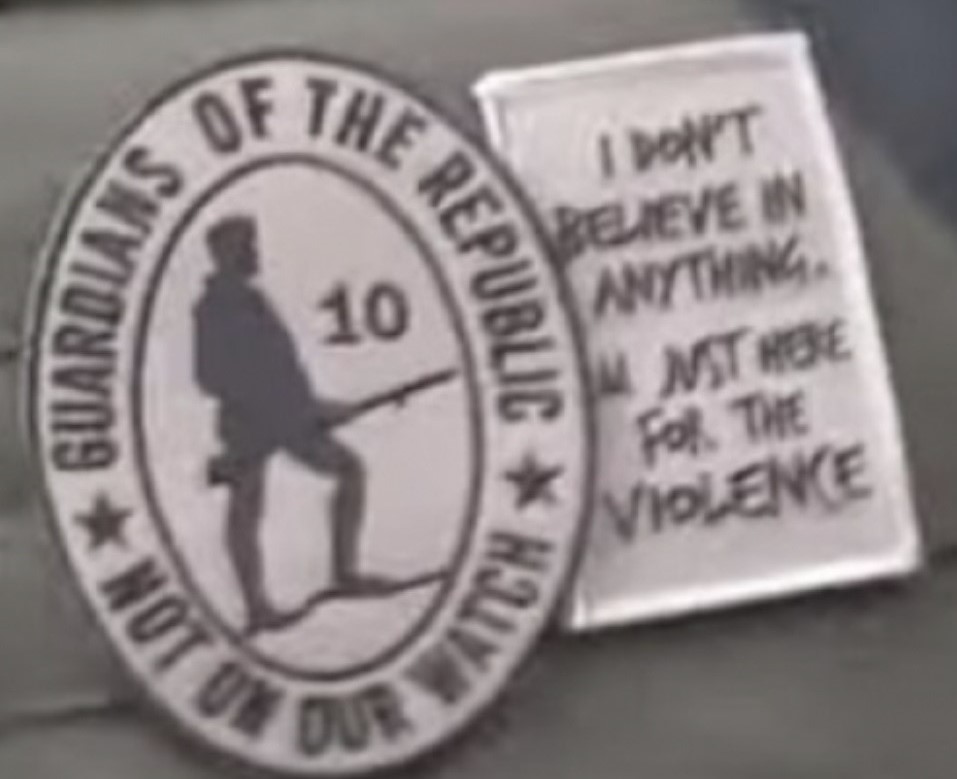 A patch worn by Oath Keeper seditious conspiracy trial defendant Kelly Meggs on Jan. 6, 2021 as he breached the Capitol.

Members of the Oath Keepers, including Rhodes, have testified for weeks that they are admirers of the First Amendment. Much time has been devoted to featuring the claim that Rhodes and co-defendants Jessica Watkins, Kelly Meggs, Kenneth Harrelson, and Thomas Caldwell merely shared a penchant for braggadocio when they discussed plans that could “go kinetic” when they came to Washington to “help” on Jan. 6.

Rhodes continues to members: “You’re from OKers. You’ve got responsibility and duty. You know you raised your freaking right hand. you swore that oath. You don’t get back out of it and run to freaking Belize or Costa Rica…”

America’s first president George Washington, who Rhodes himself revered highly, once said “if the freedom of speech is taken away then dumb and silent we may be, like sheep to the slaughter.”

Washington followed it up with another thought immediately after: “It is far better to be alone, than to be in bad company. Truth will ultimately prevail where there is pains to bring it to light.”

The Justice Department has taken great pains to bring to light what Rhodes and his cohorts said and did before, during, and after January 6, 2021. 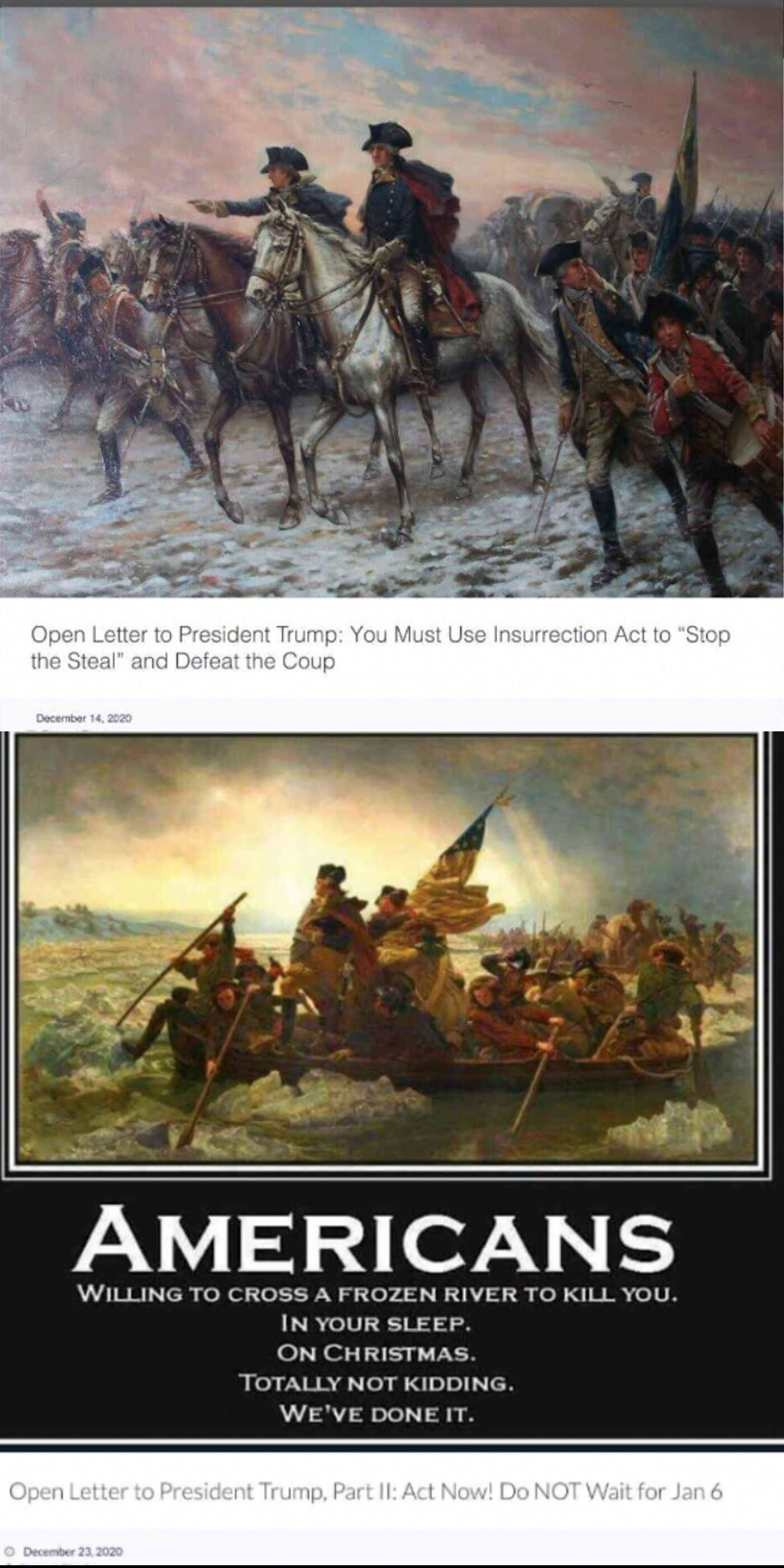 Oath Keeper founder Stewart Rhodes used images of George Washington in banners that ran across the top of two of his open letters to Donald Trump where he urged Trump to invoke the Insurrection Act and raise Oath Keepers to his side to overturn the 2020 election.

The notion that the Oath Keepers good samaritan defense is believable beyond a reasonable doubt tests the limits of logic.

The presupposition that the group’s only plan was to be ready to provide “assistance” to a U.S. president—who helms the second largest military in the world— is hard to square against a mountain of damning diatribes and testimony.

When men keep bad company, are they able to have honor?

The Oath Keepers communications presented to jurors over this last month often appear dripping in contempt for anyone who might oppose their ideological world-view. Entire swaths of people are lumped into a singular category. 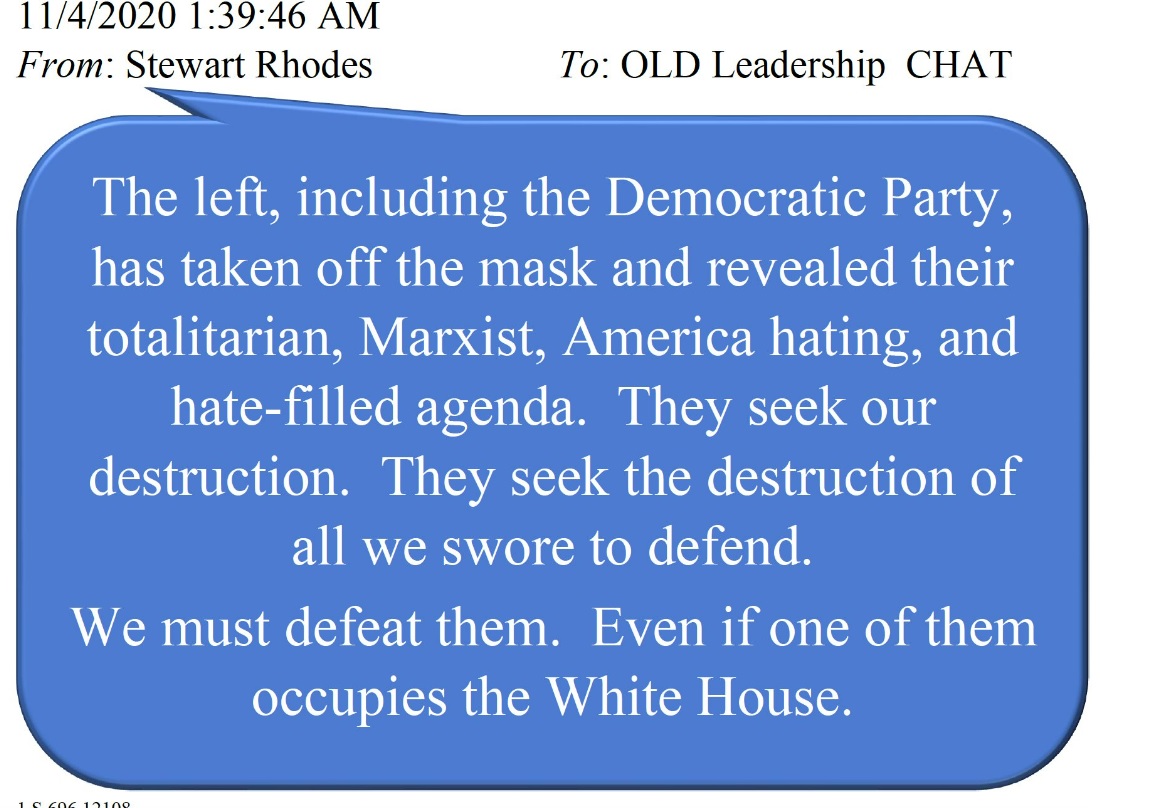 There is only an eye for an eye. 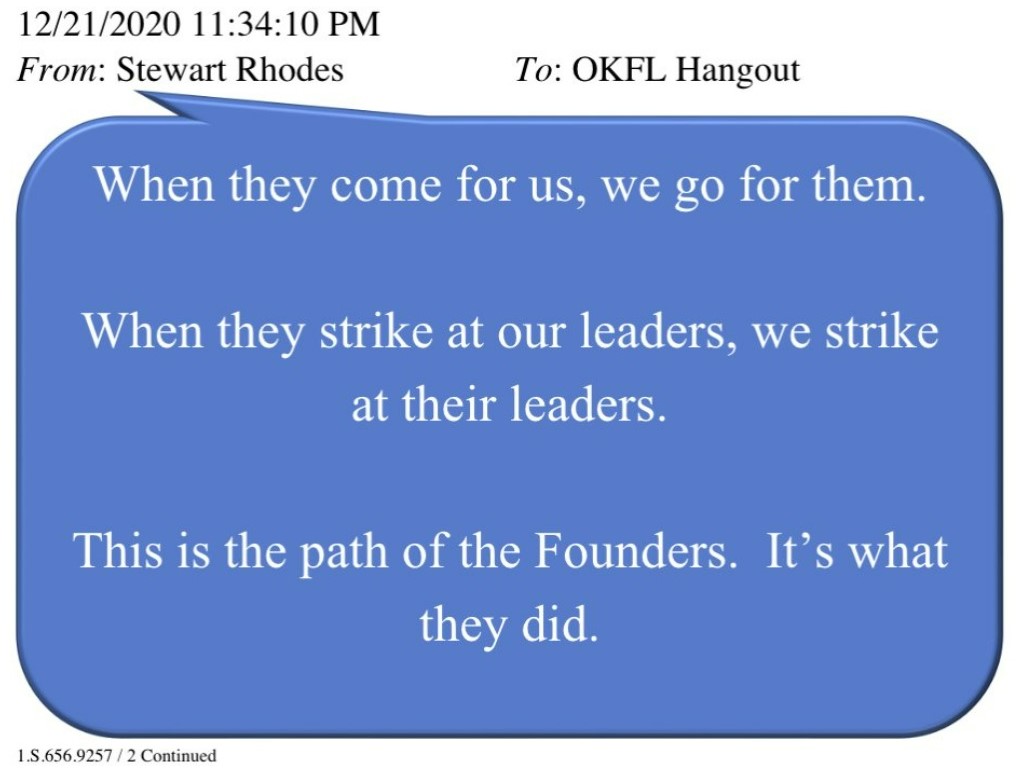 There are only more wars to fight. 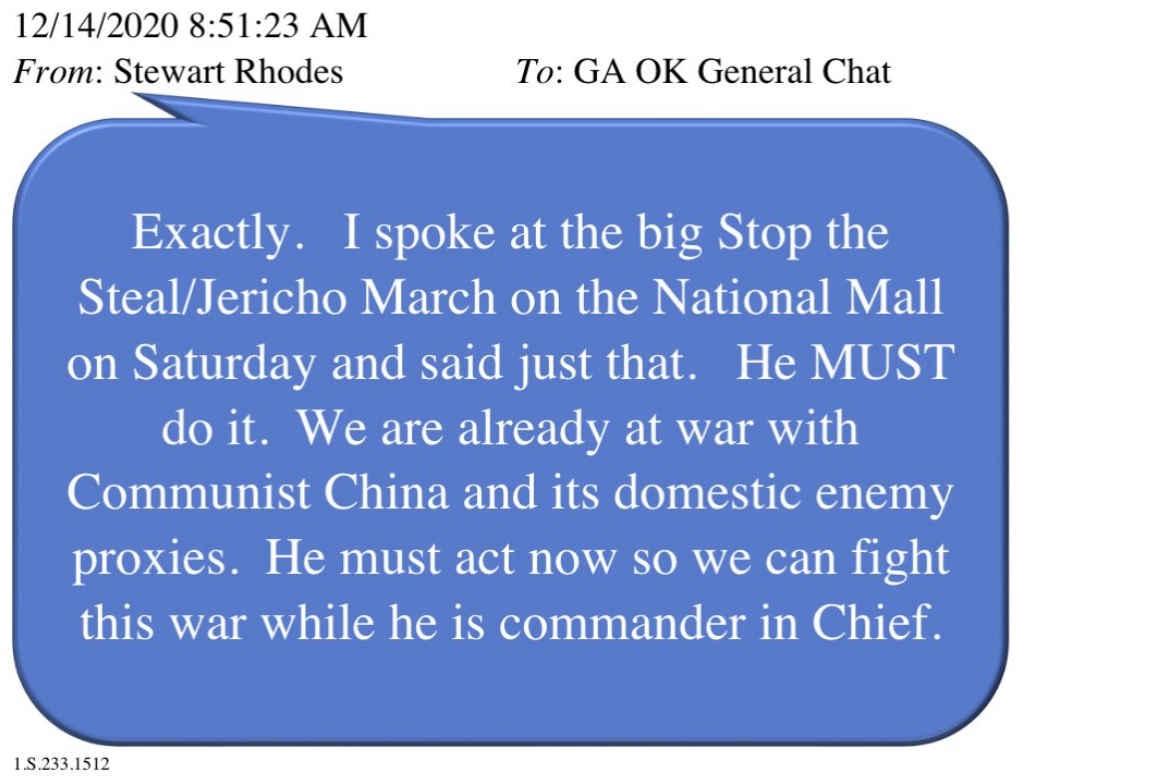 Perhaps if some of these men, in another timeline, would have not been radicalized by disinformation or were not so driven to toy with power because they felt so underutilized or unheard themselves, then their claims of righteousness would be easier to believe.

But there’s vigilantism that hides in every piece of evidence. There’s a violent disregard for a difference of opinion.

And now, there is only a jury that will decide what comes next.