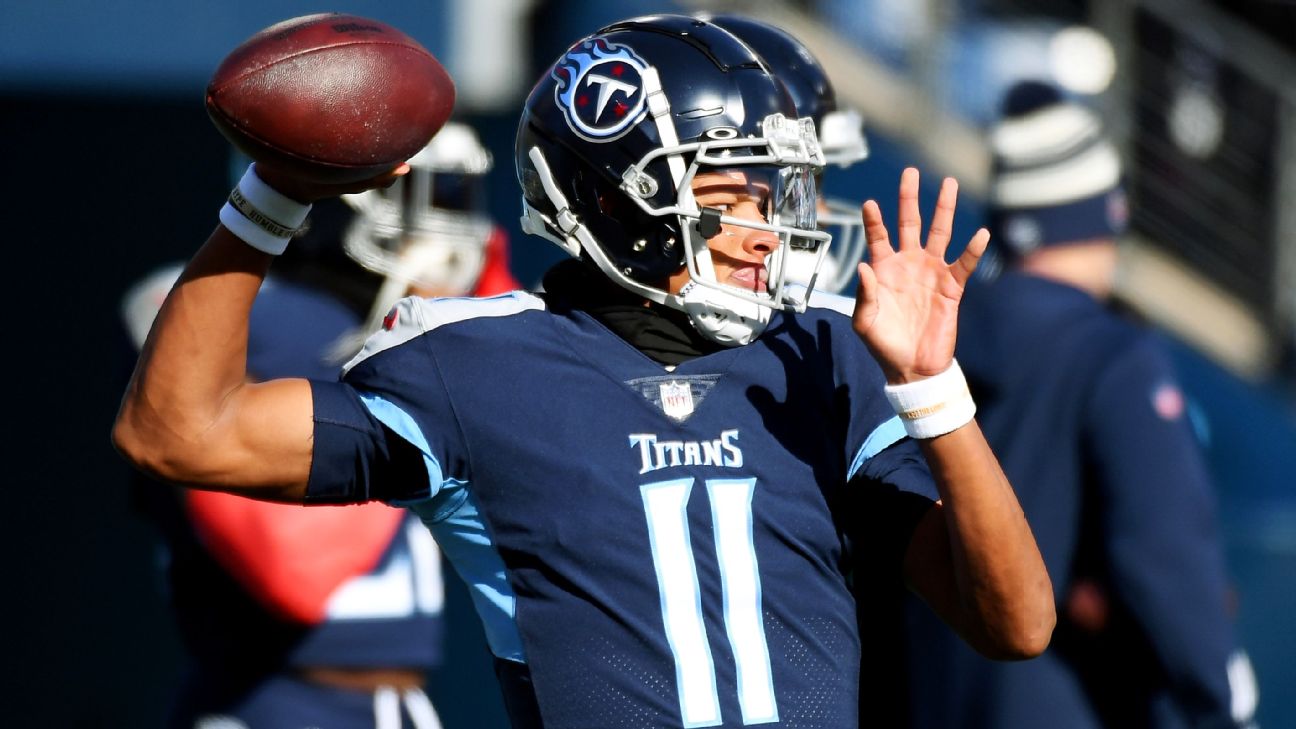 The Tennessee Titans are expected to start Joshua Dobbs at quarterback in Thursday night’s game against the Dallas Cowboys, a source confirmed to ESPN.

Dobbs, signed off the Detroit Lions’ practice squad eight days ago, will get the start over rookie Malik Willis, who has struggled in his three starts. This will be Dobbs’ first NFL start.

The news was first reported by The Draft Network.

Titans starting quarterback Ryan Tannehill is out for the rest of the regular season and likely the postseason, if Tennessee qualifies, after undergoing surgery for a high right ankle sprain last week, sources told ESPN’s Adam Schefter. The Titans officially placed Tannehill on injured reserve Thursday, meaning he will have to miss at least four games before he could return.

Willis, selected in the third round of this year’s draft, has failed to pass for 100 yards or complete a touchdown pass in any of his three starts in place of Tannehill. The Titans are 1-2 in his starts despite Willis completing just 50.8% of his passes and having three passes intercepted. He has rushed for 123 yards and a touchdown.

“As [Willis] continues to grow and mature, I think he’ll see some things a little bit quicker,” Titans offensive coordinator Todd Downing said this week. “I can put him in some better positions, and it’s all hands on deck as we try to get things figured out.”

Tennessee has ruled out a slew of starters for the game against the Cowboys, including Pro Bowl defensive tackle Jeffery Simmons. In addition, Pro Bowl running back Derrick Henry is doubtful.

Two of those starters who were ruled out — linebackers Bud Dupree and Zach Cunningham — were placed on injured reserve Thursday.

Dupree missed five games earlier this season after injuring a hip before a pectoral injury landed him on injured reserve. He finishes the season with four sacks, six tackles for a loss and nine quarterback hits. Dupree signed a five-year, $82.5 million deal with the Titans in 2021.

Cunningham was claimed off of waivers by the Titans last season. He missed six consecutive games with an elbow injury after being placed on injured reserve in November. The Titans activated Cunningham from injured reserve last week only to have him reinjure the elbow against the Houston Texans. Cunningham was scheduled to make $10.4 million this season but restructured his deal to provide $6 million in cap relief.

Coach Mike Vrabel’s team is in the midst of a five-game losing streak. Although a win against Dallas would do wonders for morale, the Titans (7-8) find themselves in a win-and-in situation next week against the Jacksonville Jaguars (7-8) regardless of Thursday’s outcome.

Dobbs has appeared in six regular-season games in his career, all with the Pittsburgh Steelers, who selected him in the fourth round of the 2017 draft. He has completed 10 of 17 pass attempts for 45 yards with an interception in those games.

Dobbs was with the Cleveland Browns this season but didn’t appear in a game. He was cut by the team when quarterback Deshaun Watson was added to the active roster following his 11-game suspension.

“He’s a very bright young man and he’s working really hard to pick everything up,” Downing said. “There’s some familiarity and carryover in the terminology from where he was in Cleveland. I was with [Browns coach Kevin] Stefanski in Minnesota, so I can try to give some ‘Spanish to English’ to him a little bit. I think as long as we can identify what he’s comfortable with, that’ll determine the volume.”

ESPN’s Ed Werder and Turron Davenport contributed to this report.