T’was the night before Christmas, and Rand Paul is being Rand Paul again 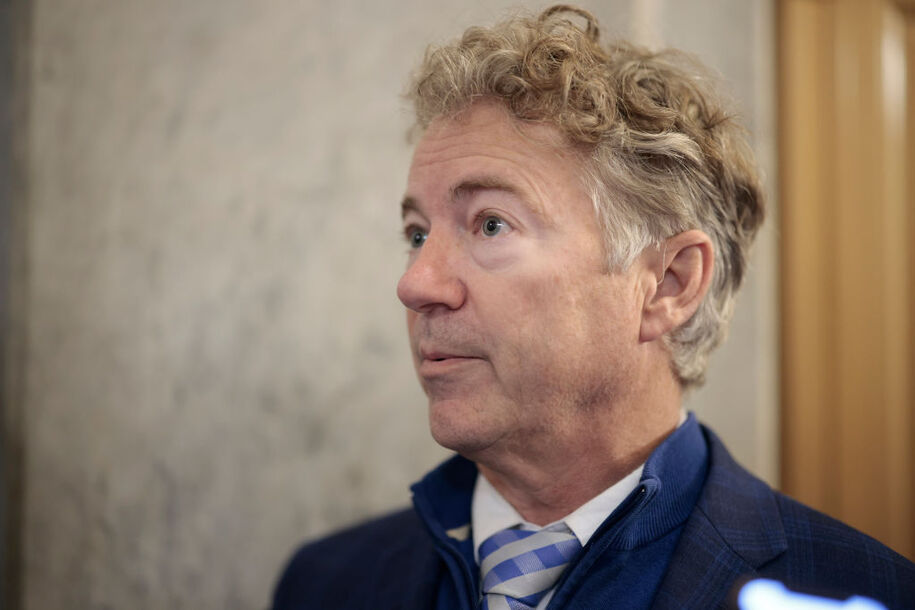 Maybe if you spent less time fighting with government pandemic experts you could have worked on your poem a bit more.

What … what am I looking at here?

This is one of those things that sort of defies conventional description, so, uh, what are we supposed to do here? Is this a drinking game? Is this, like, what happens to egg nog if you leave it out too long? It grows a red jacket and lights some candles?

Ugh, okay. Here’s how we’re going to do this. We’re all going to drink whatever we have on hand, and in my case, that’s the day’s fourth coffee seasoned with whatever spite I could shake out of the spite tin—note to self: order more spite—and in your case, you can pick your poison, and we’re all going to do this with the most minimal effort we can possibly put into anything. Got it? Ok, let’s hit play and see what’s going on.

All right, all right, stop. Only got two seconds in before Mr. Pause Button got his first punch. First off all, this poem is terrible in every version. This is a bad poem. I realize it’s supposed to be a bit of force-fed nostalgia that brought previous generations to weepy tears as they puffed on their cigarettes and made sure the baby’s bottle had enough gin in it to put the little twit down for the night, but even in those hoary days of greatness this was a very forced poem that goes on too long and seems primarily devoted to portraying Santa Clause as a thinly veiled Lovecraftian horror that must not be trifled with or questioned lest the fabric of reality tear and the children wake up to find their parents’ entrails stuffed into fireplace-mounted yarn stockings.

Okay, made it to the rhyme between “debt” and “wept” this time and I guess that’s where we’re going with this. The spirit of Christmas is gonna be a big Rand Paul middle finger to anyone looking for a moment of holiday respite from His Unrelenting Damn Bullshit.

“Senators sprang from their oxygen” does not make sense as a phrase. Try harder.

Okay, so now the spirit of Christmas means giving voice to your seething resentment over keeping the government running. Made it a minute and change in this time, and just as general writing advice, Rand, it’s a lazy move to keep big parts of the poem the same as the original because you couldn’t be bothered to commit to the whole bit. Hitting Play again now.

See, that’s what I mean. “Now McConnell, now Schumer, now Pelosi and Vixen!” Why the hell does Vixen keep his position? Is the premise here that a sleigh is being pulled by three Democratic senators and a regular flying reindeer? Does Vixen have something on you? Is this one of those tit-for-tat deals we hear about, did Vixen keep his named slot because he shared email lists with you during the last campaign?

Aaaaand now it just goes off the rails. “To debt!” our not-Santa screams, that being a thing a not-Santa would scream if Santa were a figment imagined by a sentient puddle of molding egg nog that found Rand Paul’s personal shroom stash. And now Santa is mostly Santa again, except the words “appropriators’ dream” appear, which is a phrase you will only ever hear in a Rand Paul Christmas poem and probably the exact phrase that set his neighbor off that one time.

Jeebus, this thing just goes on and on. This is why people should parody shorter poems.

Stop! It’s not “how Mary,” you pathetic Christmas caption-hack, it’s “how merry.” If you go up to a large elderly bearded man and call his dimples “Mary,” you’re going to have at least three separate Republican governors setting up new hotlines to report you for improper dimple grooming or whatever. I HATE THIS POEM SO MUCH.

Now the whole structure here seems to be going south. Maybe the fake fire is too warm on his backside, but “and don’t forget a delicious candy cane sweet with $40 billion to tide over Ukraine” feels less like poem material and more like Ted Cruz filibustering a rental car attendant who’s told him they only have economy models left.

Sure, the Christmas spirit means complaining that NATO keeps getting in Vlad Putin’s way, got it, whatever. Once you’ve got a large immortal dude wormholing his way down your chimney, you can’t argue that anything else is going too far off your script, there aren’t any real rules here.

Okay, I think he’s wrapping up now, Santa is leaving. Taking his damn sweet time about it, but there he goes. Eventually. Maybe scrub the flue a little on the way out, Saint Nick, since you’re immortal and seem to have literally all the time in the world here.

Wait, now there’s a disclaimer. Wow, the whole last 23 seconds of this thing is a disclaimer. Oh, it’s devoted to the “kids” who might have gotten scared by his poem. Listen, buddy: If there’s any kid in America whose parents sat them down to watch this thing, I promise you they live lives of such transcendental terror that you saying “economist” at them will bounce off like a chimney brick to Santa’s immortal inflamed nose. These kids already know they’re getting Rand Paul coloring books for Christmas, you could threaten them with a poem about surfactants or rectums and it couldn’t break their spirits any more than their parents already have.

All right, I guess that’s over. Wait, why did we have to do this? I need to lodge a complaint, that was some real Twin Peaks meets Lyndon LaRouche newsletter stuff. He should have put the disclaimer up front. He should have just made the whole thing a disclaimer and skipped the poem. God, I’ll never be able to smell egg nog again without getting nauseous. I couldn’t before, mind you, but I think it’s worse now.