Pretty terrible prognosis of US emissions. Notable to see the power sector in particular stagnate – nicely illustrates that fossil gas replacing coal gives you an initial hit, but then burdens you with a fleet of highly polluting power stations. https://t.co/D8RdYhqouw pic.twitter.com/CkJpI7YgcT

The good news from Rhodium is that wind, solar, and hydropower produced 22% of the nation’s electricity in 2022, up 12% from 2021. If transmission line obstacles were removed, a lot more utility solar now awaiting a hookup to the grid could be installed. Coal-powered electricity generated 20%, down a bit from 2021, but 25 years ago it was 53% of the U.S. total. Natural gas, on the other hand, generated 39% of total electricity in 2022. In the short term, that can mean lower greenhouse gases than burning coal. But much natural gas is now got by fracking, which leaks a lot more methane than was previously thought when owner-operators were doing all the measuring. What’s worrisome is all the new natural gas infrastructure being built with a 60-year lifespan. There’s talk of switching it to hydrogen eventually, but that’s impractical. 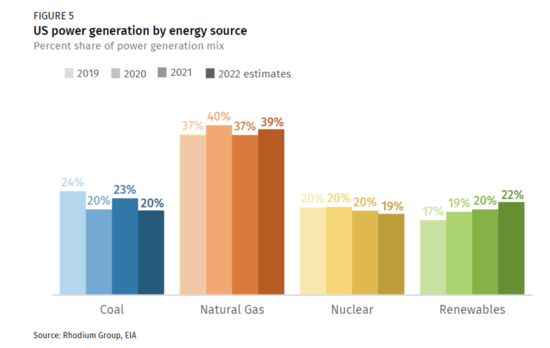 Five years ago, the Intergovernmental Panel on Climate Change (IPCC) published a special report on holding global warming above preindustrial levels to1.5 degrees Celsius (2.7 degrees Fahrenheit). The scientists who researched and wrote the report didn’t pull any punches. As noted in Nature at the time:

The world would have to curb its carbon emissions by at least 49% of 2017 levels by 2030 and then achieve carbon neutrality by 2050 to meet this target, according to a summary of the latest IPCC report, released on 8 October. The report draws on research conducted since nations unveiled the 2015 Paris climate agreement, which seeks to curb greenhouse-gas emissions and limit global temperature increase to between 1.5 and 2 °C. [2.7° and 3.6° F].

The world is on track for around 3 degrees of warming by the end of the century if it doesn’t make major reductions in greenhouse-gas emissions. It could breach 1.5 °C some time between 2030 and 2052 if global warming continues at its current rate.

In other words, they concluded, the world needs to be on a trajectory to carbon neutrality by 2030, and at carbon neutrality by 2050. As the IPCC reported several months ago in its 2022 Emissions Gap report and in its 2021-2022 Sixth Assessment Report on the climate, with less than a decade left to get on that trajectory, we’re nowhere near where we need to be in reducing greenhouse gas emissions.

The reason? Like nearly every nation on the planet, U.S. pledges under the Paris Agreement don’t cut emissions deeply enough quickly enough to reach the trajectory scientists say we need to be on. And, oh, by the way, barely a handful of nations are fulfilling even those inadequate pledges. Despite the pleas of activists and national vows at the COP26 climate summit in Glasgow in 2021 to come to the COP27 talks in Dubai with stepped-up pledges, none of the major emitters did so.

Ben King, author of the report and an associate director at The Rhodium Group, toldThe New York Times that the decline in emissions is “not happening fast enough” and that “we are essentially on the same trajectory that we’ve been on since the mid 2000s.” King also told NBC News. “If we stopped today and didn’t make policy adjustments and just relied on the Inflation Reduction Act, we would not make it … Additional policy action will absolutely be necessary to achieving those targets.”

So, are we truly screwed? Certainly we will be if lots more of our leaders—union, corporate, local, state, national, and international—don’t stop operating as if tweaking business as usual will do all that’s needed to mitigate our climate predicament. You would think the Rhodium story along with all the other alarms ringing this week and every week would move more of those leaders. Here’s just a sliver:

Why wouldn’t this deluge of news put the spurs to everyone with the clout to have an impact? Instead of so few? If this were a matter of believing the Rapture will come before climate change gets too bad, I could understand. But most of these foes of serious climate action seem about as religious as a crayfish. Is it truly just greed? Apparently.

Having mostly given up the it’s-a-hoax form of climate science denial, the fossil fuel magnates and their marionettes in government and “think tanks” now are determined to drag out decarbonization and the transformation of energy, agriculture, transportation, and construction so they can keep the fossil fuel money spigot wide open well into the latter reaches of the century. If we don’t want our progeny and the rest of the species on this planet to confront the hellscape of a 3-degree Celsius future, we need to either persuade those leaders into more serious action on the climate crisis or become those leaders ourselves.

A reminder: At this stage, we don’t know whether our mitigating and preventive actions now will in the future stop or moderate some of the most savage climate impacts. Much may be already “baked in,” as some scientists say. But there’s a wide range in forecasts of exactly how much. All we know for certain is that not acting soon and aggressively will ensure catastrophe.

Global cooperation is essential to this project. But the United States has at best a very mixed record of contributing to and addressing the climate crisis. Though it ought to be in the forefront of a cooperative global mobilization to deal with it, the powers-that-be, the powers-that-lied-for-so-long, are in the way. They may be snootily appalled by the vulgar pitchman and golf cheat Donald Trump, but it should be remembered, he was applauded by most Republicans, a few Democrats, and a sea of oil execs when he pulled the U.S. out of the Paris Agreement. It’s a milquetoast, nonbinding pact and it’s most obviously not enough, but for now it’s all we’ve got.

Until recently, many top Democrats have been infuriatingly timid in the matter of climate. That’s changed very much for the better, though we climate hawks want still more. But slim congressional margins make for gridlock even on modest national policy changes. And while a few states are making progress on regulatory efforts to cut emissions and others are trying, most have done nothing.

This is why we need more candidates who put climate near the top of their priority lists even though most of the general public does not. It’s just seven years until 2030. Seven years to get on the necessary trajectory, say scientists. What’s that old expression? Do or die?