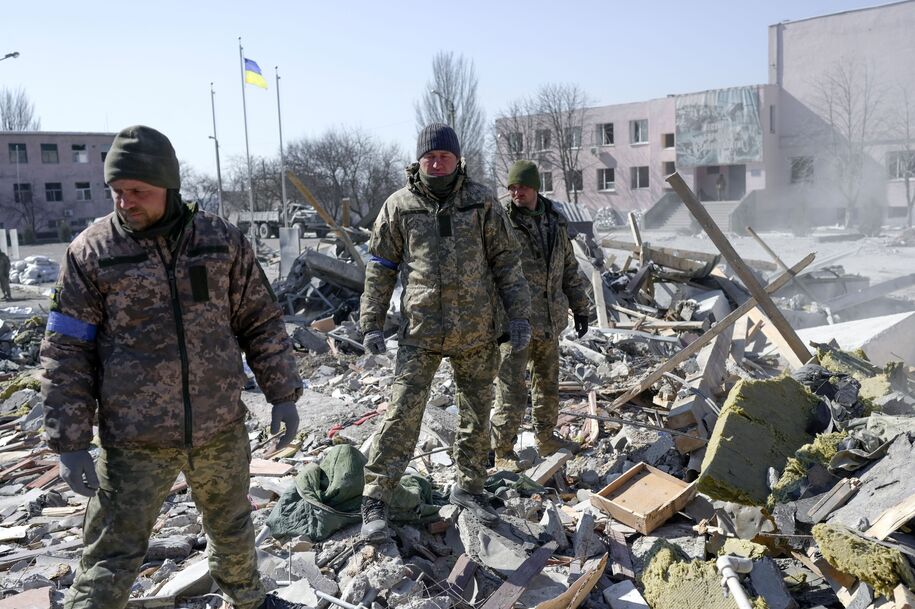 Ukrainian soldiers search the debris of a military school hit by Russian rockets on Mar 18, 2022.

Mariupol has among the most awful spots in Ukraine since the start of Putin’s war. Like Kharkiv and Sumy in the north, it has suffered from almost continuous shelling, bombing, and missile attacks. But where those cities have pushed back Russian forces moving in from the east and have maintained supply lines for food and weapons, Mariupol has been surrounded since shortly after the invasion began. Russian forces have purposely destroyed the area’s access to water, gas, and electricity. They’ve blocked humanitarian convoys attempting to bring in food and medical supplies. And they’ve kept over 300,000 people bottled up even as Russia continues to blast away.

Now, with over 80% of Mariupol’s residences damaged or destroyed, and with emergency workers still trying to extract those trapped beneath the rubble of the theater that Russia purposely bombed on Thursday, Russian forces have finally broken through Mariupol’s outer defenses and fighting has moved into the streets. Ukrainian defenders—despite a shortage of both food and ammunition—managed to take out a trio of Russian tanks on Saturday, but with the fighting near the center of the city (and interfering with efforts to save those still under the theater), the mayor of Mariupol has warned that the city’s remaining defenses may soon collapse.

If that happens, resistance is sure to continue in the debris-choked streets, but Russia will be at least able to claim that it controls the entire coast of the Sea of Azov, with areas in Donbas connected by a corridor to Crimea.

Even so, the stability of that corridor is definitely in doubt. As Kos has repeatedly pointed out, in most areas what Russia actually controls is a very narrow zone around the highways. Maps may show large areas of Russian control, but Russian forces traveling anywhere outside of very tightly defined areas can soon discover that coloring territory on the map red, does not make it yours in real life. And even those red lines along highways, can swiftly be erased.

That’s what is happening now along the road between Mykolaiv and Kherson. Ukrainian forces are advancing from village to village, dislodging Russian troops and reversing a Russian advance that stalled out a week ago. Those Russian forces are likely to fall back on defenses and additional forces in place at Kherson. Kherson, you may recall, was the place Russia was struggling to take on the first day of the war. This is Kos looking at the situation in Kherson on Feb 24.

The left bank is the side with Kherson. If Ukraine truly does hold it, it means Russians on the other side are either destroyed and/or isolated from their supply lines …  there’s no other way to cross that major river:

When it became clear that the bridge was going to fall, Ukrainian forces moved back to Mykolaiv. Now those same units are advancing again and it’s the Russians in retreat. The current front line is back to within 20 miles of that bridge that traded hands multiple times in Febuary.

Coverage of Putin’s invasion has frequently followed a narrative that suggests “yes, Russian forces may be stalled around Kyiv, but they’re making advances in the south.” That’s no longer true. Russian forces are still stalled in the north, but in the south they’re moving backwards. The Ukrainian advances also seem to put paid to narratives that Russia is about to surround, cut off, or otherwise defeat Ukrainian forces in the area.

Russia may, or may not, be about to capture Mariupol. If that happens, there’s no doubt that it will be treated as a victory for their tactic of crushing, starving, and systematically murdering civilian populations. But it’s not clear that this is a “win” anywhere outside of Russia, and it’s not clear that it’s a victory that will stick for long.

This is about 30 miles east of Mykolaiv on the road between Kherson and Kryvyi Rih. Its capture cuts off another previous Russian advance and shows Ukraine moving back toward Kherson along two routes.

Ukrainian defenders have pushed rashist (Russian fascist) invaders out of Snihurivka in Mykolaiv region. The enemy is retreating south towards Kherson. https://t.co/HYqAGIZTqa

This is a map of Russian positions on Mar 19. Previous movements to encircle Kyiv on both southwest and northeast are now either inactive or, in some cases, eliminated.

This a map from five days ago. Russia’s attempts to probe up from Kherson have all been drive back since that time. What was a story of Russia pushing past Mykolaiv and on to points west on Mar 14, has evaporated. In other areas, Russian gains are miniscule.

And here’s a map of Russian positions in Ukraine on Mar 10. Again, the situation the north and south seems remarkably similar to where things stand now, If Russia has gained any actual territory over that time, it seems to be north of Berdiansky and Mariupol along the coast. That, and solidifying some positions in the extreme east, seems to define their gains.

One more. This is the map back on March 3. It shows Russian forces moving north and west out of Kherson to bypass Mykolaiv. That’s no longer happening. Neither are most of the other advances indicated on that date. Otherwise, this map, now three weeks old, is amazingly similar to the latest one produced.

Thought they did change the colors since then.

Something that’s going to be a future collector coin — guaranteed to be in uncirculated condition.