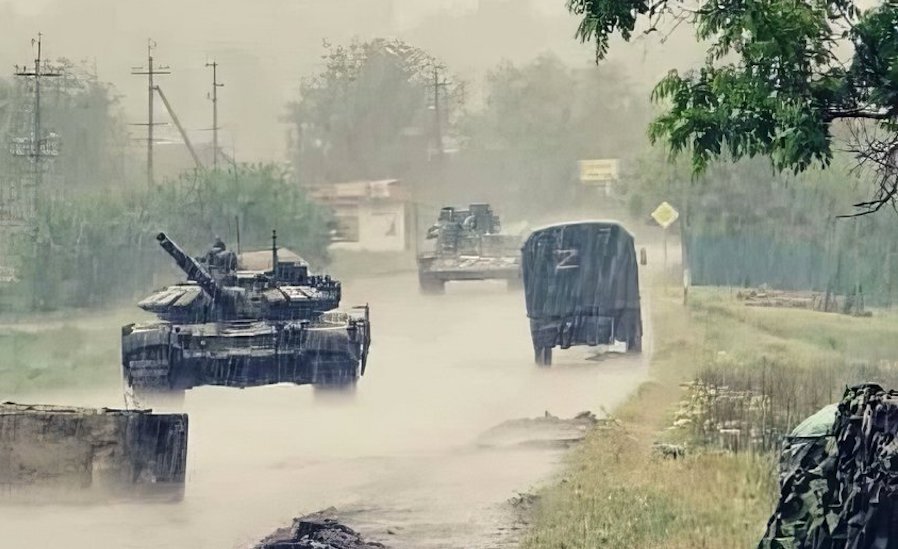 Rainy season is here, and it looks miserable.

🧵 An interesting analysis of the 🇷🇺 logistics in the south by the 🇷🇺 military researcher Atomic Cherry. They show that 🇷🇺 relied heavily on the Crimean bridge and the damage to it will have long-lasting consequences given the lack of alternatives to supply south:

Please let there be ATACMS in this package…

The new US aid package for Ukraine includes:

Here’s a bonus Friday night update, mostly because I don’t want to get up early Saturday to write the next one!

Ukrainian forces continue to advance around Svatove, and are now just one small town away from the city’s outskirts. Mark Sumner, who is on vacation, still took the time to update his map. 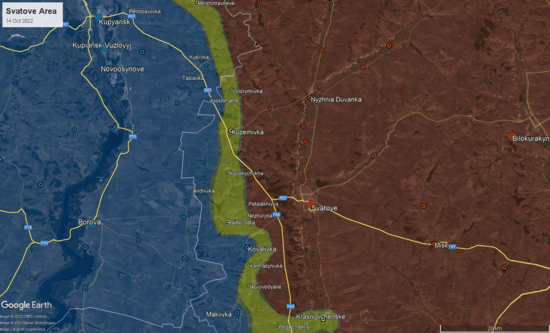 Ukraine is on the edge of that ridgeline that overlooks Svatove and the roads supplying it. If you’ve missed it, I’ve discussed why Svatove is so important here, and in even more detail here. This is a very cool community story exploring the topography of Svatove.

Down in Kherson, the lines haven’t moved much in a while. The Russian puppet mayor of Kherson announced an “evacuation” of the city on Thursday, then Friday said “nevermind,” so not sure what he’s so panicked about. We’re in that place again where Ukraine isn’t saying much, and Russian Telegram isn’t panicked. They need to be properly panicked to tell the truth, otherwise they just invent glorious victories to sustain themselves.

Though it turns out, even that isn’t enough for the Russian authorities. From pro-Russian Telegram:

According to our information, the statement to Roskomnadzor with the requirement to check the work of the above authors was signed personally by the Chief of the General Staff. On the part of the Prosecutor General’s Office, the case is being handled by the head of the department for supervision over the implementation of the law on federal security, terrorism, extremism and interethnic relations. The reason is the criticism of the Ministry of Defense and its decisions during the [Special Military Operation].

How long the check will last is still unknown. But if the corpus delicti is collected, and the guilt is established, the military correspondents will either get off with a fine, or receive up to three years in prison. friendly fire

Rybar has confirmed the news. The inclusion of GreyZone is interesting, as that is the Telegram outlet for Wagner mercenaries. There have been persistent rumors of a rift between Wagner CEO Yevgeny Prigozhin, “Putin’s Chef,” and other Russian elites like Minister of Defense Sergey Shoigu (who somehow still hasn’t been thrown out a window). Throwing GreyZone in a group including other stalwart Russian nationalists would be great cover for any effort to discredit Wagner and Prighozhin.

Want to hear a funny story?

Belgorod is a Russian city just a few kilometers up the road from Kharkiv, which Russia has used as their central logistical hub during their war. So this happened:

Russians shot missiles, then shot them down with their own SAMs and those landed on their railway tracks knocking those out! Talk about three birds in one stone https://t.co/490WPzHLCO

No joke, Russia somehow managed to destroy its own rail lines. And then, to celebrate this own-goal, they did it again.

19:06: loud. Our launches towards Kharkiv
19:10: Our Air defense working
19:23: blackout at Kharkivska Gora district in Belgorod

They literally destroyed their own electrical substation! Here’s the moment of arrival:

Alright, alright, critically evaluating the situation, there’s a chance that Ukraine launched that attack. But given the timeline above, I really hope it was a second own-goal in a single day, because that’s a hell of a lot funnier.

Let’s check in on how Russia’s draft is coming along.

I wonder why the draft commissioners themselves don’t get on a bus to the front. They appear to be in far better condition than the poor saps getting dragged off instead:

The passivity of the Russian psyche blows me away. It’s an entire society built around the notion that life is shit, but that’s okay because you can drown the pain away with vodka.

1/ What’s life like for newly-mobilised Russian troops in their barracks and temporary accomodation? Terrible, from all accounts, with no heating, no food, no sleeping bags, no hot water, no toilets, freezing tents, bedbug-infested mattresses and no training. 🧵 follows. pic.twitter.com/7KCOmWHsHQ

No matter how bad or incompetent Russian authorities are, no one protests. Those who could afford it fled, and everyone else just rolls with it. Meanwhile, Russia is doing everything possible to kill some of these guys off before they’re even in Ukraine, where they’ll likely freeze to death in trenches if a Ukrainian shell doesn’t get them first. I mean, look at the photo at the top of this story. It’s obvious that none of these conscripts are properly outfitted for freezing rain and the bitter cold that’s fast approaching.

I’ve often written that the challenge with new weapon systems isn’t training the operators, it’s training the maintenance crew. For example, a Patriot air defense system operator trains for 13 weeks before heading off to their unit (where seasoned NCOs continue their education), while the soldiers who maintain it train for 53 weeks—a full year, or four times as long!

In practice, this is what it looks like in Ukraine:

In June, Ukraine received 12 PzH2000 howitzers. After weeks of intensive use, the guns required maintenance, as they are designed to fire no more than 100 shots a dayhttps://t.co/m1B2wys5aE pic.twitter.com/rknASojvJH

Whenever those systems need maintenance, they have to be trucked out of the country, back to Poland, Lithuania, or Romania, where people who know what they’re doing can bring those systems back online. As you can imagine, it’s an incredibly inefficient workaround. Presumably, there are Ukrainian mechanics and maintenance people learning from NATO personnel doing the repairs, but that takes time.

In 1989, my unit provided MLRS support for a cavalry unit patrolling the Czechoslovakian border. Two days after the Berlin Wall fell, a couple of Army buddies and I snuck into East Germany to take pieces of the border wall, and then went to Berlin to grab our piece of the wall. That’s me with the punk rock hair and leather jacket, on the then-East-West German border grabbing myself a historical souvenir: 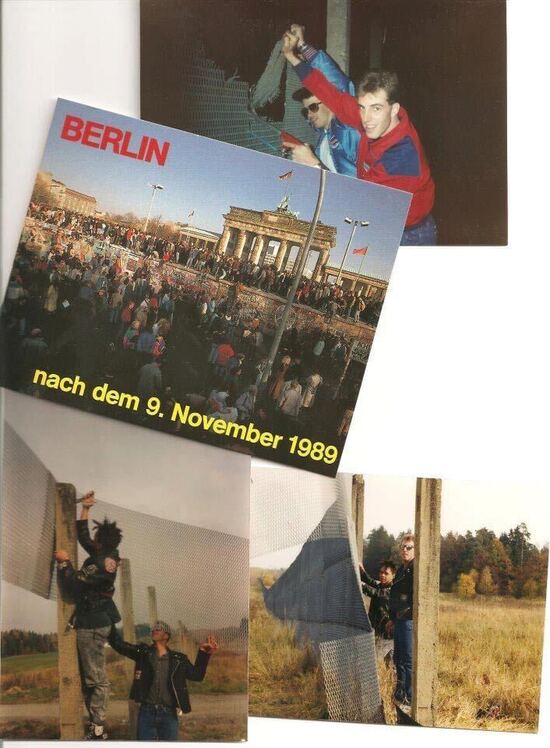 Crazy to think neither of those countries exist anymore in that configuration.

As many of you know, my son is making his way through a pre-Ranger program, and will start Ranger school in two weeks. This is a nice mini documentary on one of the first women to graduate from the school, which also offers a pretty good luck at the grueling school:

You won’t be surprised to learn that the incel “Manosphere” has attacked those women, attempting to belittle their accomplishment. They claim “special treatment” that includes the exact same pre-Ranger program that my son is currently attending. So dastardly! Also, they complain that one of the women was about to quit, and some general talked her out of it. You see, male quitters don’t get a pep talk the way the ladies did. Not fair!

But let me offer a bit of extra context for that video: There is an anecdote about Mountain Phase that is quite telling. At some point during that phase, students must hike up a mountain wearing 100-pound rucksacks (no exaggeration), water, and a full squad’s worth of weapons (which includes heavy machine guns). It’s an all-night, all-day ordeal, all uphill, made worse by severe sleep deprivation and starvation. In the video, a guy says he was carrying extra weaponry and couldn’t do it anymore. Look at him: strong guy, looks a good 160-170 lbs. So he asks for help carrying his load, and no one steps forward (“they all looked like deers in headlights”) except for the 150-pound female protagonist, adding even more weight to her load.

Fuck anyone who belittles their accomplishments. Most wouldn’t last the first hour.

On this week’s episode of The Downballot we get medieval on the traditional media for its appalling display of ableism in the wake of John Fetterman’s recent NBC interview; recap the absolutely wild goings-on in Los Angeles, where City Council President Nury Martinez just resigned after a racist tirade was caught on tape; dive into the unexpectedly close race for governor in Oklahoma; and highlight a brand-new database from Daily Kos Elections showing how media markets and congressional districts overlap.