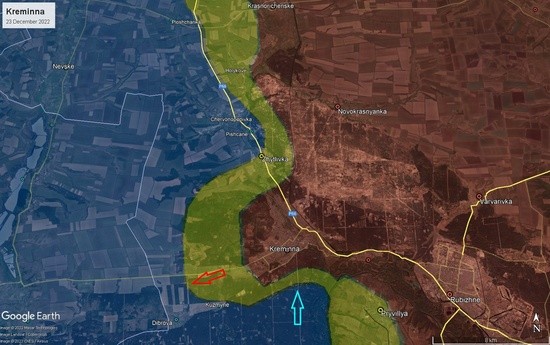 It’s been two months since the fall of nearby Lyman. It was at the the tail end of the lightning liberation of Kharkiv oblast, Ukrainian forces pushed to Kreminna’s edge before Russian defenses rallied and finally held their ground. Ukraine has been grinding its way closer ever since.

Kreminna complicates logistics up and down the Kreminna-Svatove direction. I’d be shocked if that rail line is operational, but liberating Kreminna cuts a second road from that cluster of Kreminna-Rubizhne-Severodonetsk-Lysychansk up to Svatove. There are other supply routes (Starobilsk remains the big logistical hub, and Ukraine’s main target in this advance), but Russia doesn’t do logistics well. removing options exacerbates those challenges. And even if supplies aren’t running that route, the ability of Russia to easily move troop reserves toward a Ukrainian breakthrough along that entire line is severely compromised.

In effect, this cuts Russian forces in northern Luhansk oblast in half.

Additionally, Ukraine is pressuring Svatove from the west, but efforts to encircle it from the north seemed to be bogged down in mud. Taking Kreminna will allow Ukrainian forces to quickly move up that new road to threaten Svatove from the south. Russia may have fortified that approach, but if not, it’s around 25 kilometers of nothing until the first town, Krasnorichens’ke, which is halfway up the route to Svatove.

Ukraine can also look east toward Rubizhne and back to Severodonetsk, which would be quite the accomplishment. We all remember the massive loss of life this summer, as Severodonetsk’s Ukrainian defenders, surrounded on almost all sides, held out eight weeks before falling on June 25. We can fully expect Russia to dump tens of thousands of their mobilized human speed bumps on that approach.

Taking Kreminna also ends Russia’s dream of somehow regaining the initiative in that corner of the map and pushing toward Sivers’k. 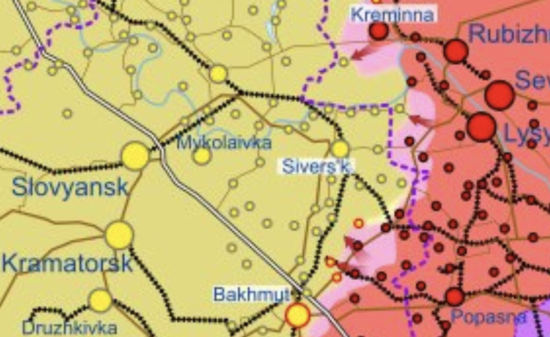 If Russia could take Sivers’k, or at least get close, it would put some key roads and rail back under Russian artillery fire control, and force Ukraine to reinforce those lines rather than accumulate forces for the expected winter offensive (wherever Ukraine decides to strike). Instead, Sivers’k remains well-behind the front lines, Ukraine is happy to bleed Russian forces at Bakhmut, and retains all the strategic flexibility for whatever big offensive comes next.

Oh, and speaking of Bakhmut, Ukraine continues to reverse months of Russian gains in a week-long limited counter-offensive. After pushing Russia out of the city’s easternmost residential blocks and turning the industrial area into no-man’s land (in pink on the map below), Ukraine has now pushed Russia out of the southern suburb of Opytine. (80% liberated, according to most recent reports.)

A close-up map of the approximate situation around the city of Bakhmut.

🇺🇦 forces have continued their advance within Opytne and regained part of the settlement. pic.twitter.com/TrDnYHY7eO

To be fair, Russia captured a couple of settlements to Bakhmut’s northeast, but we’re now seeing a see-saw effect in the area. As we’ve noted before—Ukraine is happy to retreat at first contact, drawing in Russian forces, before counterattacking the exposed Russians back to their original positions (or even further back). I wouldn’t sweat the small tactical moves at this point. Ukraine has it under control. And while I’ve wrongly predicted Russia’s culmination around Bakhmut in the past (how could I expect they’d keep assaulting the city 6-20 infantry at a time, with no armor support?), the functional result is pretty much the same. Bakhmut is under no imminent threat.