What this means for political campaigns

Political figures in need of money are using NFTs to try to raise cash. Roger Stone is attempting to sell a digital photo of a magazine with Trump’s signature to help pay his growing legal bills. Stone also said he’d throw in the actual physical copy of the dumb magazine if the bidding reaches $20k. Melania Trump raised eyebrows for recently issuing a series of NFTs to raise money—for herself. One image showcased her wide-brimmed white hat, and the other image featured her constantly half-closed eyes. 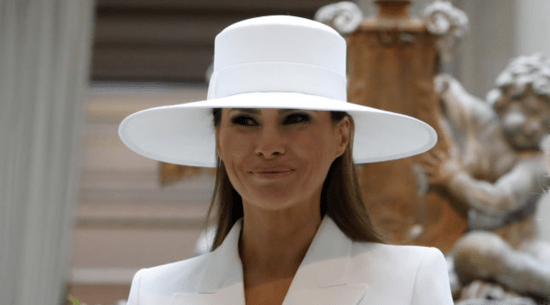 Melania and her hat

Unfortunately for Melania, the auction was a total flop. She needed $250,000 but only got $170,000 after attracting a grand total of five bids. (Ouch!) In fact, public records on the Solana blockchain indicate that the winner came from the same address that minted the NFT, meaning that the winning bid likely came from Melania herself to save face.

She even tried to attract bids by promising that a portion would go to charity, but in true Trump fashion, she and her team refused to say how big that portion would be, even after repeatedly being asked. No one has ever accused the Trumps of not being shameless.

Disgraced political figures aside, where NFTs are really changing the game is in this year’s midterm political campaigns. Candidates are figuring out ways to use them not just to cash in, but to reach out.

“If you use NFTs for donor or volunteer recognition, it’s a much more impactful way to recognize supporters than a tote bag or a T-shirt,” said Tomicah Tillemann, the global head of policy for the crypto investing arm of venture capital giant Andreessen Horowitz, a heavyweight backer of blockchain startups.

”NFTs could emerge as a breakout technology in the political space for campaigns in the ’22 cycle simply because they are a much more powerful mechanism for demonstrating support for a candidate than most of what’s available today.”

Republicans seem to have gotten into the game first. Max Rymer, a digital consultant for Minnesota Republican gubernatorial candidate Dr. Scott Jensen, decided to use NFTs to bring in a younger demographic along with some good press. Their gamble paid off, as Rymer told ABC News, “We’ve added 2,500 new people that are going to support our campaign going forward.” The NFTs show Jensen at the infamous Minnesota State Fair either eating a corn dog or carrying a cow. The campaign made each available to purchase and ended up making $25,000.

They are no longer on sale at his website, likely because the limit was reached. Just like physical items, the purchases constitute a donation, and there are laws limiting who can purchase and how many can be purchased. Minnesota law puts a cap on donations of $4,000 for an individual and $8,000 for a couple.

I will admit the images are very folksy, especially considering they are for a quack doctor under investigation for spreading COVID-19 misinformation.

Blake Masters is another political candidate who has also gotten into the NFT game. Masters is an ​​election conspiracy theorist running for Mark Kelly’s Arizona Senate seat this year. He has gone all in on Trump, and has the backing of his billionaire boss, Peter Thiel, who has pledged $10 million to help him.

Masters offered to sell the image of the cover of his book that he wrote with Peter Thiel. Unlike Jensen, who made many digital files to sell them as cheaply as possible, Masters purposefully created only 99 to sell to top donors for the maximum $5,800 campaign donation. To give a little more incentive, Masters promised “exclusive access to parties with me and Peter.” (Gross.) The ploy worked, and he raised nearly $575,000. Expect Thiel to repeat this strategy for other Trumpian candidates he’s backing.

There has been at least one Democrat who is using NFTs for her campaign, and she happens to be a technology executive. Shrina Kurani, the vice president of a financial tech firm, is running for Congress in California. She holds the distinction of being the first federal candidate to use NFTs in a campaign. She quickly raised $6,600 in just 72 hours late last year by selling 21 NFTs representing “vision and concept statements” for emerging technologies. She advocates for legislation to better address tax and accounting rules for crypto.

‼️This is huge for the NFT community‼️
Shrina Kurani, a Democrat running in California’s 42nd Congressional District, will publish 2,022 non-fungible tokens (NFT) on the Solana blockchain today as part of her election campaign!https://t.co/i4oznLCpKY

There’s very legitimate concerns about the environmental impact of the blockchain, for both cryptocurrencies and NFTs. This has blunted other Democratic candidates from rushing into NFTs, since climate change is such a core tenet of our party. Yet on March 14, Kurani announced a launch of several climate-focused NFTs on Abris, which is dubbed an “environmentally friendly” marketplace built on the Algorand blockchain.

The Algorand blockchain claims to be carbon neutral, due to offsets and the algorithm it employs. The algorithm, called “proof of stake,” doesn’t use as much energy as the ones used by other blockchains. (For an explanation on the difference between “proof of stake” vs. “proof of work,” click here.) Her new campaign is selling 230 NFTs to represent the 230 billion tons of carbon remaining in the world’s “carbon budget.”

If the environmental question can be answered, expect to see many more candidates embracing NFTs. Currently, a group of Democratic operatives are planning on turning political memorabilia and photos into NFTs that can be used for fundraising. An entire liberal NFT marketplace, Front Row, is already partnering with Democratic campaigns and causes. Their first client was the Texas Democratic Party, which is selling digital collectibles. One successful set has been electronic versions of the arrest warrants—in the form of “Wanted” posters—for the brave state representatives who left the state last year to deny a quorum in hopes of slowing down the Republican assault on Texas’ voting rights.

Another Democratic fundraising firm called Numero recently launched electables.com, a platform for campaigns to offer NFTs that would also allow supporters to show them off. Numero CEO Brian Forde, a former Obama administration official, said his service allows campaigns to give grassroots donors a one-of-a-kind, hand-illustrated NFT that can be customized when they buy other merchandise.

In addition to attracting new supporters and getting press, there’s another benefit to getting involved with NFTs. This cycle has seen more wealthy tech entrepreneurs, tech start-ups, and crypto advocates getting into politics out of frustration with government regulations governing their industry. They have complained that the current regulations are unclear and illogical.

Democrats like Kurani have seized on this to fuel their campaigns. In fact, a new Political Action Committee, HODL PAC, is supporting crypto-friendly congressional candidates. Kurani was one of their first beneficiaries. New candidates are viewing this as an issue to attract a new means of support. HODL PAC is even planning a series of NFTs for their preferred candidates that would function like membership cards or campaign pins depending on the level of donor, according to their founder.

Typically, the technology sector outpaces federal government policy. There is something to be said for having forward-thinking elected officials focused on constructing legislation that will maximize the positive impacts of new technology and minimize the harm. That’s the theme for Steven Olikara’s campaign for Wisconsin Senate. He too is utilizing NFTs to fundraise.

Although the Federal Election Commission has issued some guidance for accepting cryptocurrency contributions, there is a lot of concern that their sale in a campaign might trigger regulations aimed at investment products. This can happen if people sell fractions of individual NFTs, or an “NFT basket,” which would make it an investment product called a “security.” Securities are investments that are held in the anticipation of an increase in value that are traded in a market, and they are very tightly regulated. The Securities and Exchange Commissioner, Hester Peirce, warned that the “fractionalization” of individual NFTs could prompt the agency to crack down.

Like everything else, NFTs are complicated. I’m not weighing in on whether a political campaign should use them or not. Since they are so popular right now, they can certainly be used to grow interest and create needed community engagement with a campaign. Moreover, they have proven a good way to grow capital. On the other hand, as with any new technology, there are pitfalls that need to be looked at before jumping in. If you do decide to sell NFTs, hire a consultant or firm that knows what they are doing.

Ensure anything you sell is original, and closely monitor and record the sales of any NFTs created. The cost should be high enough to cover the extraordinary fees, but not too high. Be prepared to address the very legitimate concerns of the environmental impact from your constituents. At the end of the day, it’s your call. Just know that whatever you decide, NFTs aren’t going anywhere anytime soon.