Why Bakhmut is not a strategic goal, but is vitally important to Ukraine 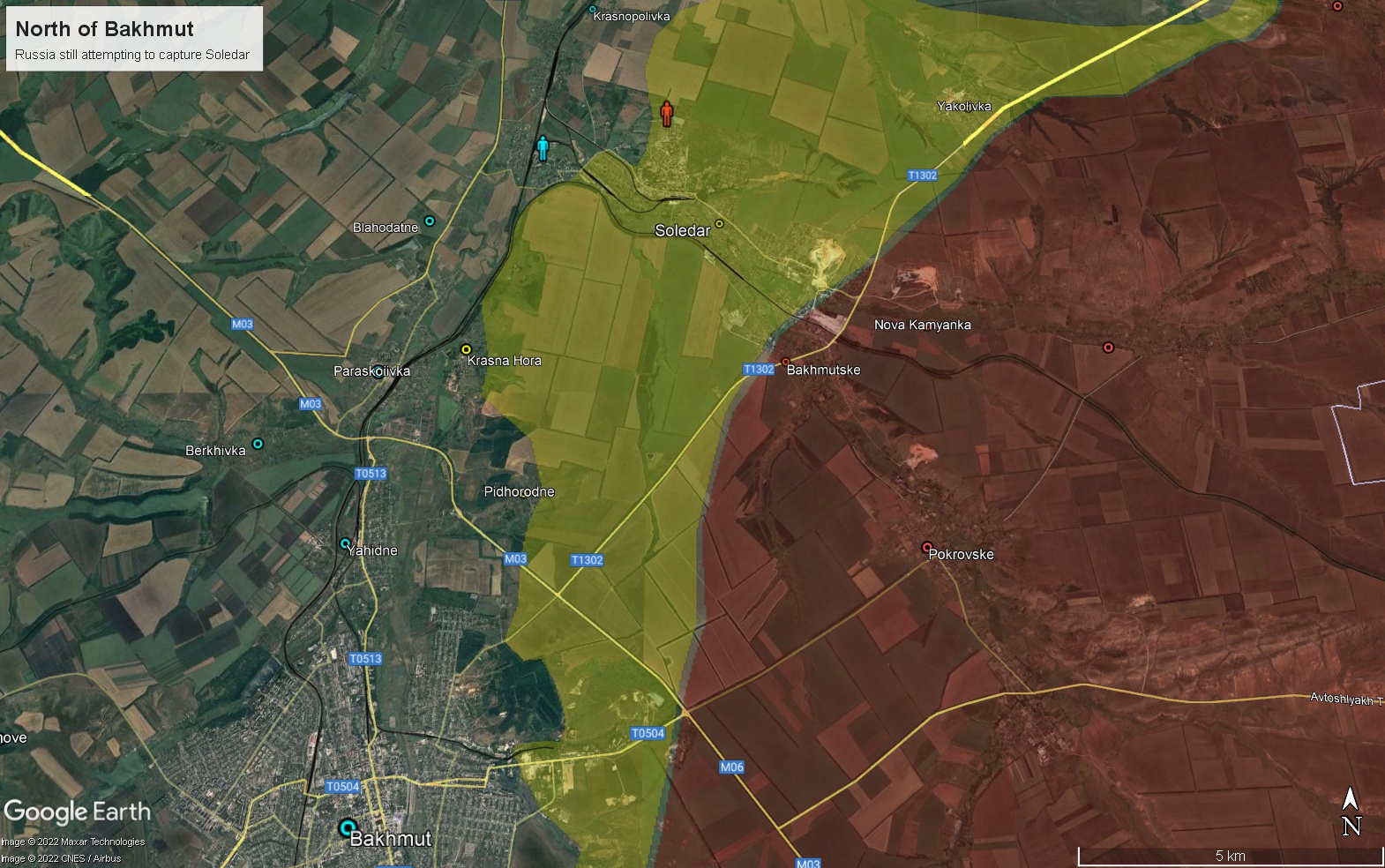 North of Bakhmut. Open image in another tab for a larger view.

In the whole area north of Bakhmut, the lines haven’t changed much in the last 24 hours. Additional images and videos have allowed the boundaries of the Russian advance to be refined. Reports of small Russian assaults being repulsed from Krasnopolivka and other points north of Bakhmut indicate Russia (or rather, Wagner) hasn’t yet cemented control over the area well enough to organize a serious next step.

Even if Russia’s claims to have captured all of Soledar remain untrue, that doesn’t mean Russia’s advance in the area hasn’t been significant. Two weeks ago, the line of dispute fell through the villages of Bakhmutske and Nova Kamyanka. Since then, Russia has moved the boundary in this area roughly 5 kilometers to the northwest.

They did this in spite of the fact that Ukrainians were largely occupying positions that they had prepared for defense over weeks or months. They did this over open ground using the same tactics that Russian forces have used consistently across multiple conflicts: Prepare the route with heavy artillery, then follow with waves of infantry. All of this is bad.

No, this doesn’t mean that taking two-thirds of Soledar is the equivalent of Ukraine’s counteroffensive in Kharkiv, or that even a complete retreat from Bakhmut would be a bigger loss than Russia’s retreat from Kherson. Of course not. The pro-Russian channels making exactly those claims are ridiculous.

However, that doesn’t mean that what’s happening north of Bakhmut can be dismissed. It’s easy to say that “Bakhmut is not a strategic target,” but clearly both Ukraine and Russia believe this is a location worth the expenditure of thousands of lives. In the case of Russia, some estimates place that number at around 20,000 losses in this one place on the line. (And yes, there are sources currently claiming that Ukraine has lost 55,000 soldiers in the defense of Soledar. Those sources are known as tankies in need of serious help.)

To see why Bakhmut both isn’t and is worth all the bloodshed going on around it, let’s first expand the view. 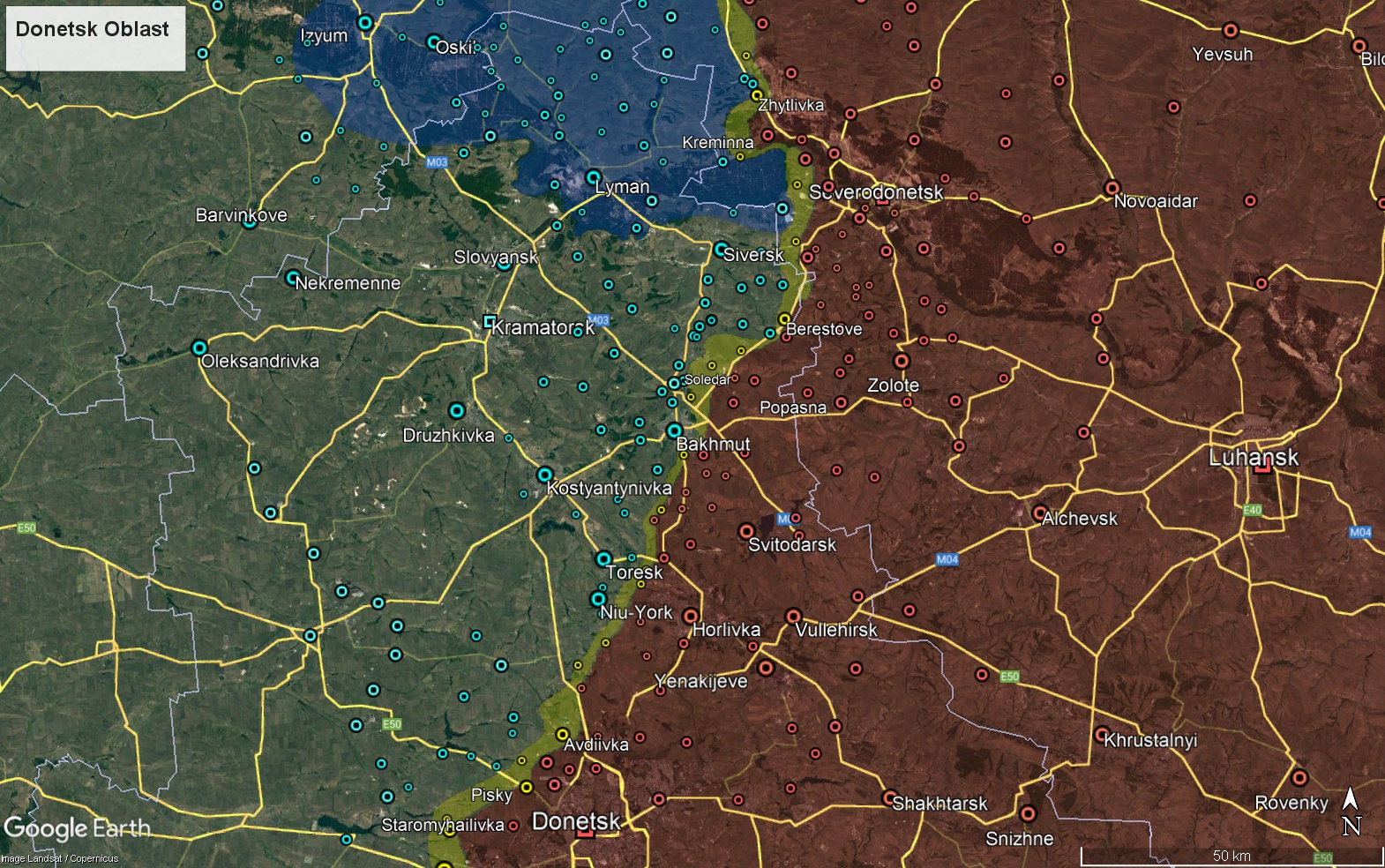 Northern Donetsk Oblast centered on Bakhmut. Open image in another tab for a larger view.

Bakhmut is roughly at the center of this map with Soledar just above. Down at the bottom of the map is the city of Donetsk, where Ukrainian forces have held the line against attempts to break out of the area since the war began. Now, locate the pale blue line that runs just east of Oskil near the top of the map and trace that line around. That’s the boundary of Donetsk Oblast. Obtaining all of that oblast has been not just one of Russia’s strategic goals in this invasion, but one of the targets it set in 2014.

Now, why does Russia want Bakhmut?

Well, look at it. For one thing, it’s in the middle of a series of road and rail junctions. Capturing them would not only give Russia better access to the the surrounding area, it would make it more difficult for Ukraine to supply its front-line forces and shift troops along the line. That has value.

When the war began, the line between Ukrainian control and Russian control was 25 kilometers east at Popasna. I wrote a lot about the importance of Popasna in the the early weeks of the invasion. The map below shows how a small area of the front stood in mid-April. 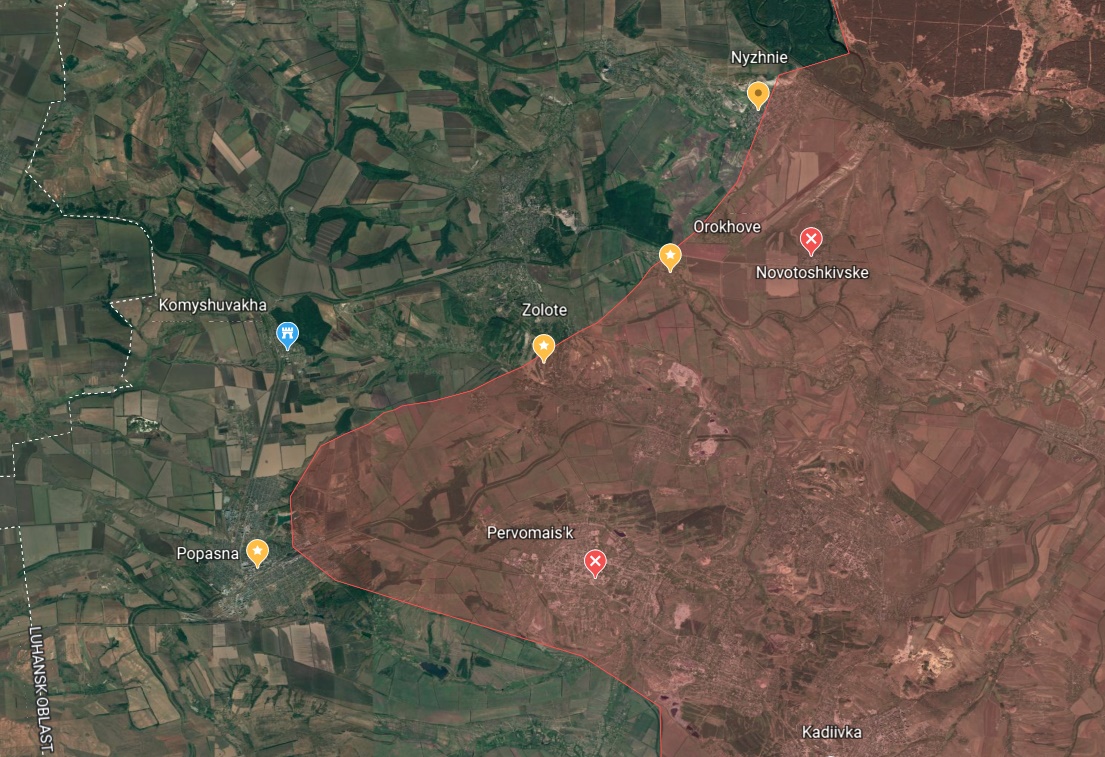 From April. Popasna was the front-line position for Ukrainian forces when the invasion began, and one of Russia’s first targets.

Stop me if this sounds familiar: Over a period of weeks Russia pulverized every building in Popasna, leaving not a single residence or structure intact. Ukrainian forces staged one heroic defense after another, holding back waves of Russian assaults that left the fields east of the town covered in broken tanks and shattered bodies. The bodycount of Russian losses was sickening, but Russian forces kept coming, pushing Ukrainian troops west mostly by using artillery to shatter every possible shelter in the town. Eventually, when Ukrainian soldiers had been pushed from their defensive positions, Russia was able to make an assault that got their forces within the ruins of Popasna. Over a period of days, they engaged in house to house fighting while new waves of Russians moved forward to reinforce the gains. On May 7, after 72 days of constant attacks, Popasna was captured. Russian forces came through that opening in the lines to assault positions to the west and north. Ukrainian troops were forced to abandon prepared positions and move back.

In the 251 days since Popasna fell, Russia has moved west from there at an average rate of 0.1 km (or not quite a soccer pitch) a day, but that’s an obvious oversimplification. Russia largely gained ground in the weeks immediately after Popasna fell and has been stuck in the same little area within 5-10 km east of Bakhmut ever since.

Bakhmut represents a roadblock in a path Russia has been trying to carve since before day one of this invasion. It’s an important transport junction and key piece of Ukraine’s second line of defense established after points like Popasna were captured.

Now, let’s wind the clock back a few months in another area and see why everyone—myself included—so easily falls into saying that “Bakhmut is not strategically important.”

Early April. Map of the Russian salient to Izyum.

Those who have been following the progress of this war from the beginning are likely to remember the long red finger of the “Izyum Salient” stretching across Kharkiv Oblast. Launching out from Svatove, Russian forces secured the bridge at Kupyansk then day by day began moving west and south toward the city of Izyum, where eventually—thanks to someone who helpfully showed Russian forces a low-water crossing—they were able to get behind defending Ukrainian troops and capture the city.

Right below that big “potential breakout” text is that location that everyone can agree is a strategic target of Russia: the neighboring cities of Kramatorsk and Slovyansk. With Donetsk city under Russian occupation since 2014, this area has become the de facto capital of Donetsk Oblast in Ukraine. It represents the most populous, most industrialized, and by far the most valuable location in the area. When Russia says they intend to take all of Donetsk Oblast, what they really mean is Kramatorsk. The rest is cleaning up.

By mid-summer, Russia had that area surrounded. They had Izyum to the northwest. They had Lyman to the north. They had Severodonetsk and Lysychansk to the east. And they were pushing into Bakhmut from the southeast.

Russia fully expected to place Kramatorsk in a “pincer” that closed on it from all sides. In fact, that capture of Izyum already made supply to the region a PITA that often required forces and materiel to move south then east, then north—often through Bakhmut—to reach Ukrainian lines north and east of Kramatorsk.

Then … bam. The Ukrainian counteroffensive in Kharkiv swept Russian forces out of Izyum, Lyman, and Bilohorivka, leaving the Russians at Lysychansk much more worried about digging in for defense than advancing on Kramatorsk. Obviously it was a lot more complicated than that. The full story included a number of tiny “hero towns” south of Izyum that withstood everything Russia could throw (kos is promising a book on this—hold him to it) as well as Russia’s initial advance culminating due to the limits of their logistical and organizational structures.

In any case, suddenly most of the “pincer” was gone. When the dust cleared, Bakhmut was the only place where Russia was still trying to push toward a goal that had seemed so easily within reach just weeks earlier.

Kramatorsk is still the goal. Bakhmut is still the next step to that goal. It’s just that achieving the goal seems far less likely than it did when Bakhmut was just one potential finger in a big squeezing hand.

So … Is the Bakhmut area important?

Of course it is. It holds not just tactical value in terms of being at a transportation nexus, but symbolic value as the one place where Russia can point to “wins,” no matter the cost.

More importantly, Russia is still trying to capture the remainder of Donetsk Oblast, and no matter how unlikely that now seems, Ukraine has to fight them somewhere. If they walk away from the the Bakhmut area, they’ll just be doing this somewhere else. That doesn’t mean moving the whole show down the road, it means another set of towns being turned into rubble over a period of weeks or months of bombardment.

Bakmut, Soledar, Bakmutske, Optyne, and just about every other town or village nearby has already been reduced to a tragic rubble. Why would Ukraine want to repeat this disaster in another area if they can keep fighting at Bakhmut? Forget the “because Russian casualties are high” reasoning. Russian casualties will be high anywhere the battle moves. Feeding the meat grinder is just how Russia fights.

Bakhmut is important because it’s a sacrifice to protect other towns, villages, and cities from suffering the same fate. And as long as Ukraine can keep the fight in Bakhmut, it will. 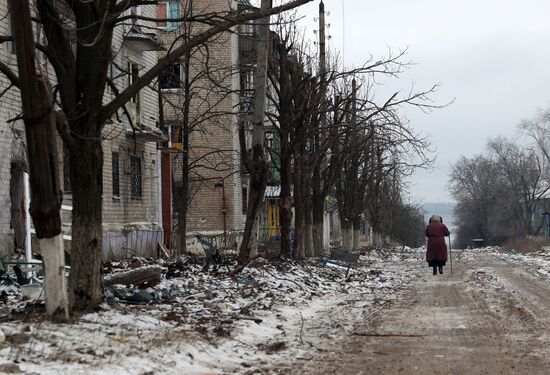 Tomorrow I promise a big Western tank update. We’ll do a tank-off between the three big MBTs that are potentially heading for Ukraine, as well as look at why the German government sometimes seems to be such a d**k. But I’m holding back today because … it’s already past update time.

The British government is expected to officially announce on Monday the decision to transfer Challenger 2 battle tanks to Ukraine reports The Guardian. pic.twitter.com/R2RuLn4fd9