Zelenskyy goes to Bakhmut, ‘the most beautiful words for our comrades in America’

No one is quite sure about the meaning of the name “Bakhmut.” It’s an old name, almost certainly dating to before the 15th century, when the place was an outpost in lands that had been part of an expansive Turkish empire. It may simply be a corruption of the old Tatar word for Mohammed. But I’d like to think it comes from the Arabic name “Bahamut.” In folklore, Bahamut is a vast being who serves as a base for the whole world. Considering the burden the city has shouldered over the last six months, that sounds about right.

In ages past, it wasn’t unusual to see leaders at the head of a battle, but those ages are long past. While Zelenskyy isn’t quite climbing into his own tank and leading the charge across the no man’s land east of the city, his presence in Bakhmut today may be even more vital to maintaining the powerful bond between Ukraine’s leadership and Ukraine’s front-line forces than his rapid appearance in Izyum and Kherson. Pro-Russian military analysts have rushed to their keyboards this morning to state that since they can’t hear explosions in the background, Zelenskyy can’t really be in Bakhmut. Those analysts are dead wrong. They’re also not listening very closely.

What does courage look like? It looks like those defenders who have help Bakhmut against wave after wave after wave of Russian assault. Held in spite of constant artillery barrages. Held even though every building is rubble and every tree is splintered.

And Zelenskyy? That’s also courage. He may not be personally inspecting the trenches (though hell, considering everything else he’s done, he might do that), but he certainly knows that he is in danger every day. This guy … it’s going to take better historians than me to find the right terms.

In other Bakhmut news today, there are competing narratives. Pro-Russian bloggers and Telegram channels are showing a video of a line of fires in a snowy location that they claim is a Ukrainian military convoy destroyed by Russian artillery fire as it attempted to move east from Bakhmut. To be honest, I can’t make out enough in any of these videos to tell what I’m looking at. There are fires and smoke, but there are also vehicles moving smoothly along what appears to be a highway. There’s a snow-covered field, but other videos of Bakhmut today show no such snow. Is this something that happened a week ago? Is it something that happened at all? I can’t tell.

The other narrative is the one of “declining artillery fire.” For the last few days, since the Wagner group forces were pushed from their appropriate home in the garage dump and sent fleeing back down the street, there have been reports that the rate of Russian artillery fire in Bakhmut has been slowing. It’s not stopping—listening in on any video or audio from the front lines is enough to show that the impact of shells is still all but continuous—but front-line sources are reporting that there are fewer Russian shots incoming than there were in weeks past.

Optimists are interpreting this as Russia running low on shells. That idea has already entered conventional wisdom among pundits to the point where people are dreaming up Things That Ukraine Can Do Now That Russia Is Out of Artillery.

It’s true enough that by now Russia has fired literally millions of shells, and not even the stockpiles built up over decades of Cold War paranoia are likely to be endless. If Russia’s rate of fire exceeds its rate of new shell production (and it does), then stockpiles are going to erode. It probably doesn’t help that Ukraine has blown up dozens of ammunition warehouses and captured dozens more in some of their rapid advances.

However, there are a lot of other potential causes for a short-term slowing of artillery fire near Bakhmut. Maybe they’re moving equipment around. Maybe they’re changing out overworked barrels. Maybe Wagner has decided it would be better to have their prison recruits hand-carry those shells.

While Zelenskyy is in Bakhmut, Russian dictator Vladimir Putin has also been traveling. On Monday, he came down to Belarus to visit Alexander Lukashenko. That’s an unusual move all on its own, because in the past Putin has uniformly summoned Lukashenko rather than hauling himself out to Minsk. Does it represent a shift in the power dynamic between Putin and Lukashenko? Who can say.

As you’re attempting to puzzle that out, take a crack at understanding what the “longest-serving European president” is trying to say here.

In addition to continuing a multidirectional push for Kreminna itself, Ukraine is reportedly engaged in a Tuesday advance toward the town of Holykove. Forces are reportedly east of the P66 highway north of Kreminna, fighting along the entrenched hillside that leads up to Holykove. 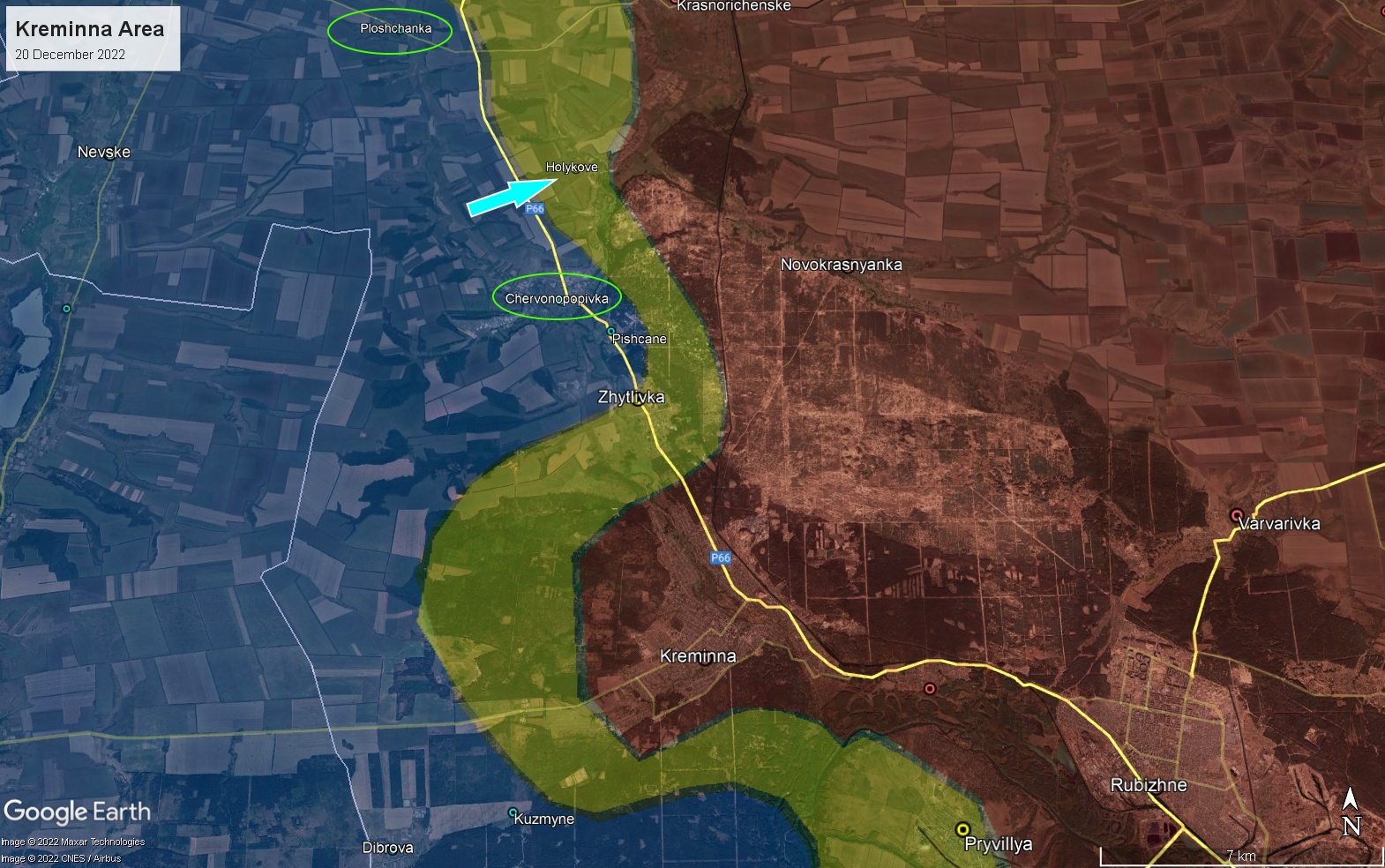 Ukrainian forces move to liberate Holykove. Open in another tab for a larger view.

Holykove has a position that allows Russian artillery to retain fire control over the P66, disrupting Ukrainian attempts to bring forces down from the crossing near Ploshchanka. If Holykove can be cleared, Ukrainian positions at Chervonopopivka will be much better positioned to receive additional forces and supplies for a movement south.

Russian sources report that in the area of Zhytlivka, a unit of the 30th Motorized Rifle Brigade and Russian “BARS-20”, 1.5 days ago began an disorderly withdrawal without a corresponding order, having lost centralized control and suffered losses in killed and captured. pic.twitter.com/d44KgzjdgE

There were multiple reports like the one above over the weekend, indicating that Russian forces in Zhytlivka were retreating south and that Ukrainian forces were expected to occupy that location. However there’s been no subsequent update on positions in this area. Ukraine continues to press Russian forces in Kreminna from both the south and west.

If a visit from the president wasn’t enough, Bakhmut had someone drop by who is even more important.

St Nicholas came with weapons and wearing a bulletproof vest under his robe.

But he still brought joy and gifts to people in Bakhmut and other places near the frontlines.

Ukrainian Santa: “If those Russian bastards try to do dirt to Ukrainian, St. Nicholas will show them!”

And then he hands out toys to kids who are still there in Bakhmut. Because he’s Santa, dammit.

These are Turkish A-400 transport planes which have been trapped in Kyiv since the war began and the airspace over Ukraine was closed. They flew out of Kyiv today and back to their home base inside Turkey. Whether this is a one-off, or the beginning of more flights in and out of Kyiv, it’s good to see some traffic at the Kyiv airport.